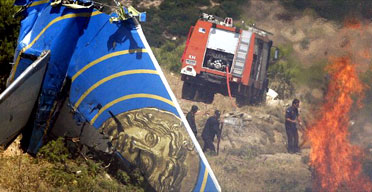 AZAD-HYE (14 August 2005): Just one day before the day of Assumption, when many people in Greece and Cyprus take their annual summer vacations, a tragic airplane incident changed the mood of the millions.

A Cypriot plane belonging to Helios Airways crashed into a mountainous area some 50 kilometers north east of Athens, causing the death of all 121 passengers and crew members on board, including 48 children, the majority of them Greek Cypriots.

It is unfortunate also to hear about the death of one Armenian family amongst the victims of this airline disaster.

Hagop Tutunjian, a Cypriot Armenian, was heading to Greece with his wife and two children to spend the summer vacations. Their demise will leave a big wound in the Cypriot Armenian Community. Click Read More for additonal information.

Hagop has been working in a cable company in Sharjah (UAE) until 1986. He was known to the Armenians as “Jack”, a very helpful personality who contributed to community life and used to play football in Sharjah and Dubai, participating in many football tournaments.

Back in Cyprus he was nicknamed “Akouli”. He was also active in the Cypriot Armenian Community as member of the School Board of the Narek School.

Our prayers go to all the victims of the Helios Airways plane.

Photo from Associated Press showing the tail of the Helios Airway's plane in a valley near the historical Marathon village, north east of Athens.