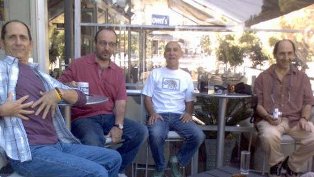 It was in 1979 that these four youngsters decided to make the big move – to leave their lives and families in and return to . They packed their stuff into a huge van and drove all the way through Europe to arrive to their birthplace, which they had left in the sixties, after the inter-communal troubles in .

After the 1974 Turkish invasion, when many Armenian Cypriots had already left for “safer” destinations and none of them ever considered to return to , these boys took a very courageous move to return to their roots.

Their first venture was the opening of a pioneering disco club; Roxy, where one could listen and dance to the latest music. One could also watch the relative video clips on the screens, which was a novelty back then.

It didn't stop there though. The owners of the band were the rockers that performed live every night: Karl Tate on vocals and lead guitar, George Kay on the synthesiser, Duke on the drums and Shawn Tate on base guitar.

We are of course talking about Karekin Tateossian, Kevork Kouyoumdjian, Baret Bedelian and Shahe Tateossian (appearing left to right in the photo), who went on to open up the first skate park in Cyprus, the Arena Skate Park in Makedonitissa and then diversified into the newly growing market of PCs and video games and formed the Micromania Group.

Cyclomania for mountain bikes came next, which has recently branched out into clothing and accessories lines for bikers and skate boarders.

A couple of weeks ago, these young lads gathered at their store in to celebrate the 58th birthday of Shahe. (See photo).

In the last 27 years, we have seen many pioneering ideas introduced by these youngsters. Good luck for the next 27!