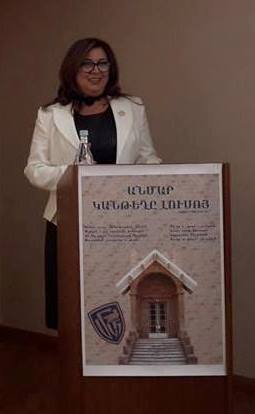 Baydzig Arabian – Kalaydjian’s book “The Eternal Lantern of Hope” (176 pages, size 17 X 24 cm), was published in Beirut in 2016, through the generous donation of a “Graduate of Melkonian Educational Institute.”

The book includes a brief history of the this pan-Armenian boarding high school, which was unexpectedly closed down in 2004, after serving for about eight decades (since 1926), funded by money left by the Melkonian brothers.

The closure was one of the sad pages in the history of the Armenia Diaspora, causing a lot of pain and anger. The caretaker of the institution, The Armenian General Benevolent Union (AGBU), failed to give a satisfactory explanation about the reasons behind the closure. Rumours circulated about the intention of selling the plot of land on which the institution existed. Fortunately, the Government of Cyprus intervened and enlisted the institute as part of the island’s cultural heritage.

Almost every year after the closure, the graduates manage to gather in Nicosia, Cyprus. A strong bond exists not only with the physical premises of the school but also between the graduates (“Melkoniantsi” as they call themselves).

In her book, Kalaydjian describes the sad moments when the news about the closure was confirmed.

“16th March 2004, is a black day in the memory of the graduates of the Melkonian Educational Institute and all the Armenians around the world. The principal of the school summoned the students, the educational and administrative staff to the main hall and conveyed them the decision taken by the majority members of the Central Committee of the AGBU regarding the closure of the school”, says Kalaydjian. In the book, she describes the emotions that prevailed on that day and the succeeding days in the circles of existing pupils, the teachers, and the graduates.

Today, after more than 12 years, we can firmly state that the graduates of the school succeeded in keeping the memory of their college alive in their lives and the history of the Armenian Diaspora.

The book has five parts: Thoughts of Melkonian graduates, historical preview, the need for preserving the will of Melkonian brothers, interviews and articles.