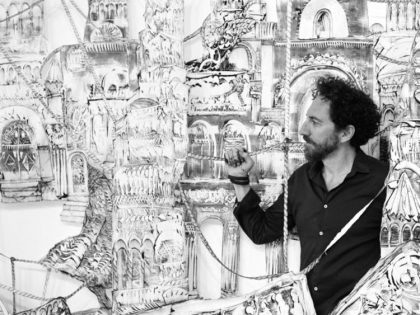 In 2015 Sadek and Mouna Atassi established the Atassi Foundation, a not-for-profit initiative with the aim of supporting Syrian art and culture.

The Foundation’s latest exhibition in Dubai goes under the title: “In the Age of the New Media.”

The exhibition includes the work of several well-known Syrian artists; amongst them the New-York based Syrian – Armenian artist Kevork Mourad.

Dubai based arts-enthusiast Jyoti Kalsi says: “In our digital age when artists are experimenting with various new media, this show celebrates the traditional art of painting and the power and beauty of classical masterpieces that are timeless.”

“These masterpieces represent Syrian art and its Syrian-ness, yet they have universal resonance,” comments the foundation’s director Shireen Atassi.

Kevork Mourad participates with a work called “Time Immortal.” He has used acrylic on white muslin fabric to paint historical structures and scenes that represent the history of Syria and the broader region. The structures include churches, synagogues, the Tower of Babel, The Hanging Gardens of Babylon and old Roman pillars. He has arranged the paintings into several layers, representing the multiple layers of history, religion, and culture that have shaped the Syrian identity.

“Syria has been a melting pot of various cultures and religions since the Mesopotamian civilization, and through this piece, I want to explore the complexity of living with such diversity and the challenge of maintaining one’s cultural identity in a multicultural environment,” Kevork Mourad says.

“It is necessary to travel into its past to discover the many layers that make up a society,” he adds.

Note: The exhibition will run at the Atassi Foundation in Warehouse 59, Alserkal Avenue, Dubai, until 16 December 2018.