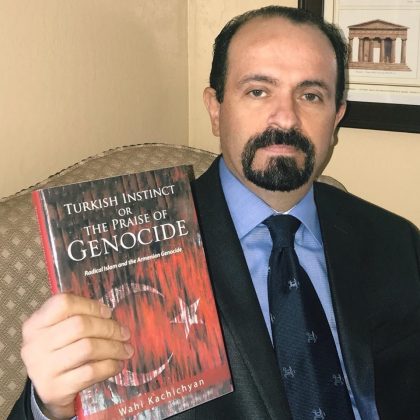 How did the idea of publishing the book matured in your mind?

The book was published in May 2018 by Exlibris – Indiana – USA, and is being distributed worldwide. The idea came in consideration of several factors. The original idea was to write a book on genocide in Armenian. Then for a while I considered writing it in Italian and, finally, I opted for the English version, having in mind that it will have a wider reach.

Let me underline that I am personally very critical to our leadership, both ecclesiastical and secular, in the past and present, though in the book I avoid this topic since it basically targets a non-Armenian readership (We keep nurturing the idea that we are a very smart people, but then fail to explain how we were dominated for more than 600 years by the “backward” Turks?). In this context, do we really have a national political? Do we really understand what national interest is?

Secondly, are we investigating the Genocide in an appropriate manner? Are we providing the Western audience with the right tools to understand it? Why the Turks are successfully telling lies to the international community through misinformation and falsification?

My critical approach tells me more: The so far available genocide books, say the classics – which I do respect – are written by experts for the experts. They use complicated terminology, unlike mine which uses accessible wording and addresses the mainstream educated Western social strata. That’s how we can spread the word and raise awareness. We should be very selective in our genocide-narrating methodology. Mine is a Western version of Hrant Dink’s strategy which aimed at educating the Turkish civil society.

My third consideration is based on my Western experience. What are the main questions and concerns of an Italian or an American? What would they ask me first once they know I am an Armenian? Surprisingly the first question is: Are you Christian? Then, why did genocide happen? And more surprisingly they have no idea who the Turks or the Azeris are. Few people do really know about Pan-Turkism or Pan Turanism. So our duty is to explain why Turks have considered us as an enemy and have planned to eliminate and destroy our people, homeland and civilization.

Finally, behind the idea of writing this book was the sense of fulfilling a moral duty toward our genocide victims. We simply cannot drop the idea.

Do you think that one day Turkey will have a leadership that can pave the road to the Genocide recognition?

That day is far away, for now. Today that would be science fiction. As long as Pan-Turkism is alive – which by the way constitutes the cornerstone of the Turkish politics – Turkey won’t consider us a legitimate party with whom to engage in a serious dialog. And Pan-Turkism wasn’t made by Erdogan, it dates back to the early days of the Ottoman Empire. See how Azerbaijan views Artsakh and rejects any negotiating idea. Turks won’t negotiate with us; they understand only the battlefield language, that’s how they built an Empire. And on the negotiating table we have been always the losers. We are unable to evaluate how deeply Pan-Turkism is rooted in the Turkish DNA. In 600 years down to these days no Ottoman or Turkish leader has ever wished to talk to us: the elimination of Armenia is their topic. Again, Hrant Dink’s strategy was the right one: targeting the civil society, but this process is too long. We have never had a strategy against Turkey. The point is that we speak out of right but they speak out of force. I think they will never ever recognize the Genocide. How they could if it would explicitly result in the disintegration of Turkey as a state? The thing is that Turkey has the full endorsement of the West, as Ottoman Turkey had. Remember Yitzhak Rabin? He wanted to negotiate with the Palestinians, he was shot dead… We need many generations in order to educate the political establishment.

Reconciliation needs dialogue. How do you envisage that this dialogue can evolve? Are there any signs now? Can we consider the 2008 football diplomacy as a first attempt into the right direction?
Turks reject both reconciliation and dialogue. They would engage in a dialogue only if they are potentially able to benefiting from it. Turks have always fooled us, they do have a national diplomacy, but we don’t. What has Armenia done in the last 25 years? NOTHING. Not even a feeble attempt for strengthening our positions by bringing forth the Nakhichevan issue or reaffirming our historic rights over Kars and Artahan regions, which were part of the First Armenian Republic. We could have referred to the Wilsonian Armenia. All these could be interpreted as strong messages to both the Turks and the Kurds.

We expect from other nations to do what we should be doing ourselves, but…we don’t have competent and professional leaders.

Furthermore, if the precondition of dialogue is the exclusion of genocide and unconditional recognition of the Turkish state in its current territorial state, as mentioned in the 2009 protocols, well, that’s not a dialogue. I am very happy that the Turkish Parliament did not ratify those protocols, we should thank them. In diplomacy we can’t compete with Turks, and if they have nothing to gain from any dialogue, then why they should be negotiating with us? Now that Turkey has become a radical, xenophobic, racist, expansionist and authoritarian dictatorship… there’s no chance at all for any rapprochement. And the best way to fight against Armenians is fomenting Radical Islam. We should understand the message. Again, we need a brand new strategy.

As you have pointed out in your book, all countries that have committed Genocide have taken steps toward real reconciliation with the survivors, except for Turkey? Can a truly democratic Turkey in the future overcome this barrier?

Turkey is a unique country. Reconciliation and refraining from anti-Armenian activity would result in the end of Pan-Turkism. This ideology is the longest-running and persistent one in the Turkish political reality. Other nations that have committed genocide have acknowledged their misdeeds due to regime changes. In Turkey any regime endorses the Pan-Turkic, Pan-Turanic and Pan-Islamic ideology, so that the sword of Damocles is always there. Genocide is the other side of the coin. This means that without committing further genocide Pan-Turkism cannot advance. The two are organically connected. This ideology is so important for Turkey, that if it ceases, it may mark the end of the state itself. Turks have slaughtered almost all the Christians of the Middle East in the name of this Pan-Islamic ideology. The Turks have pretended to be a democratic people. The Westerners still believe in their democracy. No Western democracy has persecuted or murdered so many minorities in the span of history and during modern times. And who said genocide is over? We may witness new genocide attempts in the coming decades, against the Kurds and the hidden Armenians in Turkey. “Turkey for Turks” slogan is still alive, although Turks are only one of the many nations that populate Turkey as they were during the Ottoman times. Turkey will never evolve into a genuine democracy: Political Islam and democracy can’t co-exist.

We should analyse and understand our enemy and never underestimate it. In order to keep the land in they captured from other nations in their hands, the Turkish politicians will be willing to instigate more killings: that’s the Turkish Instinct! Wherever Turks would move they will bring havoc and terror. Had the Europeans let them in the European Union they would have Turkified Europe, which, by the way is a program in progress even nowadays. Turkey is equally eager to move Eastward to join the Turkic nations in the Caucasus and Central Asia by overpassing and destroying Armenia. This is an everlasting threat that should keep us awake as a nation, least we disappear.

About the author:
Wahi Kachichyan (or Vahe Keshishian) Ph.D. is an independent scholar and political scientist graduated from Italy, specialized in International relations and Armenian Studies.
He served in Rome, Italy, as the advisor to the Ambassador of Armenia to the Holy See.  Earlier he has worked also as translator, teacher of Armenian language and Principal of an Armenian school in the Middle East. As an expert, he has been focusing his research on the subject of the Genocide and Diaspora challenges in order to identify the best policies for overcoming the consequences of the Genocide. He is married and has three children. He resides in California, USA.