Father Nareg Lousinian anointing one of the icons.

(Azad-Hye Special) Anna Shahsuvaryan who signs her works using her father’s name Martin, is a contemporary Greek Armenian iconographer who was born in Yerevan and lives in Greece, her mother’s country. She has studied iconography in Cyprus and attended seminars in Bethlehem, Palestine.

When the Kessabtzis (the people of Kessab) were driven out of their ancestral town in March 2014 by the militants, they took refuge in the coastal city of Latakia. Like most Armenians worldwide, Anna Martin followed their plight with great concern.

“It was at that time when I came to know father Nareg Lousinian. Seeing all the destruction happening in Kessab, I was thinking to find a way to contribute with my art work”, she says.

“Several months later Kessabtzis were lucky enough to return to their homes. This created an opportunity for offering my services”, Anna says. 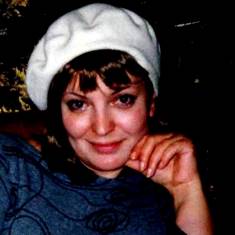 She contacted Father Nareg and donated two icons. Several individuals in Greece helped her to transfer the icons to Lebanon and from there to Kessab.

“I wish the war ends soon. I am fully confident that Armenians will take part in the rebuilding process. Myself, I will continue to paint icons for the churches in Syria. This is my humble contribution”, she explains.

Anna talked about her feelings when the icons were transferred to Syria. “I was moved when I heard that the icons were anointed on the 24th of April. One icon was dedicated to the victims of the Armenian Genocide and the other to the memory of Kevork Jurian, who was killed during the first days of the three months invasion of Kessab”, she said.

The Syrian Armenian town of Kessab and the Armenian Catholic Saint Michael Church (in the middle of the photo).

The icon of Holy Virgin and the Child Christ to adorn the walls of the Saint Michael Church in Kessab.