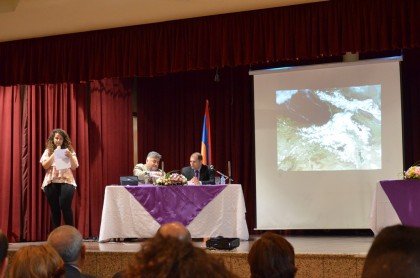 (Azad-Hye Special) The Genocide Centennial Committee of the UAE Armenian Community organized on 15 May 2015 a round table discussion in English on the subject of the “Armenian Genocide Reparations File”.

The speakers were Henry C. Theriault, Professor of Philosophy at Worcester State Collage, and Ara Papyan, former Ambassador of the Republic of Armenia to Canada.

Moderator Dr. Vartkes Arzoumanian underlined that the recognition of the genocide by the Turks has been a priority for the Armenians since 1915. The issue has been of highest priority in recent years. In 2007 an Armenian Genocide reparations group was formed to provide an in-depth analysis of the reparations issue. Both Theriault and Papyan have been members of this group and have contributed significantly to the group’s work.

Speaking about reparations, Theriault mentioned that many people (Armenians or not) now see genocide denial as the key issue in addressing the Armenian Genocide, and the main blocking factor in the way of achieving reparations.

Theriault referred to the pioneering work carried out by Professor Alfred de Zayas on applying the Genocide Convention of 1948 retroactively to the Armenian Genocide, and his study of other legal agreements and how they apply to the Armenian case.

Theriault explained the term “reparations” as steps to address a great harm that has befallen on a community in a way the tries to eliminate as much as possible the consequences of that harm. He emphasized that Turkey inherits the responsibilities of the Ottoman Empire and has to undertake the reparations in order to minimize the harm done against the Armenians. Without material reparations Turkey cannot demonstrate that it is coming to terms with its own history. Both symbolic and material aspects of reparations are important. Just paying money as a material reparation is not enough and accomplishes little (or almost nothing) if it is not combined with recognizing the Genocide and acknowledging it to in a genuine way to be a great wrong. Symbolic reparations would include the active involvement of Turkey in educating its society and the world on the concept and implications of genocide.

Papyan referred to the process of reclaiming property in Turkey. In the case of the demand for restoration of the properties related to the Catholicosate of Cilicia in Sis and other properties in Turkey, it is necessary to file a lawsuit in the Constitutional Court in Turkey because this is the only authority that can allow the release of documents related to the properties. After that the case can be pursued through civil or administrative courts, but if the results are negative then the case must be taken into the European Court of Human Rights. Even if the Genocide is recognized by Turkey, it does not automatically trigger a process of reparations. Individuals and organizations still need to go to the courts with proper documentation to claim back their properties.

Papyan referred to the treaties of Alexandropol, Moscow and Kars, describing them as “not legal” because they were not signed by parties recognized by international law (Kemal Ataturk, who represented the Turkish side in negotiation of the treaties, did not represent the legal authorities of the Ottoman Empire). On the other hand, the Treaty of Sèvres was signed by internationally recognized parties, but was not ratified.

Speaking about reparations, Papyan made it clear that reparations means compensation for the material loss Armenians suffered. It does not in any way represent “blood money”, because no amount of money can compensate for human loss.

Summing up the discussion, the Very Reverend Father Mesrob Sarkissian, Catholicosal Representative in the United Arab Emirates and Qatar, congratulated the UAE Armenian Centennial Committee for organizing this important round-table discussion. He mentioned that this discussion session has shown once more that the Armenian Genocide is no longer merely an occasion for sadness and lamentation, but has entered into a new phase characterized by new efforts to demand Armenian rights and secure reparations. He invited the audience to familiarize itself with these new developments.

At the end of the event the guests were honored with souvenirs. Two member of the community received awards in recognition of their work: Razmig Bedirian was honored for his role in enlightening the UAE public about Armenian topics through articles in the daily Gulf News; and Victor Baroud, who was the donor-artist of the Arc of Noah on the Church’s outer gate and the sculptor of the Armenian Genocide Centennial monument which was recently placed in the churchyard. 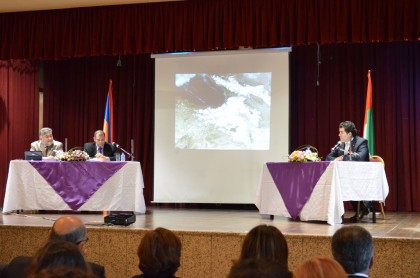 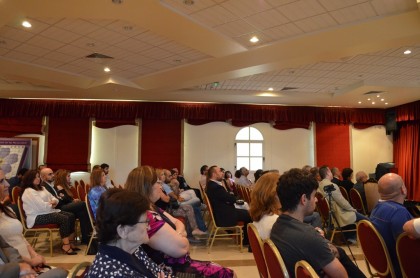 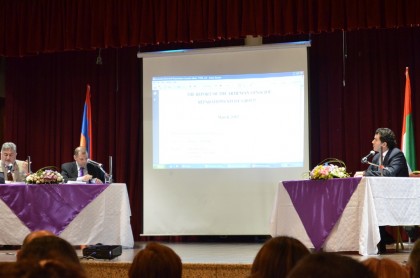 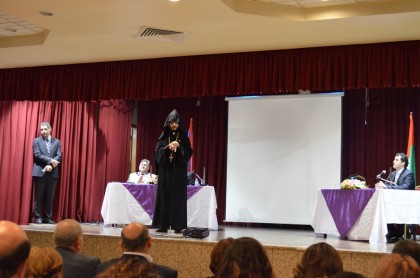 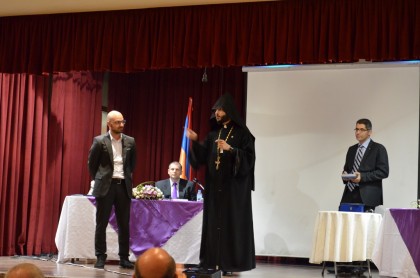 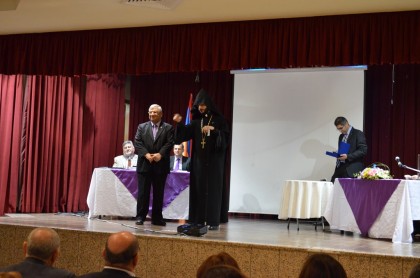 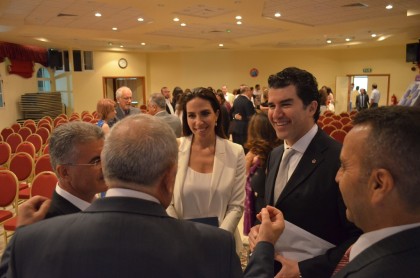 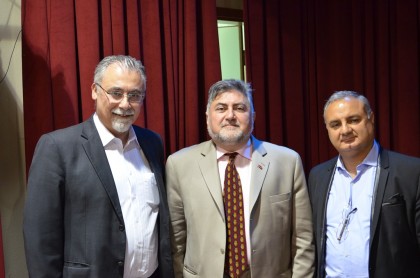 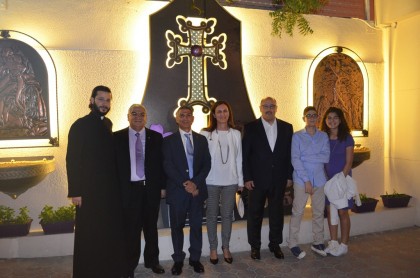 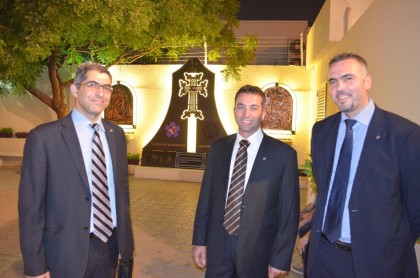 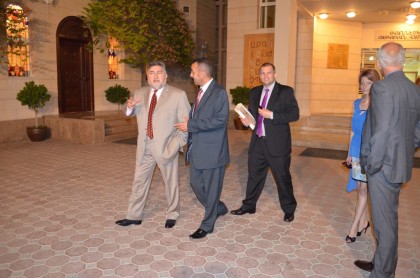 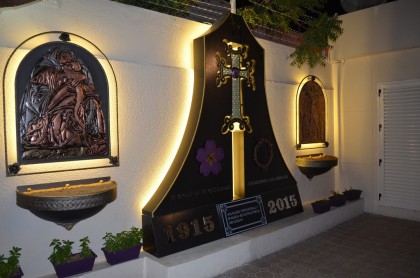