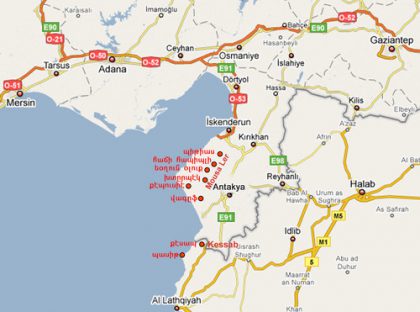 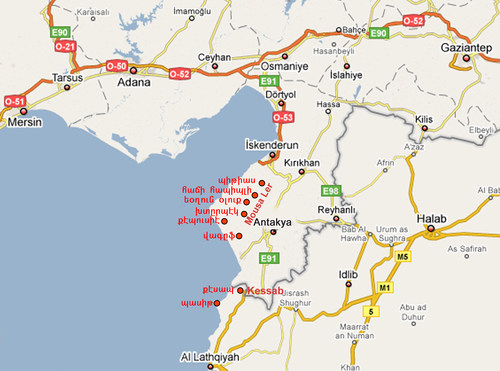 1910 may have been the worst and the best of times for the Kessabtsis ? people of Kessab. The year before, the massacre that started in the city of Adana spread like a wild fire to the other cities of the historical Cilicia and in northern Syria. The pogrom reached Kessab in the latter part of April 1909. In that short span over 30,000 Armenians were killed. 516 houses, 62 businesses, 4 churches were destroyed and 153 people were killed in Kessab alone. The ransack and massacre was followed by a bitter winter in Kessab adding to the misery of the surviving inhabitants who had not been able to tend to their harvest due to the carnage, and they needed shelter and sustenance.

The Kessabtsis, however, responded to this tragedy by rebuilding their lives anew and embarked on an unprecedented program. In 1910, in the aftermath of this tragedy, and instead of dwelling on despair, a group of young Kessabtsis envisioned to establish an educational association , the Ousoumnasirats, not only to further the state of education in Kessab but also to render Kessab a college level educational center for the Armenians in historical Cilicia. The Kessab Educational Association (KEA) was thus born. The founders however could not realize their aspiration. In a matter of a few years the Great Calamity befell on the Armenian people that forever altered their millennial way of life in their ancestral land, the Armenian Genocide of 1915.

Two thirds of the Kessabtsis perished during the genocide. In 1918 the surviving Kessabtsis started rebuilding their lives again. In 1924 the KEA Association established the United Educational High School to meet the educational needs of greater Kessab and in a short period of time the high school achieved a remarkable academic success thanks to a host of dedicated teachers such as the noted educator Hagop Atikian. However, the ensuing political situation put a damper on the academic progress. In 1938 Kessab lost considerable portion of its arable lands to Turkey and the subsequent economic hardship resulted in the great migration of many to Lebanon, America, Canada and Australia. In 1946 and 1947 the great repatriation took place and many Kessabtsis moved to Armenia further depopulating Kessab and curtailing the academic excellence of its schools. The Kessabtsi immigrants however did not let go of the mission of the KEA and established branches in the cities they moved to, such as Beirut in 1951 and Los Angeles in 1957. In Beirut the Association ran an evening school that lasted until 1975 when it became a casualty of the Lebanese civil war. During a quarter of century service, the school, supported by the Kessab Educational Association of Beirut, offered free of charge educational to young Armenian men and women who had dropped out of school early on to pursue a trade.

The KEA of Los Angeles continues to operate, organizing various activities. It runs a camp; it has built a community center and continues to publish a yearbook connecting expatriate Kessabtsis in United State of America, Canada and Australia. This year marks the 50th anniversary of its uninterrupted publication, an unprecedented feat for any Armenian cultural association.

Unfortunately, the KEA could not realize its aspiration of rendering Kessab a college-level Armenian educational center. However, the Kessabtsis both as laymen and clergy, who constitute the rank and file of the KEA, kept the spirit of the Association alive and made remarkable strides in improving the state of education both in the Diaspora and in Armenia, and taught Armenian language and literature to generations of Armenian students. Gabriel Injejikian pioneered the Armenian School in America. Mrs. Anahid Meymarian pioneered teaching Armenian language and literature in the United States, having accepted Gabriel?s call to teach in the new-found school. Mrs. Zvart Apelian became the only female educator to receive the distinguished order of St. Mesrob Mashdotz commendation from the late Catholicos of All Armenians His Holiness Karekin I. Haigaz Terterian spent his adult life teaching Armenian and was awarded St. Mesrob Mashdotz commendation from Catholicos Aram I. Dr. Antranig Chalabian taught in Kessab, at Aleppo College, and later at Hovagimian-Manougian High School in Beirut, before embarking on his career as research assistant and then as a noted and popular historian. George Apelian found an institute for clerical training after teaching at the Armenian Evangelical High School in Anjar.

Similarly, dedicated Kessabtsi clergy gave a unique luster to the seminary of the Catholicosate of Cilicia and educated a cadre of young clergy. Among these educators are Archbishops Terenig Poladian, Datev Sarkissian, Ardavazt Terterian, Bishop Yeghishe Manjikian and Catholicos Karekin Sarkissian. For decades Rev. Dr. Vahan Tootikian taught religion at the Lawrence Institute of Technology in MI, and the Saramazian brothers, Rev. Hovhannes and Rev.Yessai were teachers at their village in Kessab when they received their call for the ministry. Rev Hovhannes Saramazian, a seminary student at Near East School of Theology, was also the principal of the Beirut Kessab Educational Association evening school whose teaching staff were volunteers and mostly Kessabtsi college students. Father Yeghia Kilaghbian left Kesssab at the age 13 to attend the Mkhitarian monastic order on San Lazaro Island in Venice, and is now the Abbot of the Mkhitarian order famed for its Armenian scholarship.

Dr Stepan Karamardian and Dr. Mihran Agbabian became founders of the American University of Armenia. During his short tenure in Armenia as the Catholicos of All Armenians His Holiness Karekin I revived the Gevorkian Theological Seminary. ?Under the supervision and immediate participation of His Holiness, the educational curriculum of the seminary underwent fundamental changes. To guarantee a high level of education, doctors, professors and candidates of sciences–who had devoted their lives to educate Armenian youth and develop sciences–were invited to teach in the seminary.? (Wikipedia).

Thus the same spirit that drove the founders to establish the Kessab Educational Association in 1910 drove many Kessabtsis to further education in the Diaspora and in Armenia.

Kessab Educational Association is now 100 years old and it may be the oldest educational association in the Armenian Diaspora. It predates Hamazkayin Cultural Association by two decades. The Kessab Educational Association of LA may be the oldest educational association in the western hemisphere. The Association has survived the test of time. Recently through the collective efforts of the KEA in Kessab, in the United Arab Emirates, in Beirut and in Los Angeles, a modern cultural center was built in Kessab, which also serves as a high school. It held its first commencement ceremony in 2009 with graduates attaining impressive marks in Syrian Baccalaureate.

Last year the Kessabtsis commemorated the 100th anniversary of the 1909 ransack and pogrom of Kessab. This year the Kessabtis around the globe celebrate the centennial of the Kessab Educational Association as a testament of their continued vitality and their zeal to overcome destruction through love of education and learning.

A performer of folklore Kessab songs. Kessab is an Armenian-populated town and surrounding villages in Northwestern Syria. The special dialect of the Kessabtsiz is somehow preserved up to these days, although the modern generation uses standard Western Armenian. Trtrian has preserved some of the traditional songs and has also written some of his own songs. He appears in weddings and other occasions. He is originally from Chakaljokh village.