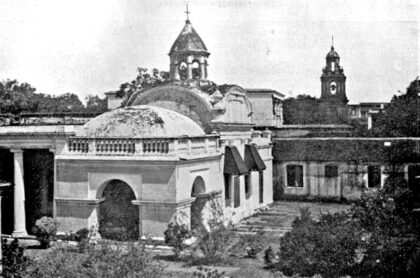 In an article appearing in the “DT NEXT” portal on 30 October 2022, under the title “Those were the days: White imprints on Black Town,” Indian journalist Venkatesh Ramakrishnan mentions the Armenians and their contribution to the city of Madras (now Chennai)

Here is the excerpt related to the Armenians:

“Armenia in Central Asia has always been a coveted place for invaders. Frequently, the Russians or the Turks would march in, causing an exodus of the elite.

Armenian merchants arrived in Madras by sea route (many from the Philippines) to trade in jute and silk, spices and precious stones.

The Armenian street in Black Town testifies to its prosperity and population numbers. One of them, Petros Uscan, other than building the Saidapet Marmalong Bridge and the stairs up the holy St Thomas Mount, willed his wealth to the city, showing an extrasensory perception of its glorious future.

Shahamir Shahamirian established the first Armenian printing press in India in the city of Madras in 1772, where the world’s first Armenian newspaper as well as the constitution of a future Armenian state was written.

The Armenian church remains a reminder of the glorious times the richest expat community had in Madras.”

End of the Excerpt.