(Azad-Hye Special: By Meri Martirosyan): On 12 July 2015, the Federation of Youth Clubs of Armenia (FYCA) organized the 2nd “Vardavar” International Festival in two outstanding locations in the province of Kotayk in Armenia: Garni and Geghard, with the participation of Armenians from Diaspora and foreigners from several countries.

The event of Vardavar (also known as “Water Pouring”) is marked by the Armenian Apostolic Church as the Transfiguration of Christ. It is one of the five major feasts in the church calendar, symbolizing Christ’s transfiguration in front of three apostles.

The event has a pagan background associated with the love story between Astghik, the goddess of love and beauty and Vahagn, the god of fire and war, both worshiped in ancient Armenia. According to the legends, Astghik spread love by gifting roses (“vard” in Armenian) and pouring water, while Vahagn protected that love with his mighty power.

The event started with a Holy Mass service in the Monastery of Geghard, followed by the water pouring activity, when young and old, were all involved in pouring abundant quantities of water into each other, in an atmosphere of extreme enthusiasm, a tradition that goes back thousands of years. It is a festival of love, purity and union. The water symbolizes the act of cleansing and being blessed.

In a press conference with the journalists, FYCA chairman Atom Mkhitaryan stated that the number of participants has remarkably increased, compared to the first version of the festival last year. He confirmed that the festival will be continued in the coming years. “I would like to see this festival as an activity in which Diaspora Armenians and tourists come and participate as a scheduled part of their visit to Armenia”, he mentioned.

The aim of this festival is not only getting people involved in the water pouring and accompanying dance and song activities, but also to communicate with the meanings of love and purity that it conveys.

Later in the afternoon, the activities continued in front of the historic temple of Garni, located ten kilometers away from the Monastery of Geghard.

Vice President of the National Assembly of Armenia Eduard Sharmazanov (in black shirt) plays at the water pouring festival of Vardavar with others. 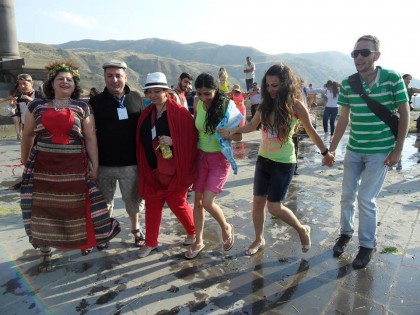 The Chairman of the Federation of Youth Clubs of Armenia Atom Mkhitaryan (second from left) dances with the journalists in front of Garni temple. Meri Martirosyan is second from right.