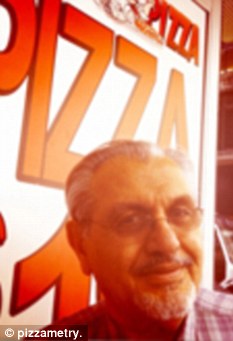 Hot, fresh pizza in your hands in 90 seconds: It's the pizza-pie vending machine!

Dominoes promise their pizzas will be ready and at your door in 30 minutes or less. But one New York entrepreneur found a way to deliver pizza to your hand in just 90 seconds – by creating a pizza vending machine.

The automated pizzeria delivers freshly baked hot pizzas at the touch of a few buttons, and not only that, but you can watch it be cooked right in front of your very eyes – just like a real pizzeria but without the chef.

Customers have the option of white, cheese or pepperoni pizza. Once they make their selection, they can watch as the machine presses a ball of fresh dough into an eight-inch pie.

The tomato sauce is then drizzled on to the pressed circle of dough and the grated cheese is distributed and spread by a plastic funnel as the pie rotates to ensure it is spread evenly.

The same funnel distributes the toppings.

The pizza takes anything from 90 seconds to three-and-a-half minutes to bake, depending how many are ordered, during which time customers can either watch the pizza-making process or can look at the 32-inch flat screen TV that blares entertainment and ads.

Once the pizza is ready, it is delivered in its own individual box with a disposable pizza cutter, napkin and two spices.

The vending machine itself holds enough fresh ingredients for 150 pizzas which are all kept in a sealed and refrigerated compartment.
Nothing is precooked, and no microwaves or water hook ups are used.

The New York Post reported that the man behind the ingenious creation is an immigrant from the Middle East who arrived in the U.S. virtually penniless. Puzant Khatchadourian then became a successful high-end jeweller who cast pieces for retailers like Movado, Harry Winston and Tiffanys. The company president is John Kavazanjian, retired CEO of a multinational. 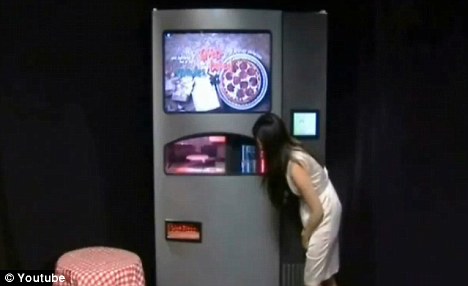 The machines are still in the process of building five machines for market testing.

Mr Khatchadourian has been working on the machines since the early nineties after hearing his son complain about how long it took the local pizza joint to deliver.

He has already spent millions of dollars building prototypes.

The pizza vending machine is only the latest in a long list of inventive machines that are popping up all over the world.

In France, a baker who grew tired of customers asking for baguettes after he had finished for the day invented a 24-hour baguette machine that bakes fresh loaves in minutes.

In Japan, which has the highest number of vending machines per capita, you can get almost anything your heart desires from their millions of? machines dotted all over the country, often times in the most unusual of places (there is even some on top of Mount Fuji).

From curry and rice, umbrellas, alcohol, school girl's (used) underwear, eggs, ice, live lobsters and even cars. Almost none of them are vandalised or non functional.

Newer PostSargis Hovhanisyan: Armenian children around the world should get to know one another and their homeland
Older PostHarvart: Poetry is written in the mind