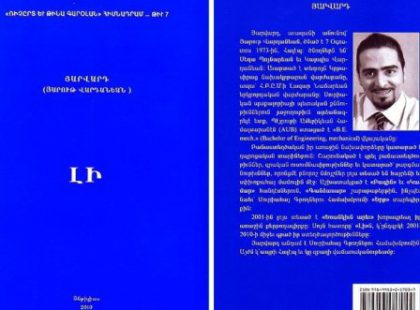 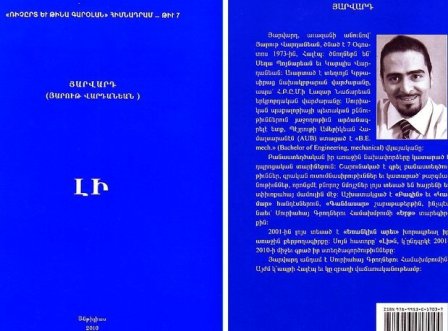 When my sister and I were little, my parents? inventive way to keep us entertained during the summer was to make us read one poem a day and memorize it.

We were reluctant at first and complained: ?But why??

Mum and dad retorted: ?Why not??

Poetry is a deal of joy and pain and wonder, with a dash of the dictionary.
Khalil Gibran

When I asked my scrabble-buddy Harout Vartanian to give me a few pointers about what to include in his biography, he was quiet for a few hours and then sent me some lines which ? after being put together ? struck me as a short story rather than a biography.

Harvart (pseudonym of Harout Vartanian; also, a normal Armenian male name and having nothing to do with Harvard University!) was born on 7-Aug-1973, in Aleppo, Syria. His mother: Seta Boynarian is a painter. His father: Garbis Vartanian: a businessperson and a well-known community figure. Harvart first attended Grtasiradz School followed by AGBU's L.N.C.G. Armenian Central High School.

For Harvart, words have always been his magic; he loves wordplay, and it is a non-stopping process taking place in his brain. He is under the charm of the beauty of his mother tongue and the enormity of language as an artistic tool.

He graduated from the AUB as a Bachelor of Engineering (mechanical) in 1996. He published his first collection of poems Yeranguen Arev (Triangle Sun) in 2001 with a generous fund from Caloust Gulbenkian Foundation. He was one of the members of a group of young poets who took part in a literary workshop in Kantsasar magazine?s office, under the supervision of poet Maroush. He is a member of the Syrian-Armenian Writer's Community and regularly partakes in its annual literary magazine Yert (Departure).

Recently, his second collection Lii (Filled up) was published in Antelias, Lebanon, having won the Richard and Tina Carolan Fund Award No. 7.

Harvart is an experimental poet who is never afraid of introducing fresh, avant-garde and daring works in the midst of a conservative-traditional literary hearth. At the same time, he has strong ties to classical-traditional Armenian literary legacy of poetry, to which he frequently pays tribute.

Scientific flavoring is inescapable in the works of an engineer/poet who has a love affair with mathematics.


His motto is never to cohere to a certain style, which is a style in itself.

He imposes his own world of fantasy on the real one as a means of escape to his own truth? as a way to externalize the eternal craving inside… as a means to leave a mark before the end of his days on planet earth.

A poet?s autobiography is his poetry. Anything else is just a footnote.
Yevgeny Yevtushenko

Interview with Harvart, a poet who ? as he likes to say ? purports to write poems:

They say that no one can become a poet but rather is born a poet. What do you think?

Beyond the shadow of a doubt there must be a certain God-given talent. But talent is just the tip of the iceberg; practice and educating your raw talent are what makes the blossom. Some poets are really talented but idle; others are hard-working yet have no talent. This latter kind have a boiling jealousy and an enormous craving to dress up like a real poet and take advantage of the benefits the title brings along. Poetry is not a profession, you do not have to prove it to others; rather they should appreciate it in you, giving you that title (which, after all, serves no purpose and feeds no stomach.) Poetry is unabashedly selfish in nature; perhaps, sometimes, it serves the community at large like when a poem becomes a national anthem lyric.

Being a poet, in the first place, is not desirable; it is rather a delicious maliciousness.

To be a poet is a condition, not a profession.
Robert Frost

If I asked you to give me numbers, what percentage of each of these make you a poet… Inspiration, the urge to express yourself and perseverance?

Though poetry is neither scientific territory nor quantitative, I think that the URGE for expression comes first; then, the lion?s share goes to PERSEVERENCE followed by INSPIRATION. Here I always like to mention Karl Lagerfeld, who, though being in a difference sphere of art: Fashion, has something universal to say about being creative as an artist: Keep working hard; because, in the midst of your work, inspiration may come and the two will give birth to a masterpiece. Actually, hard work may not pay since some will be just kitchen practice devoid of real inspiration. And, most importantly, if you feel like there is no inspiration and you are just doing it like carving coal in a mine, then, STOP immediately. A Poet also needs to change his surrounding from time to time, in other words, he needs to travel? to change the way furniture is arranged in his sleeping room? to go somewhere and listen to his thoughts in absolute loneliness and silence? what I want to stress on is that even in the presence of all the three mentioned in your question, you still need tranquility within as a human being (not an artist.)

A poem is never finished, only abandoned.
Paul Val?ry

Do you think you bested yourself with your second book? What?s different about the second one?

My first book: ?Yeranguen Arev? (?Triangle Sun?): is a debut work of a daring young poet on the flying trapeze (parallel to a William Saroyan title!) and was published in Aleppo, in 2001. Winning a publishing award, my second book came into being in Antelias, Lebanon, in 2011; the title: ?Lii? (Filled up.) It envelopes my works in the past 10 years and fills up my senses (parallel to lyrics by John Denver.)

Evolution has certainly played a role in silently sharpening my literary style to maturity, yet it has stolen away my youthful fiery adventurousness. I learned, along the way, to fiercely criticize my own work and to discard some or simply keep them in my literary drawer. Before, and as all beginners do, each work seemed to be a masterpiece worthy of celebration.

In my first book you can feel a spirit of experimentation along with really innovative and mature pieces of art. In the second book, I tend to be more in control in the process of selection. I revisit classical style with unique innovations and a modern breeze. There is more coherency-in-subject, more attention to detail and more understandable language. I know where I am heading to at last.

To answer your question: I am proud of my ?children.?  The second book also heralds a transition, a passage to prose (without betraying poetry: my first love.)

Poetry is the impish attempt to paint the color of the wind.
Maxwell Bodenheim

Who do you read? Who's you favorite classic and whom do you prefer from the contemporary poets?

Ardent reader: that?s what a wise poet should be; you cannot write what has already been written. You may start from where others left, and project your work into the future. On the other hand, too much reading or reading a favorite poet?s work for so long has the danger of losing your own voice or falling into the pit of captivating charm and gravitational influence, in stylistic terms. The scholastic program of mostly dead classical poets is poor; it is presented in a shallow and simplistic manner. You have to be dead to be appreciated and acknowledged in Armenian literature. Big names do not appeal to me. I would rather cite a few who have influenced me and helped me as mentors. Shahban is a personal favorite of mine. Zahrad is a giant. Maroush greatly helped in paving my way forward. Recently, Vehanoush TEKIAN is a great mentor of mine. Sona VAN, Henrig ETOYAN are precious poets from Armenia. Sometimes, individual works of relatively unknown poets strike the cord.

I am open to world poetry. I read poetry in Arabic, in English… I translated Whitman and Dickinson in ?Lii?. I like Muhammad ALMAGHOUT, a local flavor. Poetry is all about being a magnetic pole and having an ultra-strong personality reflected in your own work.

Is there a ritual for you to sit down and write? Is it difficult to go into that deep mental place in order to create?

This is a personal matter. For me, there is no Japanese Tea Ceremony to sit down and concentrate on writing. Actually, most of my work is written using my office keyboard (in a poor, dusty setting, with smell of metals) in a hectic working day, with constant intrusions by customers and telephone calls. Poetry is written in the mind, where it shines out so beautifully; the problem is how to transmit it down in letters. I wish I could write using a pen or pencil: that?s the real joy; but, computers have more conveniences; we are the new-age techno-poets. I am in constant touch with ?that deep mental place? each and every minute of my life. That source you are referring to is luckily under my disposition: a must for a true artist. I touch that place inside like touching the surface of sanctified water upon entering a church to pray. They gave Elton JOHN a book during a TV interview; he opened a random page, and? immediately put a tune to the words he just read? what about that?!

When a poem ends, it shouldn?t be finished; it must blossom and go on with us.
Zahrad (Zareh Yaldizciyan)

Who do you address in your poems? Do you have a certain reader in mind when you write them?

First and foremost, I write for my own very self. It?s not being crude; it?s the nature of poetry and literature. You must write to satisfy your own self, and then comes the needs of others, the audience. Of course, after all you are writing for somebody to read, otherwise why are we publishing our works? While being on cloud nine, you have to descend back and walk on the face of the earth. You may sacrifice a little bit to write having somebody in mind or upon request; I have learned that it is not the right path to follow, though it may have the benefit of becoming popular a little faster (but not necessarily wider.) Style also plays a big role, some write in simplicity because that is in their nature, some prefer dark and heavy poems to express themselves, the question is: Are you honest in your writing independent of style, or are you intentionally sacrificing your style in order to please an audience??

To have great poets, there must be great audiences too.
Walt Whitman

Had I asked Harvart ten more questions, he would have had something interesting to say in each sentence he uttered?

Well, maybe in his next book/interview!