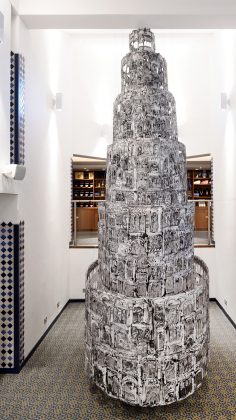 The beginning of human diversity is celebrated

While many people might view Babel Tower as a curse, Mourad decided to interpret this story as a blessing, because it marks the beginning of diversity and in turn allows for cultures to explore each others differences, generating intellectual and emotional wealth.

Born in 1970 in Qamishli, Syria, Mourad can be considered a double refugee, his family fled Turkey during the Armenian Genocide; before he then became a refugee himself again, leaving Syria, and now living in New York. Growing up in Aleppo, he has been exposed to different cultures, languages, histories and traditions.

At times, the marks made within his work (“Seeing Through Babel”) look like Arabic calligraphy, and then a moment later they appear as Roman column. You walk around the tower, however, are confronted with Armenian churches. And yet, despite their differences in origin, all of these elements appear on Mourad’s fabric tower with ease, as though they were always meant to have existed together.

More about the exhibition in an article in Harper Bazaar Arabia by Lizzy Vartanian Collier. 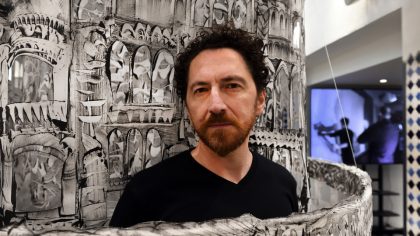