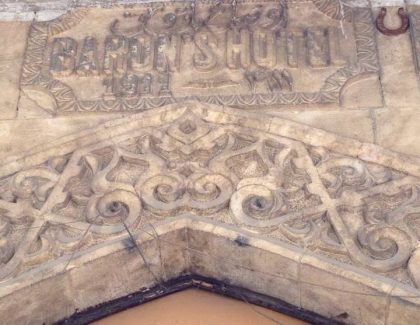 The name of Hotel Baron and the date of construction (1909) appear on the facade of the hotel. Photo by Saleh Zakkour (2017).

Hardly a year passes without Hotel Baron drawing the attention of journalists, tourists, and researchers.

In a recent article published by Reuters, Angus McDowall refers to the current situation of this hotel in an interview with the owner’s widow Roubina Tashjian.

The owner Armen Mazloumian (the descendant of the Mazloumian family, who constructed the hotel in 1909) died a year ago in 2016, after witnessing the worst part of the civil war in Syria.

Like anyone else, Tashjian considers the hotel as an important element in the modern Syrian history. Many personalities associated with it. Famous Egyptian nationalist leader Abdul Nasser has delivered his speech from the balcony of the hotel. Kings, princes, heads of states, visiting or passing through the region, stayed at the hotel, including the famous writer of murder books Agatha Christie.

Ordinary guests stopped coming to the hotel in 2012. Instead, the hotel hosted refugees from the devastated Eastern part of Aleppo.

Hotel Baron continues to allure visitors, but the recent photos, including those taken by Syrian researcher Saleh Zakkour (see below), show that it badly needs renovation.