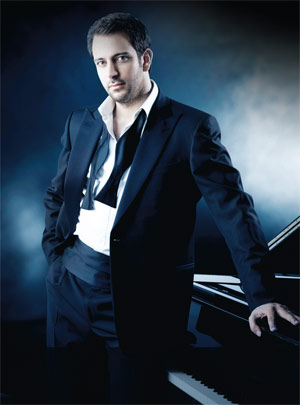 Karma Kaf? in Dubai welcomes Guy Manoukian and his band this weekend

CELEBRATED PIANIST/COMPOSER Guy Manoukian is coming to Dubai to play shows on Friday and Saturday night with his seven-piece backing band.

The Lebanese-Armenian performer has been invited to Karma Kaf?, Souk Al Bahar, by the venue?s resident DJ Ralph K (the man behind the famous chillout act REG Project).

City Times spoke with Guy, who released his latest album Assouman last year and has collaborated in the past with the likes of Wyclef Jean and Jamaican sensation Brukup.

What brings you to Karma Kaf? for your two-night stint?
I always love performing in Dubai, especially when I am working with my good friend Ralph K. Dubai has always been a springboard for my music and my career in general.

You have plenty of well-wishers on your Facebook fan page. How addicted are you to social networking?
I think Facebook, Twitter and the rest are really cool ? and they let my fans know directly where I will be performing.  I don?t spend a lot of time on them myself, because most of the time I?m travelling or preparing for a performance.

You?re producing the score for a musical in Singapore called Samsara, which is about the silk route. How?s the project coming along?
It?s great. Unfortunately I can?t talk about it at this point due to a confidentiality agreement, but it will happen in October.

What are your touring plans for the near future?
Well my tour started on the February 21 in Syria and will end in Qatar on March 20, before starting again in Egypt on April 2. I?m very excited to go out on the road, meet my fans and have a great time.

What was it like shooting the music video for Doe A Dear in Italy? What brought you to the location?
My record label EMI hooked me up with an upcoming director called Ivan Vanea. He had this great location in Varese, Italy, and I loved his experimental feel, so we went ahead with it. I hope you like the song and the video, which will start airing very soon.

You?ve spoken before about some big-name US collaborators for future projects. Can you divulge any names yet?
My experience with Wyclef Jean made me realise how self-fulfilling it is to collaborate with big names. Currently I am preparing a few collaborations with French and American artists.

And what about your next release post-Assouman?
I am preparing a new concept album called Orchid, which will hit the shelves on May 22 ? one day before my birthday!