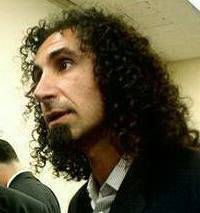 Interview made by RJ Eskow from The Huffington Post

'Screamers,' a documentary by Carla Garapedian, just won the Audience Award at the AFI Film Festival. It uses archival footage, interviews, and live music to reflect on the Armenian genocide, its aftermath, and the effect that later denials of the atrocity had on history.

It's a powerful document, both politically and artistically.The film centers around the highly popular Armenian-American rock band System of a Down and its lead singer, Serj Tankian, as they tour Europe and discuss the issues of , genocide, and human rights.

Last week RJ Eskow from The Huffington Post spoke with Serj about the film and his own political work. Serj co-founded Axis of Justice with Rage Against the Machine/Audioslave guitarist Tom Morello, to mobilize musicians and music fans around progressive issues.

Here are some excerpts from the conversation:

What politicized you? As an Armenian-American, was it your family's memories of the Armenian genocide?

It was the denial of genocide, more than the genocide itself, that politicized me. I was troubled by the idea that this kind of violence could occur, only to be ignored or covered up. It made me feel I had to act and react. There are so many things going on in the world today that are receiving the same treatment – including, but not limited to Darfur and .

In a way, the hypocrisy of the denial is more politicizing than the act itself. I think that the memory of 's genocide opened my eyes at an early age to the existence of political cynicism.

What's your definition of “genocide”? The diplomatic community has one, but does the word have a more personal meaning for you?

My thing is figuring out how to put things in a simple way, so here's my definition: If someone gets attacked because they look different, act different, or pray differently, that's genocide. And if the mass execution of a people is organized and perpetrated by a government, that's definitely genocide.

But anytime people are made to suffer as a group because they're different from others – to me, that's genocide too.

A lot of political leaders, even well-meaning ones, might say that forcing to acnowledge the Armenian genocide would limit our ability to fight terror or do other good things in the world. What would you say to someone who argues that the genocide took place almost a century ago, and that they'd rather concentrate on what we can do today?

Look: Correct recognition of the past affects the present. It's as simple as that. If we're at the point where we're going to use genocide as currency to get something we want from another nation … well, we're really fucked, aren't we?

Let me put it another way: You can't do the wrong thing for the right reason. It won't work. It never has.

The movie shows your efforts to get Denny Hastert to advance a resolution recognizing the Armenian genocide. The film's equally rough on the first Bush administration and 's over this issue. Do you think the resolution will do any better now that the Democrats control Congress?

You mean, are they real reformers or just “corporate Democrats”? We'll see. So far everybody's enjoying the general feeling of optimism, but Congress hasn't even convened yet. Nobody's really “in” over there right now.

Are you going to make any more efforts at getting recognition for ?

I haven?t made any plans personally. I?m not a lobbyist, I'm an activist. I?m working for the overall cause of genocide recognition.

Anybody who has ever tried to balance political work with artistic work of any kind has struggled with a sort of ?left brain/right brain? issue, balancing the primal and almost atavistic artistic impulse with the more rational act of political activism. How have you handled that balance in your own life and work?

My political work just comes to me ? whether it?s Axis of Justice, genocide recognition, or anything else. I don?t make plans, and I don?t weigh or balance art versus politics. I follow my instincts.

I follow my political impulses the same way I follow my artistic ones. Art is more right-brained, so the music is more intuitive. It may be personal or romantic or political or whatever.

It?s what you do after the intuition has been followed that?s more premeditated. Whether it?s me, Tom Morello, or anyone else involved with both music and politics, the key seems to be a simple one: Follow your heart.

The film shows a lot of System?s listeners responding strongly to the political message, although they don?t strike me as generally political people by nature. Why do you think that is?

Every time the truth is revealed in an intuitive way, people are receptive to it. If you affect their heart and show them the right place to be, that reaches the only thing that can change their minds: their hearts.

You got a lot of attention the day after 9/11 for posting an essay on your website that basically said, ?as heinous as this act was, there are historical reasons for it.? The attention you received wasn?t, shall we say, all that favorable. Those were ugly days – days when anything other than jingoism on the topic of terror brought down a lot of heat. How did that affect your ?political? side?

Oh, man ? I got nailed from every corner. I wrote about the demand for oil and its relationship to terror. I wasn?t even thinking. I was just reacting. Then came the reaction to my reaction – things like program directors dropping our single and Howard Stern completely dissing me.

I had to get on Howard?s show and try to explain my position, while trying to tour a week after September 11 and being vulnerable to every possible danger.

I remember our first show was in , and our band sat me down and said, ?You?re not a dumb person. why are you doing this?? I had to tell them, ?I don?t know. I don?t want you guys hurt, but also know that I can?t fucking help it. I really can?t. I can?t help saying what I feel is right.?

It can?t be controlled. When you see something wrong it?s about saying it, about having to say it. It?s about becoming the people called ?screamers,? where we got the movie?s title. These are people who start screaming once they realize the enormity of the horror, and can't stop.

I?ve never regretted it, but it?s difficult when it affects those around you ? it makes it painful. There?s a price to bear for speaking out at ?the wrong time.?

People said to me after the war in went so wrong, ?are you happy about post-9/11 and the ?Boom? video with Michael Moore and everything you predicted all coming true??

My reaction was always, ?Are you crazy? How can I be happy about tragic events like these? I wish I had been wrong. Completely wrong.?

Haven?t you been campaigning against Article 301 in , the censorship law under which Orhan Pamuk was arrested?

We?ve spoken out against it. It?s interesting. We have a great following in , despite our Armenian background. Journalists there tried to make us look racist toward Turks because of our campaign to recognize the genocide, but it hasn?t worked.

It?s interesting. We did an interview for Rolling Stone Turkey that never came out. Did they self-censor in order to stay out of trouble with the government? They asked me to take out my comments about the Armenian genocide, but I wouldn?t. It was supposed to come out in August. I wonder.

And how can you have people in jails for speaking their minds in a country that?s trying to become part of the European Union – a NATO ally? This law is wrong, just wrong.

Any advice for others, especially in the arts, who want to work on this issue? You work with other musicians on ?Axis of Justice.?

Well, the guy who wrote ?The Motorcycle Diaries? is doing a film on genocide, but it?s for me the cause is not just genocide ? it?s injustice. Whether it?s an economic embargo ? anytime people are suffering because of unjust actions, I just do what my heart tells me to do.

As for Axis ? we play it by ear. Tom?s involved with labor, domestic injustice, and economic issues. I?m more involved with embargoes, genocide, and international issues.

Something like that. But we also have a strong local chapter in LA, providing food for the homeless and other services. Our radio show?s been on for two years (details here).

What do you say when people complain about musicians and other celebrities who speak out about politics?

I agree with them, in a way. What do musicians know that other people don't? Nothing. Plumbers can speak. Electricians can speak. Everyone can speak. They should speak.

Lech Walesa was an electrician, and he became the leader of .

Exactly. Good for him. I don't want to spend all my time working as an activist. I don't get satisfaction out of it. I'd rather be doing something else. I'm a musician.

I've noticed something about people who say they don't like actors and musicians having political opinions, if you ask them who they think was the greatest President ever they always answer “Reagan.” And what was Reagan before he went into politics?

(laughs) Exactly. If anybody wants to speak up, they should speak up. I don't want to be a politician. I want others to start speaking out about genocide.

The interview is posted also at the website of the fans: http://soadfans.com/Article458.htm