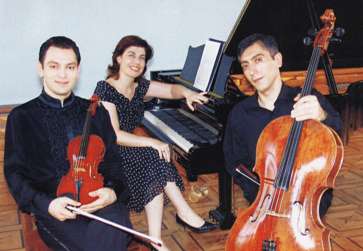 “Arsika” Trio founded in 1999, was renamed ?The Aram Khachaturian Trio? in 2008. This Internationally known Trio  has toured extensively throughout Armenia, Russia, Switzerland, Central and South America. It has also participated in a number of prestigious festivals, such as the Festival de las Artes (Costa Rica) and Festival International Cervantino (Mexico).

The Trio's live performances have frequently been broadcast on TV and Radio, giving great pleasure to tens of thousands of music lovers.

During the last 2 years members of the Trio have given master classes to the students of music schools in various regions of Armenia.

The Trio has worked very closely (and continues to do so) with contemporary composers. It has premiered a number of new works commissioned by the Trio itself. The members of the Trio are very well established and highly regarded chamber musicians. The Trio's repertoire covers a wide range of music styles.

Thanks to Mr. Vahe Hakobyan's support, in 2006-2008 the Trio performed numerous concerts and gave master-classes in Gyumri, Echmiadzin, Abovyan, Goris, Sisian, Cajaran, Armavir and other regions in Armenia.

In November 2007 the Trio?s concerts in Moscow and other Russian cities were a great success.

ARMINE GRIGORYAN (piano)
A graduate of the Tchaikovsky School of Music and Komitas Conservatory, Yerevan, Armenia, Armine did her postgraduate studies with Professors Georgy and Sergey Saradjian. Armine has had a number of appearances with The Armenian Philharmonic Orchestra, performing the piano concertos by Mozart, Beethoven and Brahms. As piano accompanist, she has won Special prizes at the Aram Khachaturian (1997) and Levon Chilingirian (2002) Competitions. Armine has played the Beethoven 10 Sonatas with renowned violinist Nikolay Madoyan.

She has toured Russia, Italy, UAE, Germany, Lithuania, Lebanon, Cyprus and the USA.

Armine Grigoryan is a laureate of '”Roma 2003″ Piano Competition. On this occasion she also received a Special prize and medal from the Chamber of Deputies of Rome. Armine?s performances have been released on CDs.

In 2005, for the first time in Armenia, Armine organized a festival dedicated to the Art of Accompaniment. As member of the jury, she has participated in many national and International competitions. Armine Grigoryan is a Professor at the Yerevan State Conservatory and since 2004 Director of the Aram Khachaturian Museum in Yerevan.

KAREN SHAHGALDYAN (violin)
A graduate of the Moscow Conservatory (class of Prof. Viktor Tretyakov), Karen completed his postgraduate studies with Prof. Maya Glezarova. He has attended master classes given by Y.Menuhin, V. Spivakov, G. Zhislin and Y. Chugayeva. From 1998-2002 he has performed with the famous “Moscow Virtuosi” under Vladimir Spivakov. In 2003-2004 and 2004-2005 seasons he appeared as soloist with various orchestras, playing on the Stradivarius violin given to him on loan by the Ministry of Culture of Russian Federation. Karen Shahgaldyan is a laureate of  the International Pablo Sarasate Competition (Spain). He is a scholarship holder from the  David Oistrach and Yuri Yankelevich Foundations, as well as Mstislav Rostropovich International Foundation. Karen has toured widely throughout the USA, Sweden, South Korea, Armenia and Russia.

KAREN KOCHARYAN (cello)
A graduate of the Tchaikovsky School of Music in Yerevan (class of Prof. A.Chaushian) and Komitas Conservatory (class of Prof. G. Talalian), Karen Kocharyan is a founding member and first solo cellist of the Armenian Chamber Players (ACP), associate concertmaster of the Armenian Philharmonic Orchestra and one of the founders of the Arsika Trio. He has toured with the Armenian Chamber Players and the Armenian Philharmonic Orchestra throughout Europe, featuring often as soloist. In 2005 Karen Kocharyan was the soloist, when Eduard Topchyan conducted the Pasadena Symphony Orchestra. He is a dedicated chamber musician. In 2006, together with pianist Armine Grigoryan and violinist Souren Hakhnazarian, he gave extensive concerts and master classes in 9 regions of Armenia. Karen Kocharyan is also a cellist with Aram Khachaturian String Quartet.