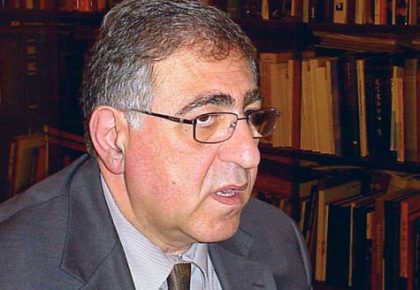 In a region plagued with conflict, the tiny nation continues to reach out in harmony.

Armenia, which changed hands throughout its long and troubled history, has learnt that maintaining a “balanced” relationship with all nations is essential to its survival.

On the ground, the smallest country in the region is in the heart of an area marked by conflict.

Its northern neighbours Russia and Georgia are in conflict, yet both have good relations with Yerevan.

To the south Armenia has a “pragmatic” relationship with Iran, which is listed as one of Armenia's best trade partners.

Yet Iran is in dispute with international community over its nuclear programme.

Both Armenia's eastern and western boundaries are closed because of border disputes with Azerbaijan and Turkey.

“We are a small [country], and we want to have good relations with our neighbours,” Armenian Deputy Foreign Minister, Arman Kirakossian said in the UAE recently.


“Keeping balance is number one priority for Armenia's foreign policy.

“Keeping that balance is not only from today but from ancient times? That is why we survived as a small nation.”

Today, Armenia, which was once under the rule of the Ottoman Empire, is eagerly awaiting the day its borders with Turkey will be opened.

Only then would Armenia start to think “larger and without boundaries”, Armenian officials said.

However, political problems needed to be overcome before normal relations with its powerful western neighbour could begin.

“Our desire to normalise relations [with Turkey] remains a candid one,” Armenian Deputy Prime Minister and Minister of Territorial Administration Armen Gevorgyan said.

Late last month, Yerevan announced the “temporary suspension” of the ratification of a peace accord with Turkey, in a move described by many analysts as a political tactic designed to put more pressure on Turkey to endorse the peace proposals.

Turkey responded by reinstating its commitment to the rapprochement process.

The two countries agreed late last year to establish diplomatic relations and to open their borders ? closed since 1993 when Armenia and Azerbaijan went to war over the enclave of Nagorno-Karabakh.

The Turkish-Armenian-signed protocols received the blessings of the US, Europe and Russia.

But they are yet to be endorsed by their respective parliaments.

Many Armenians, mainly in the diaspora, have asked for Turkish recognition of the killing of more than one million Armenians during First World War, calling it “genocide”.

But Turkey refuses to recognise the killings, saying the number has been exaggerated and those who were killed died in warfare.

Until today, calling the killings genocide has appeared to be a problem for other countries too, including the US.

Despite pressure from Armenian activists and lawmakers, US President Barack Obama described the mass killings in his statement to mark Armenian Remembrance Day on April 22, as “one of the worst atrocities of the 20th century”.

He stopped short of using the word “genocide”.


Turkey, a key US ally, has warned that it would badly damage the two countries' relationship if the US government tried to “politicise history”.

Turkey withdrew its ambassador to Washington earlier this year after the US House Foreign Affairs Committee passed a nonbinding resolution calling the killings “genocide”.

“I don't think someone is using this to pressure Turkey,” Kirakossian said.

However, some Arab analysts believe that the Western powers are using the Turkish-Armenia issue as a pressure tool against Ankara, especially after Turkey's positions vis-a-vis Arab-Israeli peace process were praised by many Arabs as “courageous and fair”.

But at the same time, Kirakossian expressed hope that the international community, including the US and the EU, could play a role in pushing the peace process between Turkey and Armenia forward, describing their role as “important”.

Asked whether Armenia had its eyes on financial compensation from Turkey at a later stage, Armenian parliamentary speaker Hovig Aprahamian said: “I believe this is not an issue to be discussed at the moment”.

Surely, better relation with Armenia increases the chances of Turkey being admitted to the European Union.

But it would equally benefit Armenia, since being open with Turkey would give the country access to Turkey's ports and larger markets.

Today, there are only chartered flights between Yerevan and the Turkish capital of Ankara.

Yerevan, which has not put any conditions on its ratification of the peace process with Turkey, has been blaming Ankara for putting obstacles in the way.

Turkey has denied this.

Armenia rejected the Turkish request to link the ratification of last year's protocols with finding a peaceful solution to the Nagorno-Karabakh issue, with Turkish ally Azerbaijan.

Aprahamian stressed that his country was seeking “peaceful solution to all problems in the region,” including with Turkey and Azerbaijan on the issue of Nagorno-Karabakh.

Armenia, he said, was “ready for compromise, which means concessions on both sides,” on the disputed enclave.

Until then, the open borders with Georgia to the North and Iran to the South would be some compensation to the closure of Armenia's West-East border closures with Turkey and Azerbaijan.

The survival of the 19-year-old independent Republic of Armenia, sandwiched between allies and rivals, hinges on adopting a delicately balanced foreign policy.

To its north, Georgia and Russia, which were locked in a military conflict in 2008, are important partners for Armenia.

Each accuses the other of starting the conflict, on August 7.

That day Georgia tried to retake control of South Ossetia following a series of clashes.

Russian forces quickly repelled the assault and pushed into Georgia.

But after five days of war, a ceasefire was reached, and the Russian troops pulled back, but maintain a military presence in both South Ossetia and Abkhazia.

The conflict left thousands of people from both sides displaced.

It also put a stop to shipments of natural gas from Russia to Armenia through Chechnya and then Georgia.

“More than 70 per cent of our transit goods go through Georgia's territories? It is a very important country [for Armenia], and we are with peaceful settlement to their problem and we also try to play the mediator because it is very important to open the routes between Georgia and Russia,” Kirakossian said.


While the former Soviet Union republic kept its strong bonds with Moscow ? a former foe of Washington ? Armenia has been receiving $1.8 billion in aid a year from the US since early 1993 according to Freedom Support Act.

Russia today has a military base in Armenia, and its troops are jointly patrolling the borders with both Iran and Turkey.

Washington's diplomatic mission in Yerevan, according to some Armenians, is significant ? a sign that considerable attention is being paid to the republic that had one of the first nuclear power plants of the Soviet Union era.

Armenia also has good relations with Iran in various fields including trade and tourism. But not in the nuclear field, Armenian officials stressed.

“There is no cooperation with Tehran in the nuclear field,” Armenian Energy Minister Armen Movsisyan said.

Even Kirakossian stressed, “Absolutely, there is no nuclear cooperation with Iran”.

“We have traditionally and always good and friendly, positive relations with Iran and I think no one could object to cooperation that is beneficial to the peoples [of two countries],” Gevorgyan said.

Iran had the right to develop nuclear power for peaceful purposes, as Armenia was doing, officials said in Yerevan.

But developing nuclear weapons was “unacceptable”, since the region was “fragile” and marked by conflict, officials said.

“We have interest in the settlement of this issue without further tension,” he said.

Western powers have accused Iran of planning to develop nuclear weapons and not cooperating with International Atomic Energy Agency (IAEA).

Tehran has denied the accusations and insists its programme is non-military.

Debate over Iran's nuclear programme, among other reasons, has led to a tension in the Arab-Iranian relations.

However Armenia's tendency towards good relations has been demonstrated in Arab countries in both the Gulf and the Middle East ? even Israel.

“We have diplomatic relations but Israel doesn't have an embassy in Armenia, the relations are in a very passive state. We have some cooperation in agriculture and health fields, but nothing else,” Kirakossian said.

Armenia's good relations across the region can be attributed to the country's diaspora.

“Arabs, first of all in Syria receive Armenians in Deir Al Zor who came from Ottoman Empire ruling in Turkey,” Kirakossian said in reference to the Armenians who arrived to Arab countries during and after the First World War.

Apart from Syria, Armenians lived in Lebanon, Jordan and Occupied Jerusalem and many moved to France, Canada and the US.