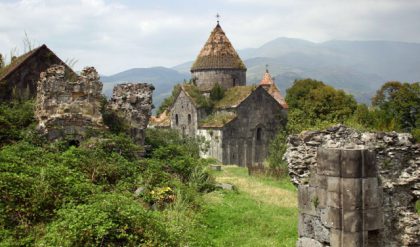 It has a tragic past but Douglas Rogers predicts a change in fortune for this fascinating country.

It was after the third glass of 50 per cent proof vintage Armenian brandy that my host for the evening, a garrulous Armenian-American property developer by the name of Vahak Hovnanian, suggested a game of golf. Usually, after a few glasses of top-shelf cognac, I'd be up for a round, but it was 9pm, we were in the basement of his mansion on a half-built residential village on the outskirts of Armenia's dusty capital Yerevan, and the chances of finding a floodlit golf course in the vicinity seemed pretty slim.

I shouldn't have been so sceptical. “We are the Jews of the Caucasus,” Vahak told me five minutes later as he smacked a drive straight down the fairway of his floodlit golf course, a short walk from his home. In the distance, the outline of Mount Ararat shimmered in the moonlight, while in a clubhouse decked out with leather chairs emblazoned with the Hovnanian family crest, a dozen members of his family cheered and ordered more brandy. On a barren field of rock and stone in central Armenia, a New Jersey property tycoon was building his own Jerusalem.

It is easy to see Armenia as the Israel of the Caucasus (even though it's actually the oldest Christian nation on earth, having adopted Christianity in AD 310, a decade before Rome). It is surrounded by Muslim countries on three sides – Turkey, Iran and Azerbaijan – and war-torn Georgia to its north. In 1915 Armenia suffered its own holocaust: the slaughter of 1.5 million people by the Turks, a genocide the Turkish government still refuses to acknowledge. From 1917 to 1991 Armenia was part of the Soviet Union, which protected it from the Turks but did little for its independence or devout Orthodox religious observance. Not for nothing is Armenia known as the land of “1,700 Years of Bad Luck”.

And yet, partly as a result of this tragic past, Armenia, more than any other country in the Caucasus, is now finding its feet fast. The Diaspora, descendents of those who escaped the genocide, now number three times the 2.5 million population of Armenia itself, and they not only dominate the country's fledgling tourist industry, but the wealthiest of them, men such as Vahak Hovnanian and Kirk Kirkorian, the owner of MGM studios in LA, invest US$1 billion a year in Armenia, funding everything from airports, roads and radio stations, to universities, museums and hotels.

It was because of one of these investors that I was in the country. Two months earlier, I had heard about an Armenian-American interior designer named James Tufenkian, a reclusive 40-something New Yorker who had made his fortune in the luxury Armenian handmade carpet industry. In 1995, four years after the end of Communist rule, Tufenkian had set up hand-weaving carpet factories in his ancestral homeland, reviving the ancient art of Oushak carpet making – finely textured, earth-toned Armenian rugs that had virtually disappeared during 75 years of Soviet rule.

Ten years on, Tufenkian not only had luxury showrooms in New York and Los Angeles, where his exquisite rugs were snapped up by the likes of Dennis Quaid, Donna Karan and Ben Stiller, but he had just branched out into the travel industry. Under a new company, Tufenkian Heritage, he had created Armenia's first design hotels: three properties set in restored ruins or close to religious sites that form a perfect cultural triangle for a visit to Armenia.

advertisementHistory hangs heavy in Yerevan. The starting point of any visit to Armenia, the one million-strong city lies in a dusty valley rimmed by rugged, rock-strewn hills that are more Arizona than Asia Minor. Its potholed streets and drab cement tower blocks were depressing reminders of the Soviet era, and even the spectacular view of snow-capped Mount Ararat, 30 miles distant, had a weightiness to it. It has been Turkish territory since 1915, a permanent, taunting reminder of the genocide.

Yet, sweep away the dust, and Yerevan, an eighth-century (B.C.) fortress town, reveals itself like a lost icon. On the wide expanse of Opera Square in the centre, opposite a new Marriott hotel, the National Opera House had been restored and the Yerevan Philharmonic was performing works by the great Armenian composer Aram Khachaturian.

Nearby, in what looked like a stone church, a handful of French-Armenian tourists queued up at the Parajanov Museum, a monument to the Armenian filmmaker Sergei Parajanov (1924-1990), whose work was banned by the Soviets but inspired Fellini, Antonioni and Godard. Pride in its artistic heritage runs deep in Armenia – almost as deep as memories of the past. Outside the museum I met Gilda, a painter from Paris.

My father fled Armenia in 1915 for Lebanon,” she said, almost in tears. “I grew up with so many stories of my country. It feels as if I am home.” She was 70 years old, spoke no Armenian and was here for the first time.

Tufenkian's Yerevan hotel, the Avan Villa, is the first ''boutique'' hotel in Armenia. A four-storey guesthouse set on a hillside overlooking the town, its 14 rooms were furnished with Armenian crafts and his carpets – all peach, ochre and walnut tones – warmed the living room. Typical of Oushak rugs, the colours reflected the dry hills around us.

There was nothing dry about the Villa's food. In a vine-covered courtyard we were served bountiful plates of crisp-thin lavash bread, succulent vine leaves stuffed with filet mignon, spicy ground lamb on bulgher, known as kufta, and bowls overflowing with fresh fruit. I wondered how such a dry place could yield such fresh produce and in answer the chef pointed to a narrow sliver of green at the foothills of Mount Ararat.

“The Ararat Valley,” he said. “The most fertile valley in all the Caucasus – where Noah planted the first grapes.” Perhaps it was grapes from Noah's vines that went into the delicious Armenian brandy we drank after dinner each night.

Tufenkian's newest hotel was the Avan Dzoraget, a 34-room lodge set in an old stone firehouse on a river in the remote Lori region, two hours north of Yerevan, near the Georgian border. We set off in a Tufenkian bus, the parched Yerevan landscape giving way to lush valleys and pine-covered mountains. It could have passed for Switzerland were it not for the shells of abandoned Soviet industrial plants by the roadside and the bemused looks of shepherds gazing at us from the hills.

The Dzoraget had only recently opened, it smelt of fresh cement, and there were no other guests, but there was no denying its splendid location: a white-water river gushed in front of it and the hotel bar was set in a Soviet-era bomb shelter located in a hill behind. It was too cold to raft the river, too early for brandy, so we drove half an hour to Sanahin, a revered 10th-century monastery set on a tree-covered hill top.

Armenia's countryside is a virtual museum of religious sites, many dating back as far as the fourth century and most neglected under Soviet rule. Some, like the spectacular Geghard Monastery set in a canyon west of Yerevan, have been well maintained, but Sanahin, the holiest site in northern Armenia, was a mess: grass grew on its roof, its frescos were fading and the vast root of a tree buckled its foundations.

“The head of this church was garrotted by an agent for the KGB in 1938,” said our guide, Heyk. So violent an act seemed unlikely in the sanctuary of these mountains.

Armenia is about the size of Belgium and its roads are surprisingly good. From Yerevan the following morning it took us only two hours to get to the third stop on the cultural triangle: Lake Sevan, north-east of the capital. At 6,230ft, one of the highest lakes in the world, Sevan was a popular resort for the Soviet elite, and when its silvery-blue water came into view, I could see a number of sturdy stone dachas on its banks, shaded by forests of red and yellow aspen.

Tufenkian had built his flagship hotel, the Avan Marak Tsapatagh, on the eastern side of the lake, near the Azerbaijan border. It was the most spectacular of all the hotels, a 34-room lodge in a converted stone barn set in a wheat field. I checked into a beautiful duplex room, the bare-stone walls covered with more lavish Oushak carpets. A balcony faced the lake. There would be something biblical about Armenia were it not for all the monasteries and Mount Ararat and for me, the most biblical sight of all was standing on the balcony watching the fishermen cast their nets from creaking row boats on the lake, while wizened shepherds herded flocks in the hills behind.

“Be a Shepherd for a Day,” is one of Tufenkian's Sevan tourism projects. He has contracted hundreds of Armenian farmers around the country to rear sheep to supply the semi-coarse wool that will be used for his carpets, and visitors can join them at work. We drove out to meet one such shepherd, a man so lined and aged he looked like a prophet. It was hard to believe the wool he harvested might one day make it into Ben Stiller's bedroom. Inevitably, his wife invited us in for more food: huge plates of grilled lamb with lavash and dried fruit: flattened sheets of apples, and dried plums and peaches clung together with string. A meal fit for the gods.

Whether Armenia moves beyond being a religious heritage destination and a nostalgic trip for the vast Diaspora, only time will tell. Ironically, its greatest chance of success in the wider tourism market might be in combination with trips to Turkey – the old enemy. If it continues to develop, though, it will be largely due to generous Diasporans such as James Tufenkian and Vahak Hovnanian.

It was on our last night in Yerevan that we were invited to Hovnanian's home after a chance meeting with his daughter, a glamorous Fifth Avenue princess, who had married an Armenian jazz musician and returned to the old country. Looking around the impressive mansion as the patriarch poured us that fine vintage brandy, a member of our group said that the house looked eerily familiar. “It's just like my aunt's home in New Jersey.” Turns out that's exactly what it was. Hovnanian, one of the wealthiest property developers in America, was building holiday homes in Armenia that were replicas of the homes he builds all over the US. Armenia might be the Israel of the Caucasus, but this little corner of it was all New Jersey.

Getting there (from the UK)
Sunvil Discovery (020 8758 4722; www.sunvil.co.uk) and Regent Holidays (0870 499 0911; www.regent-holidays.co.uk) are both experienced operators to Armenia and British Airways (0870 850 9850; www.ba.com) has regular flights to Yerevan. Regent offers a 10-day ?Classic Armenia? tour from ?1,345 per person or more general 13-day tour of the Caucasus? cities of Yerevan, Tbilisi and Baku. Prices include flights, b&b, transfers and incidentals except visa costs. Sunvil Discovery offers a set 10-day escorted ?Armenia and Nagorno-Karabagh? itinerary departing on September 7. The cost is ?1,627, including flights, half board, transfers and incidentals. Sunvil can also tailor-make individual trips based on this itinerary, but with numerous other possible excursions and options.

Further information
For more details on Tufenkian Heritage Hotels and Tours call 00374 1 520911 or visit www.tufenkian.com. The company does not have a UK office. The best guidebook is The Bradt Travel Guide: Armenia with Nagorno-Karabagh (?13.95). 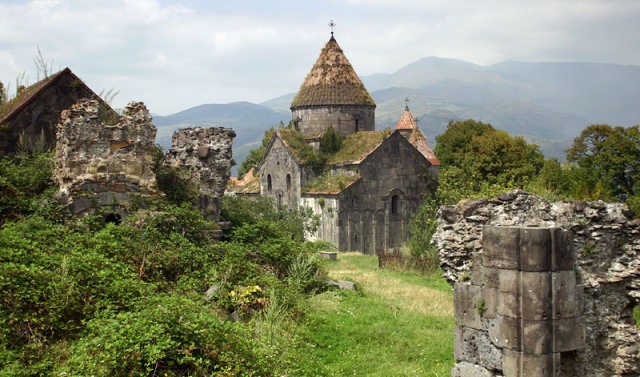