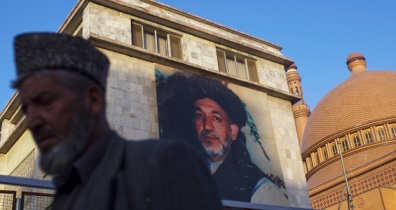 By Tanya Goudsouzian in Kabul

Ahmed Khan, an Afghan tribal leader, casually dismisses the upcoming national elections and the prospect of democracy for his country.

“What elections? All of this is a show. The people of Afghanistan have nothing to do with the process,” he says from a popular caf? in Dubai where he is currently on a business trip.

Khan, who heads a branch of a Pashtun tribe in Kandahar in southern Afghanistan, says he has received over the past two weeks several calls by presidential candidates soliciting his support.

However, he believes that his support is irrelevant in the grand scheme of things because he is convinced that the incumbent Hamid Karzai, the Afghan president will win a second term in the presidential elections, despite the emergence of a credible opposition.

“[Karzai] is America's man in Afghanistan. Why should they get rid of him?” he says.

“[The Americans] trust him and he is a good orator. They do not care what the Afghan people think.”

The Afghan presidential race began on June 16 with over 40 candidates vying for the top job.

Three were later disqualified (two for links with armed groups) and several withdrew in favour of one of the leading contenders.

According to opinion polls conducted by various local organisations, Karzai is expected to win the largest share of votes with Abdullah Abdullah, a former foreign minister, coming in second.

The election on August 20 comes in the midst of spiralling violence many blame on the Taliban and a large US offensive in southern Afghanistan.

Despite the violence, however, there is considerable discontent with Karzai's government.

“Back in 2004, everyone thought Karzai would win no matter what, but this year many people think he will lose,” says Ahmad Wali Massoud, a former Afghan ambassador to the UK and head of policy for the presidential campaign of ophthalmologist-cum-politician Abdullah.

“There is now prominent opposition.”

Karzai's opponents say the president has been ineffective and have tried to portray him as a 'puppet' of western powers and a schemer who will stop at nothing to maintain his grip on power.

They have accused him of using the government's resources to fund his campaign and tamper with the electoral process.

“We have repeatedly rejected these allegations, and if [his accusers] have any proof or if they have any problems, they are free to lodge their complaint with the Independent Election Commission,” he told Al Jazeera.

Massoud says resorting to the election commission is an exercise in futility because he believes Karzai appointed his allies to oversee it.

“The election commission claims that six provinces in the south of Afghanistan ? where there is Taliban, intimidation and a general dislike for voting ? have registered an equal number of voters as the 14 provinces in the north,” Massoud says, adding that such numbers cannot possibly be valid.

Ajmal Abidy, a 30-year-old campaigner for Ashraf Ghani, echoes these concerns: “The government of Afghanistan has been cited as the most corrupt in the world. And the most corrupt officials have joined Karzai's campaign.

“Karzai has signed a decree to release five convicted drug dealers to work for his campaign. For the people of Afghanistan, this is unacceptable.”

Siddiqi, however, dismisses the charges as politically motivated.

“These are baseless accusations. We cannot offer ministries to everyone. This government is based on national unity and the president has tried to bring in different tribes [throughout his tenure].”

Karzai's critics believe he is using desperate measures to maintain an edge over his political opponents.

In recent months, there have been allegations that Karzai has brought former leaders of armed groups ? once referred to as 'warlords' ? into his political campaign.

There are also fears among his opponents that Karzai, an ethnic Pashtun, has consolidated support across ethnic lines, even boosting his support base among Tajiks by nominating as his vice presidential running mate Mohammad Qasim Fahim, a former commander of the Northern Alliance.

“All the people whom he once called 'warlords', Karzai has now brought closer to his circle because he doesn't have the support of the people. By bringing powerful figures in, he thinks he can win the elections,” Massoud says.

But Nasrullah Stanikzai, a professor of law and political science at Kabul University, says Karzai's critics are being disingenuous.

He says Abdullah is also a member of Jamiat-e Islami Afghanistan, a group which counts “fundamentalist and extremist Muslims, and include warlords” among its members.

“Ghani was a member of the Karzai government during the transitional phase, and he worked with the so-called 'warlords' too. Why didn't he voice his concerns and objections at this time?”

But what some see as political gimmickry Siddiqi says is really an effort by the Karzai government to close ranks and reconcile differences.

“Since 2004, the elected government has made it clear that this country belongs to all people from different tribes and political parties so that there will be national unity in the country,” Siddiqi told Al Jazeera.

The two leading contenders are nevertheless banking on the facts that Afghans are ready for “hope and change”, themes borrowed from last year's US elections.

Abdullah is drawing heavily on his association with slain mujahideen leader Ahmed Shah Massoud, who remains an iconic anti-Soviet figurehead for the Tajiks of Afghanistan.

Abdullah also benefits from the exposure he received as Afghanistan's first post-Taliban foreign minister. He has said during his campaign that he wants to move the country to a parliamentary system ? a change he believes has become necessary.

Despite his support for the 'mujahideen credo', Abdullah has reached outside his traditional inner circle and brought two technocrats with no factional affiliations into his electoral ticket.

One is a Pashtun with a monarchist background and the other is a popular Hazara physician. According to one Afghan official, who spoke on condition of anonymity, this will be viewed positively by most Afghans who are eager to see less of a role played by names associated with “warlordism”.

Ghani, meanwhile, is depending on his successful tenure as Afghanistan's finance minister and World Bank development strategist. He has an adviser from the US for his campaign, and has devised a 10-year action plan for the country, touching on economic development, the creation of one million jobs, women's rights and poverty.

He has also said that if elected, he would deliver a handbook for Western combat troops' conduct and a road map for their eventual exit.

“We don't want to compare our campaign to Dr Abdullah's, but there is one fundamental difference,” Abidy says.

“Abdullah's campaign is paving the way for the return of the Taliban. It is based on organising and mobilising the people and organisations who were involved in the civil war [1990-1996] that led to the emergence of the Taliban, while Ashraf Ghani's campaign is presenting a practical working plan for Afghanistan,” Abidy added.

But Stanikzai says Abdullah's and Ghani's campaigns are likely to fail to deliver on their promises.

“If Abdullah's plan is to change the government to a parliamentary system, he will find this very difficult,” he told Al Jazeera.

“First, he would need to change the constitution, then hold a Loya Jirga (grand assembly) and finally, a referendum. This is not a simple affair. But before this, Afghanistan needs peace,” Stanikzai says.

“As for Ashraf Ghani's pledge to create one million jobs in five years, it is a very big challenge ? an impossible promise to the people of Afghanistan.”

On the eve of elections, most observers doubt that any of the candidates will be able to garner the required 51 per cent of votes to avoid a run-off at a later date.

“Whatever happens, it's all the same. Even the [leading two challengers to Karzai] were once members of this post-Taliban government. Whether they are part of Karzai's government or running against him, they are all part of the same group of people,” he said.

“This is about America's presence in Afghanistan and prolonging it for as long as it is necessary for them.”

Newer PostStatement of President of Armenia during the annual diplomatic gathering 2009
Older PostArmenians of Jordan: A community with duel identity