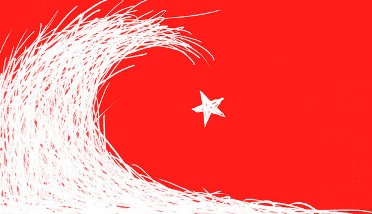 Like many of Asia?s antique cities, Istanbul is a palimpsest, continuously inscribed by new movements of people and ideas, even as older writings on its parchment remain faintly visible.

Few Istanbul neighborhoods manifest a multilayered identity as much as Kuzguncuk, which lies on the Asian shore of the Bosporus. Legend has it that Jews expelled from Spain in the late 15th century first settled here. Their neighbors were Greeks, Armenians and other Christians, part of the Ottoman Empire?s extraordinarily cosmopolitan mix of merchant and trading communities.

The local population is almost entirely Muslim now. Strolling through the neighborhood?s dappled streets one afternoon last week, I came across a synagogue and an Armenian Orthodox church. Both seemed permanently shut. The man who opened the door to the Greek Orthodox church only to wave us away had the sullenness of a minority under perpetual siege.

My companion remarked that the few remaining Greeks in Istanbul have little reason to be bon vivants. She is right. It has been nearly half a century since Istanbul lost the last of its non-Muslim minorities, driven out by a vengeful (and secular) Turkish nationalism. Rural migrants from the Black Sea region moved into the houses vacated by the Jews, Greeks and Armenians.

Ethnically cleansed Istanbul is now one of the port cities — Shanghai and Kochi, India are among the others — to be self- consciously, and profitably, recovering their multicultural past. Kuzguncuk, too, is being gentrified, helped by Istanbul?s creative class of architects, artists, journalists and designers, as well as visitors like myself, looking for a glimpse of old Istanbul in the neighborhood?s renovated Ottoman houses with overhanging wooden balconies.

Even as it frantically re-establishes its links with ?old? Europe, Istanbul demonstrates how a city?s exotic past can be enlisted into a high-end consumption of culture — without any sustained national reckoning with a painful history of pogroms and expulsions. Kuzguncuk itself reveals how Turkish identity today is being revised through careful negotiations and compromises with the past and present.

For all its gentrification by latte-sipping liberals, this old working-class neighborhood is still dominated by socially conservative middle-class Muslims, constituting a solid vote bank for the Justice and Development Party, or AKP, which just won a third consecutive national election by a landslide.

It would have seemed inconceivable to Turkey?s hard-line secular elites just two decades back that a devout Muslim like Recep Tayyip Erdogan, who comes from a hardscrabble background in Istanbul, would one day be Turkey?s most powerful leader since the nation?s founder, Mustafa Kemal Ataturk, and the spokesman for the country?s long-ignored and now upwardly mobile Muslims in the great Anatolian hinterland.

Erdogan has of course been helped by an economy that is growing at a pace rivaling those of India and China, enabling Istanbul to reinvent itself. And he has nimbly modified his economic policies since his early political days, when he was mentored by the former Prime Minister Necmettin Erbakan, a critic of global capitalism.

Still, as a comprehensive report in Bloomberg Businessweek pointed out, Erdogan has ?managed the delicate political trick? of pleasing Turkey?s business elites ?while still looking like a populist.? This is a rare feat, and perhaps the only other Muslim leader to have pulled it off was Malaysia?s authoritarian former Prime Minister Mahathir Mohamad.

Erdogan?s success has fueled much talk of Turkey providing an attractive model of political Islam, particularly to Arab countries stumbling out of harsh secular dictatorships. Indeed, Turkey?s influence in the Muslim world has not been greater since the early 20th century, when Muslims from India to Java looked up to the Ottoman sultan as caliph, hoping he would save them from European imperialists. Later, secularist post-colonial leaders such as Egypt?s Gamel Abdel Nasser, Shah Mohammad Reza Pahlavi of Iran and Pakistan?s Muhammad Ali Jinnah would try to build their nation-states on Ataturk?s model.

Today, Erdogan seems even more popular internationally than the sultan or Ataturk — and not just in the Arab street where he has become a folk hero for his loud criticism of Israel?s treatment of Palestinians. Last year, Anwar Ibrahim, a former deputy prime minister of Malaysia, told me that he had admiringly followed Erdogan?s political trajectory since his election as mayor of Istanbul in 1994. The leader of a Muslim youth organization in a prosperous little Javanese town said that modernizing Muslims like himself had observed the fortunes of the AKP very closely.

Ahmet Davutoglu, Turkey?s intellectually ambitious foreign minister, seems intent on vindicating the new Asian regard for his country. He has downgraded Turkey?s cold war alliance with the United States and devised a new foreign policy that aims at, in his phrase, ?zero problems? with such previously hostile neighbors as Syria, Iran, Iraq and Armenia.

These apparently major changes in Turkey?s internal and external politics have set off alarms in some corners of the West. Is Turkey moving away from decades of state-imposed secularism and geopolitical passivity? Is it likely to go the way of Iran? Will it incite and support other Islamic movements in the regions such as the Muslim Brotherhood?

Harvard historian Niall Ferguson, for instance, is convinced that the West ought to be deeply worried as Turkey creates ?a new Muslim empire in the Middle East.? After the AKP?s victory last month, Ferguson warned of Erdogan?s authoritarianism, denunciations of Israel and ?adroit maneuvers? to exploit the Arab Spring to his advantage. ?His ambition,? Ferguson wrote, ?is to return to the pre-Ataturk era, when Turkey was not only militantly Muslim but also a regional superpower.?

Ferguson can be excitable on the subject of Muslims — he once wrote that upon seeing the model for a proposed minaret at Oxford, ?the phrase that sprang to mind was indeed ?decline and fall. ?” But his view that Erdogan is planning to restore his country to its pre-Ataturk ?vigor? is hardly unique.

It is also hardly sensible. Far from being ?militantly Muslim,? the Ottoman Empire had a centuries-long history of tolerance toward minorities and drew on the diversity of its subjects. It was only in its final decades, eroded from within by nationalist minorities and battered without by European powers, that the empire adopted pan-Islamism as a last-ditch defense. Not surprisingly, Ataturk abolished the caliphate as soon as he came to power.

In addition Erdogan is not more — and is arguably much less — authoritarian than his predecessors from the military, who in the 1980s were the first to re-introduce Islam into public life in order to combat left-wing radicalism. On Israel, Erdogan is only amplifying longstanding popular disapproval. And far from being adroit, Erdogan, like most leaders, has struggled to respond coherently to the Arab Spring and now faces a potentially destabilizing situation in the flow of refugees to Turkey from Syria?s chaos.

Syria?s likely collapse into sectarian war may increase tensions between Turkey?s own Alawites and Sunnis, not to mention further complicate Ankara?s long and bloody conflict with Kurdish separatists.

There are many other problems lurking. The glamour of Istanbul can deceive, for much of Anatolia remains stuck in another century. Rapid economic growth, heavily dependent on short-term capital inflows, is not assured. Notwithstanding all its talk of ?turning east,? Turkey has arrived very late in the markets of India, China and Indonesia.

Having appeased business elites, Erdogan may find himself vulnerable if economic distress provokes populist anger among his other constituency, the aspirational middle class in Anatolia. Will he then try to reverse his journey from ideology to pragmatism? Or draw on the emotive force of Turkish nationalism, still more potent than Islam or so-called neo- Ottomanism in Turkey?

Much remains to be negotiated about Turkey?s identity. And there is much still to be inscribed on the palimpsest of Istanbul, whether or not Erdogan?s ambitious new plan to build two satellite cities outside the metropolis comes to fruition.

Turkey is no longer an insular country, and its fate will help determine many other national trajectories in a freshly globalized world. Once again, nearly a century after the Ottoman Empire gave way to Ataturk?s secular republicanism, Turkey?s political and economic reinvention engages millions of Muslims around the world. And there can be no narrower perspective on it than paranoia about Muslims and a long-defunct Ottoman Empire.

(Pankaj Mishra, the author of ?Temptations of the West: How to be Modern in India, Pakistan, Tibet and Beyond,? is a Bloomberg View columnist based in Mashobra, India. The opinions expressed are his own.)