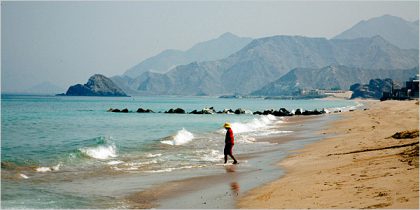 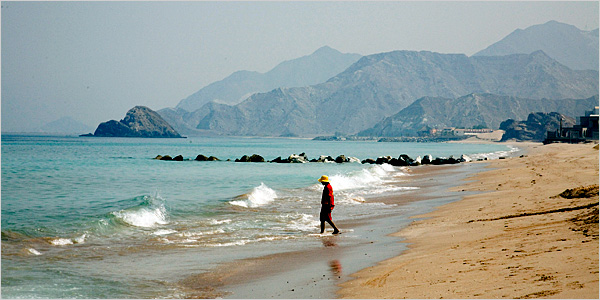 THESE days, you would have to live under a rock to not know about the glittery booming emirates of Dubai and Abu Dhabi. Artificial islands shaped like a map of the world, a second Louvre under way, the world?s tallest building under construction: the list of strange and superlative associations goes on and on.

But the United Arab Emirates ? made up of seven small federated sheikdoms ? is greater than the sum of its two superstars. Two of the lesser known emirates ? Ras al Khaymah and Umm al Qaywayn ? are still well off the international tourist trail. For now, Ras al Khaymah, on the border with Oman, is probably best known among local adventure travelers for its rugged excursions into the Hajar Mountains. Umm al Qaywayn, about an hour?s drive northeast of Dubai, is early in the process of revamping, Dubai-style, with plans for a $3.3 billion, 2,000-acre resort and residential marina.

The three other emirates ? Ajman, Fujayrah and Sharjah ? make for intriguing and very doable overnight visits or day-trips from frenzied Dubai and Abu Dhabi.

Sharjah is the most conservative of the seven emirates. For starters, it is completely dry ? unlike Dubai, it allows no liquor on hotel premises. There is also no smoking of sheeshas (hookahs), and public dress codes, particularly for women, are more strictly observed, though Western-style swimwear is acceptable on private beaches.

It is a good place to get a taste of the emirates? cultural history. And its private resorts, like the Radisson SAS (971-6-565-7777; www.sharjah.radissonsas.com; rates from 1,000 dirhams, or about $265 at 3.75 dirhams to the dollar) and the Coral Beach Club (971-6-522-9999; www.coral-international.com/beachresort; rates from 800 dirhams), are peaceful contrasts to the pounding techno and revelry in places like the Madinat Jumeirah in Dubai.

First settled during the Bronze Age, Sharjah is the cultural capital of the emirates. And there is no better place to see this than in the Heritage Area of Sharjah City. At the mouth of the Khaled Lagoon, the Heritage Area is juxtaposed against an emerging skyline of modern architecture. It is the site of Sharjah?s walled city, dating back some 200 years, and has been under restoration since the mid-1990?s.

For 15 dirhams, visitors can see all the sites in the complex, including al-Hisn (the Fort), built in 1820; the Maritime Museum, home to numerous artifacts and tools associated with the seaport?s long and bountiful tradition as a center for fishing and pearl diving; and the calligraphy museum, which showcases new and antique parchments, scrolls and finely etched and embossed ceramics.

The Islamic Museum is dedicated to Islamic beliefs, customs and history, with an array of exhibitions that include Mughal Empire armor, 10th-century Khorasan ceramics and coins from the first Islamic dynasty, the Umayyads. This museum is currently closed, but is scheduled to relocate in a new palatial facility nearby in December.

Farther up Corniche Road is the Arts Area, site of the Sharjah Art Museum, which claims to be the largest gallery in the Middle East. In addition to traveling exhibitions, the museum has a permanent collection of works by Orientalist painters like David Roberts, Ludwig Deutsch and Walter Tyndale.

The Sharjah Museum for Arabic Contemporary Art showcases artists like the Dubai-based photographer and video artist Mohammed Kazem and the feminist Syrian painter Sarah Ayoub Agha. Across the street, peek into the studio spaces and galleries dedicated to local artists and artisans around the inner courtyard of the Sharjah Art Institute.

Numerous other museums are spread around Sharjah City, including the Natural History Museum, the Sharjah Science Museum and Learning Center, the Arabian Wildlife Center and the Sharjah Archaeology Museum. (For more information contact the Sharjah Museums Department; 971-6-556-6002; www.sharjahmuseums.ae).

It?s not only the museums, however, that offer perspective on traditional culture. The souk in the Heritage Area is a bargain hunter?s delight of narrow, winding hallways and jutting wood-beam ceilings. Here, prices are negotiable, and you can find heaps of dusty antiques, pashminas and just about anything out of the ordinary ? from old scimitars to pearls harvested locally. For higher-end shopping, browse the Central Souk, a modern shopping center packed with more than 600 shops.

Sharjah?s low-key night life might not be for everyone, but that?s not to say there isn?t any. One of the biggest new attractions is the Qanat al-Qasba, a sort of miniature Venice southwest of the Historic Area, along al-Qasba canal. Once the sun softens (most places and people shut down from about 1 to 4 p.m. because of the heat), it?s the place to be for leisurely boat rides, evening promenades and good dining with abundant outdoor seating. Try places like Shababeek, a haute Lebanese restaurant where the staff dresses in black, and the d?cor is sleek and rich with dark woods and colorful silk pillows (971-6-554-0444; www.shababeek.ae); or the restaurant called 1.618, which serves a mix of moderately priced Mediterranean, French and American dishes (971-6-556-6577).

The border between Sharjah and Ajman is unmarked, but the differences are profound. If it weren?t for the women dressed in full-length black abayas on the beach, 100-square-mile Ajman, with its neon signs and kitschy, beachside architecture, would almost feel like a 1950s California beach town.

The smallest of the seven emirates, Ajman has a reputation for being the wildest, having earned the nickname Arabian Boozer. One reason is the Hole in the Wall, at the northeast end of Corniche Road, just across from the Kempinski Hotel. The origins of its name are obvious: it sells liquor through takeout windows. A poorly kept secret, it?s one of the few places like it in the sheikdoms, drawing people from all over the emirates seeking to stock up.

But Ajman isn?t just a place to stock up, it?s also a place to party. Its nexus lies at the Holiday Beach Club, a dense, oceanside complex of 16 nightclubs, bars and restaurants, all heaped on top of one another, just across the border from Sharjah.

Some of the places, like the Beach Bar, situated on an outdoor deck overlooking the sea, are open to everyone. But at most of the establishments, segregation by ethnicity is strictly enforced to prevent fighting, according to George Varghese, the assistant general manager of the Holiday Beach Club.

For example, there?s Outside Inn, an English-style pub where Westerners gather to watch sports on big-screen televisions; Gungaroo is for Pakistanis; Thamburoo, for South Indians; Aashiqana, for North Indians; Al Fanar, exclusively Arab (and a rarity in that it serves liquor); and Baywatch is a bigger, European-style discoth?que, three-quarters of which is reserved for Westerners, the rest for Ethiopians.

For accommodations, Ajman?s jewel is the 185-room Kempinski (971-6-714-5555; www.kempinski-ajman.com). Its private beach is easily among the most beautiful on the west coast, with clean white sand and the sort of unobstructed view of the Persian Gulf that is difficult to come by in Dubai. It also has an English-style pub, a bowling alley, an ayurvedic spa, a diving center and several restaurants and cafes.

Ajman?s peculiarly rough-and-tumble ambience isn?t likely to last long, as it hurries to develop more properties like the Kempinski, several already under way along the beachfront. Depending on your politics, this could mark a welcome change or the end of an era.

The Gulf of Oman side of the emirates presents a relaxed, idyllic alternative to the hustle-and-bustle of the Persian Gulf coast. Al Fujayrah is one place where travelers have begun heading in increasing numbers to explore the rich, natural splendor offered by this less developed region.

The hour-and-a-half drive east of Dubai takes you through the peaks and foothills of the Hajar Mountains, which run southeast from the tip of the Omani-controlled Musandam Peninsula at the mouth of the Persian Gulf and parallels the emirates? east coast. Clusters of roadside vendors flank the roads, dealing everything from ceramics and fresh fruit to rugs depicting iconic images of the emirates? ruling class.

Just on the other side, wedged between the mountains and the sea, lie some of the country?s most beautiful beaches, clearest waters and best spots for diving and snorkeling.

Opened in 2002, the 218-room Meridien al-Aqah Beach Resort (971-9-244-9000; www.starwoodhotels.com/lemeridien; rates from 950 dirhams) was the only true luxury property in the emirate outside Fujayrah city until recently. It is a great place for relaxing alongside the long gorgeous beach or around the giant free-form pool surrounded by impeccably manicured grounds. The clientele varies, making for interesting people-watching: from local women covered from head to toe and relaxing under poolside parasols to thong-clad pasty Russians sipping cocktails while a Filipino house band plays ?A Whiter Shade of Pale.?

But these days, there are several new arrivals: one is the 250-room Fujairah Rotana Resort & Spa (971-9-244-9888; www.rotana.com; rates from 850 dirhams), a Mediterranean-style beachside property just down the road from Le Meridien, with spare and crisp oceanview rooms and red tile roofing. Opened in May, the JAL Fujairah Resort & Spa (971-9-244-9700; www.jalfujairahresort.ae; rates from 700 dirhams) combines regional hospitality with sleek, Japanese-style d?cor and architecture and a beachside setting.

Each of the resorts arranges diving and snorkeling trips along the coast. Choices vary from several deep-sea shipwrecks for veterans to shallower coral reefs for snorkelers. Longer excursions are also available to the Musandam Peninsula, renowned for the unspoiled nature of its sheer cliffs, rocky coves and coral reefs.

If you?re planning a day trip, each hotel offers day passes to its beach and pools. Le Meridien offers beach and pool access, as well as an all-you-can-eat, multicuisine lunch buffet for 200 dirhams. At the JAL, it?s 100 dirhams on weekdays (that?s Saturday through Wednesday) and 150 dirhams on weekends (Thursday and Friday), and the Rotana offers day passes Sunday through Wednesday for 100 dirhams a person, or 150 dirhams a couple.

Recent round-trip air fares from New York to Dubai, for mid-November, were about $100 cheaper than flying into Sharjah (about $950). The cheapest flights generally had one stop, often in Atlanta, from which Delta offers service.

Photo: A lifeguard wades in the Gulf of Oman at Le Meridien al-Aqah Beach Resort in Fujayrah, a sheikdom often overshadowed by Abu Dhabi and Dubai. By Daryl Visscher for The New York Times