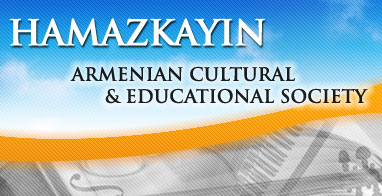 The 1920s marked the beginning of a significant political and cultural upheaval in the history of the Armenians.

The 1915-1923 genocide perpetrated by the Turkish Government, as well as the persecutions by the Soviet regime after the fall of the First Republic of Armenia in 1920, created major turmoil in the lives of the Armenian people. Survivors were dispersed all over the world, the Middle Eastern countries becoming the most significant region of refuge.

At this critical juncture, on May 28, 1928, a group of nine intellectuals, among them writer and educator Levon Shant, historian and critic Nigol Aghbalian, former foreign minister of the Republic of Armenia Dr. Hamo Ohanchanian, and stage director and art critic Kaspar Ipekian, founded the Hamazkayin Publishing and Cultural Society in Cairo, Egypt

The objective of Hamazkayin was to provide a sound education to the new generation, and to strive towards the preservation of the ethnic identity and cultural heritage of the Armenian people living outside their homeland.

Subsequently, Hamazkayin chapters were founded throughout the Middle East, Europe, the United States, Canada, South America, Australia, and most recently even in the Republic of Armenia.

Hamazkayin has been successful in establishing secondary and higher educational institutions which have prepared scholars, literary figures, and community leaders. It has also played a major role in the field of publishing, and for over seventy years, including thirty years in the United States, has contributed to the advancement of culture in general

Hamazkayin is a nonprofit organization, presently functioning under the official name of Hamazkayin Armenian Educational and Cultural Society.