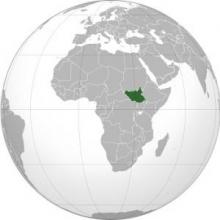 The birth of a nation in South Sudan raises new hopes in Armenia and Nagorno Karabakh that Azerbaijan will recognize the latter's independence.

Today, following East Timor and Kosovo, South Sudan became the world's newest nation, peacefully seceding from the North as a result of a referendum. Northern Sudan was one of the first countries to recognize the South's independence. Egypt and the United States have also recognized South Sudan's independence. President Obama said he is “proud” to officially recognize the newest county in the world.

Armenia is one of the smaller countries whose decision whether to recognize South Sudan will come with big implications. The country is supporting the independence-through-referendum of neighboring de facto Nagorno Karabakh Republic, which is hoping to be extended international recognition. It's primary hope is that it gets the same reception from from Azerbaijan.

Azerbaijan is quiet about South Sudan's independence. Recognizing its independence will send a strong signal that it is open to Nagorno Karabakh's quest for that status, while not doing so will put it at odds with the spirit of the international community. Especially when Northern Sudan has recognized the South's independence.

Azerbaijan has stood against Karabakh's independence and is involved in a decade-long negotiation process with neighboring Armenia about it. Armenia and the international mediators, led by the United States, Russia and France, support deciding Karabakh's final status by the people of the region through a “legally binding” referendum. Azerbaijan curbs it saying the referendum results can't lead to full independence and offers Karabakh high level of autonomy. Karabakh says it is the sole responsible entity of its destiny.

At the same time the international mediators are becoming more realistic in their approach. They are beginning to see Nagorno Karabakh as the third and equal party in talks between Armenia and Azerbaijan. President Obama in his June 24th message to the presidents of Armenia and Azerbaijan called on the two presidents saying now is the time to resolve this conflict and to offer “the people of Armenia, Azerbaijan, and Nagorno-Karabakh” a better future for themselves and for their children. Azerbaijan did not welcome the phrase “people of Nagorno-Karabakh” and boycotted the Kazan summit the next day by putting forward 10 new amendments to the document already on the table and ready to sign.