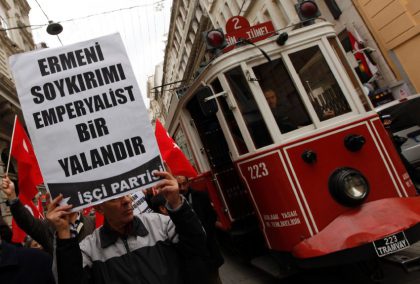 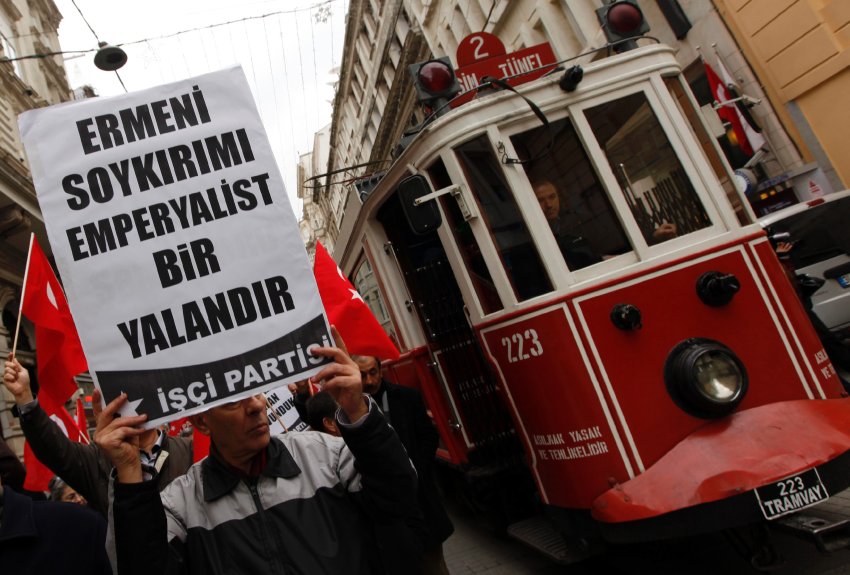 'There can be no talk of Genocide'

In a SPIEGEL interview, Turkish Prime Minister Recep Tayyip Erdogan, 56, discusses Ankara's relationship with the European Union, the debate over genocide against the Armenians and his role as a mediator in the dispute over Iran's nuclear policy.

SPIEGEL: Mr. Prime Minister, your country is currently giving a confusing impression. It is more modern and open than it was before you came into office, and yet it is also more pious and Islamic. Where are you taking Turkey: toward the West, toward Europe or toward the East?

Erdogan: Turkey has changed considerably and has been modernized in the last seven-and-a-half years. Unlike previous governments, we take the founder of the republic, (Mustafa Kemal) Atat?rk, at his word and are trying to bring the country to the level of contemporary civilization. In doing so, we look in all directions. We don't turn our face from the East when we look to the West. We see this as a process of normalization.

SPIEGEL: The first thing a visitor sees after passport control at the airport in Istanbul is an enormous display of the duty free shop's alcohol department and a poster advertising an exhibit of the revealing work of the late Picasso. In the Mediterranean city of Alanya, on the other hand, there are hotels with separate beaches for men and women, which would have been unthinkable a few years ago.

Erdogan: What you saw upon arrival at the airport is a nice expression of freedom. What you say about Alanya is something I hear for the first time. But even if it's true, it too is a manifestation of freedom. The owner of a hotel like that, and his guests, are exercising a right that we have to respect.

SPIEGEL: This week, you will host German Chancellor Angela Merkel, who doesn't want Turkey to join the European Union anytime soon. What will you say to her?

Erdogan: Turkey submitted its application for associate membership in the European Economic Community in 1959. That was 51 years ago. No other country was subjected to such a procedure, and yet we have remained patient. Nowadays, however, we are no longer a country that is merely seeking membership in the European Union. Instead, we are already negotiating for full membership. If proposals are submitted to us today that diverge from the agreed framework of these negotiations …

SPIEGEL: You are referring to the “privileged partnership,” which Chancellor Merkel prefers over full membership for Turkey.

Erdogan: … then this is just as strange as someone changing the penalty rule in the middle of a football match.

SPIEGEL: Your government is trying to shape Turkey into a new regional power. Why do you need Europe at all anymore?

Erdogan: It isn't about what we need, but about a mutual need. Turkey is not a burden for Europe. On the contrary, it takes a burden away from the EU. Together with Spain, we run the United Nations Alliance of Civilizations initiative against extremism, which benefits Europe. We have been a member of the customs union since 1996, and we satisfy the political criteria established in Copenhagen. In fact, we are even closer to fulfilling the economic Maastricht criteria than some EU member states. And then there is the fact that we are a founding member of the Organization for Economic Cooperation and Development (OECD) and have been a member of NATO since 1952. This makes us a bridge between the West and 1.4 billion Muslims.

SPIEGEL: Turkey has become very self-confident, and you are considered to be one of the most influential leaders the country has had since Atat?rk. Do you see yourself in the role of a “sultan,” as some supporters, but also critics, describe you?

Erdogan: I am the chairman of a major party that was founded by the people. Therefore, I would never compare myself with Atat?rk, the man who founded the republic. I have no intention of becoming a padishah, a ultan. It's enough for me when people say good things about me.

SPIEGEL: Why doesn't modern Turkey acknowledge the Ottoman Empire's genocide against the Armenians? The Foreign Affairs Committee of the United States House of Representatives has approved an Armenian Genocide resolution …

Erdogan: When a journalist uses the word genocide, he should take a careful look at the issue first. There can be no talk of genocide against the Armenians. Genocide is a legal term. In 2005, I wrote a letter to then-Armenian President Robert Kocharian, in which I told him that this is not a matter for politicians like us, but one that needs to be studied by historians. There are currently millions of documents on the subject in Turkish archives, of which more than 1 million have been examined since I wrote to Kocharian. If there are archives in your country, I wrote to him, then make them accessible. And if historians cannot clarify the subject sufficiently, then let lawyers, political scientists and archaeologists take part in the effort.

SPIEGEL: Armenians say that commissions of historians are just the best way to put off such disputes indefinitely. And we disagree with the notion that politicians should not talk about genocide. One person who has used this word is the current American president.

Erdogan: If he used the word, then he did so in error. A word doesn't become more correct because a president uses it. And besides, the United States is not a party to this matter. America, like other countries, is merely a bystander here. We and the Armenians are the only participants. This is our history. The Turkish Republic had not yet been founded in 1915. It was the era of the Ottoman Empire, which was allied with Germany at the time.

SPIEGEL: Isn't the republic the legal successor of the Ottoman Empire?

Erdogan: Turkey was undoubtedly founded on what was left of the Ottoman Empire. No nation can deny its ancestry. Anyone who denies his ancestry is committing a sin. If something serious comes to light after the historical examination of the past, we will be prepared to accept our history. But it's important that the Armenians are also willing to accept their history.

SPIEGEL: What history should the Armenians accept in this regard?

Erdogan: This was not a mass murder committed by one side against the other, but a battle, one that claimed the lives of Turks and Armenians, who were loyal citizens of the Ottoman Empire. However, some of them were later controlled by foreign powers and rose up in an insurrection. This has to be studied very carefully.

SPIEGEL: Why have you further inflamed an already difficult debate by mentioning the possibility of deporting all of Armenians working illegally in Turkey?

Erdogan: It saddens me that you see it this way. I talked about what we could do. For years, we have tolerated Armenians without residence permits. All I said was that this doesn't always have to be the case. The problem of illegal workers is discussed openly all over the world, but when someone in Turkey makes such a statement, people feel troubled. Why?

SPIEGEL: Why do you want to punish Armenians in Turkey for genocide resolutions adopted abroad — like the one in the United States and, most recently, in Sweden?

Erdogan: Who says that we hold Armenians responsible for this? I never said that. We began a process of rapprochement between Turkey and Armenia a year ago. We want to normalize our relations. And then the Foreign Affairs Committee in the US Congress, at the behest of the Armenian diaspora, suddenly adopts a resolution that describes the events of 1915 as genocide. This is not helpful. We turn to the Armenian diaspora and those countries that support the diaspora: There are Armenians in Turkey who are Turkish citizens, and there are those who live in our country illegally. So far, we have not considered the question of deportation, but if the diaspora continues to exert pressure, we could imagine ourselves capable of doing that.

SPIEGEL: You refuse to accept the term genocide, and yet you yourself use it frequently. For example, you accuse Israel of genocide in the Gaza Strip. On the other hand, you defend Sudanese President Omar al-Bashir by saying that a Muslim cannot commit genocide. Are Muslims somehow better people than Jews or Christians?

Erdogan: You take my words completely out of context. I'm not walking into that trap. I said that, to a certain extent, one could describe the events in Gaza as genocide: 1,400 people died there, many of them killed by phosphorus ammunition, more than 5,000 people were wounded and 5,000 families became homeless.

SPIEGEL: And what about Sudan?

Erdogan: In that case, I was talking about a principle. I am a Muslim. But I have never compared my religion with other religions. I said that a Muslim could not commit genocide the way the United Nations defines it. Islam is a religion of peace. Muslims believe that someone who kills an innocent person behaves as if he were killing all of humanity.

SPIEGEL: Turkey is currently a non-permanent member of the UN Security Council. It is also under consideration to be the country through which an exchange of uranium enriched in Iran could take place. Will you support sanctions against Tehran? The International Atomic Energy Agency (IAEA), has doubts about the peaceful nature of the nuclear program.

Erdogan: That's wrong. The IAEA never made that conclusion.

SPIEGEL: In its latest report, it clearly stated that Tehran has not cooperated sufficiently to rule out non-peaceful use.

Erdogan: I take a different view. Iran offered to transport its enriched uranium to another country, and the Iranians wanted nuclear fuel in return. The question, now, is where this exchange is to take place. Former IAEA Director Mohammed ElBaradei proposed Turkey. The Americans were opposed to it at first, but then they agreed. Now we are waiting for an answer from Iran. Iran seemed to be considering this possibility, but then the connection was cut off.

SPIEGEL: If Iran refuses, will you support sanctions?

Erdogan: First we have to try to find a diplomatic solution for the problem. Sanctions have been imposed against Iran several times, but what's the result? Aren't any American or German goods reaching Iran now? They are, indirectly. Of course there is Mercedes in Iran. And Peugeot, too. I like to speak openly. I hate hiding things in politics. What we need is diplomacy, diplomacy, diplomacy. Anything else will do nothing but threaten global peace. And don't those who are exerting pressure have nuclear bombs of their own? Turkey isn't a nuclear power, but there is one country in this region that does have nuclear weapons.

SPIEGEL: Have you made this just as clear to Iranian President Mahmoud Ahmadinejad?

Erdogan: Of course. I speak as openly with him as I do with you. We don't want any nuclear weapons in this region.

SPIEGEL: Mr. Prime Minister, thank you for this interview.

Photo: A Worker's Party supporter in Istanbul holds up a sign that reads: “Armenian genocide is an imperialistic lie” during a protest near the Swedish consulate on March 12. After the Swedish parliament passed similar legislation, Turkey temporarily withdrew its ambassador from the country.