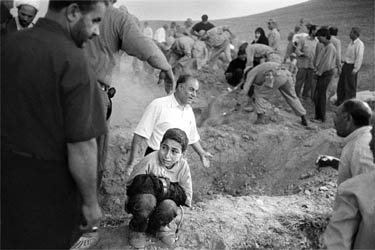 The International Jury of the 46th Annual World Press Photo Contest selected the photograph to the left, shot by Polaris Images photographer, Eric Grigorian, for this year's top honor.

Surrounded by soldiers and villagers digging graves for victims of that morning's earthquake, a young boy clings on to his dead father's pants as he squats by the freshly dug grave where his father is about to be buried.

That morning a 6.0 magnitude earthquake struck the Ghazvin Province of Iran 300 miles from the capital Tehran. Dozens of villages were completely destroyed killing hundreds and devastating the lives of thousands of Iranians. This series of photos are from the village of Changooreh the day of the earthquake and also the day after. Approximately one hundred villagers died in this one village.

Eric Grigorian is an Armenian photographer living in Los Angeles. He was born in Tehran, Iran in 1969 and moved with his family to the United States in 1979 during the start of the Iranian revolution.

Eric received his photojournalism degree from San Jose State University under Jim McNay and in 1998 completed his last semester of college studying under Ed Kashi in london in the Syracuse Universities abroad study program as part of a scholarship he received from the Alexia Foundation for World Peace.

Upon graduation Eric freelanced for the Los Angeles Daily News. After three years of working with the Daily News Eric went to freelance for magazines and recently joined Polaris Images (www.PolarisImages.com).

World Press Picture of the Year 2002 by Eric Grigorian
http://www.polarisimages.com/Eric_Grigorian/Award_page.html