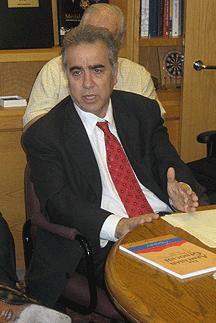 Harut Sassounian is the publisher of The California Courier, a weekly newspaper based in Glendale, Calif. He is the president of the United Armenian Fund, a coalition of the seven largest Armenian-American organizations, and senior vice-president of Kirk Kerkorian's Lincy Foundation.

From 1978-82, he worked for the Procter & Gamble Company in Geneva, Switzerland as an international marketing executive.

For 10 years, he served as a non-governmental delegate on human rights at the United Nations, playing a leading role in the recognition of the Armenian Genocide by the UN in 1985. He has a master's degree in international affairs from Columbia University and an MBA from Pepperdine University.

He is the author of The Armenian Genocide: The World Speaks Out, 1915-2005, Documents and Declarations, which was published in English and Arabic.

He has been decorated by the president and prime minister of the Republic of Armenia, and the heads of the Armenian Apostolic and Catholic churches.

He is also the recipient of the Ellis Island Medal of Honor.