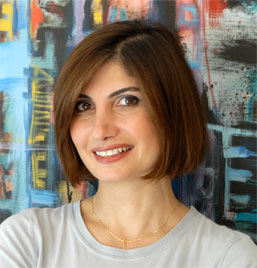 Born in 1972 in Beirut, Lebanon, Manuella Guiragossian is the youngest daughter of famous artist Paul Guiragossian. In 1989 Manuella traveled to Paris with her father for his exhibition at UNESCO. Conflict broke out in Beirut and they were forced to live in Paris. During this time she developed 13 character designs named “Les Archifous” for a children's play based on the creations of Lebanese author Michel Khattar. An exhibition and a play of these characters were held in “La Defense” in Paris. The success of the exhibition meant that “Les Archifous” were exhibited at the Festival de Bandes Dessinées in the French Cultural Center of Beirut in 1991.

She fulfilled one of her long term ambitions in the summer of 1997 when she moved to California and enrolled into the California Institute of the Arts. “Mythes & Légendes”, was her highly celebrated first solo show at Emmagoss Art Gallery in 2000. The work covered mythology and legends from the ancient Phoenician, Greek and Egyptian civilizations. In between shows, Manuella created 4 animated films. She moved to the Middle East in 2003 and is currently working to produce her father's biography in words and vision.

Her more recent work, acrylic on canvas and paper is greatly inspired by her childhood, her travels and the cities where she lived such as Beirut, Dubai and Los Angeles.