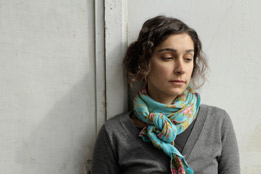 Tamara Stepanyan was born in Armenia. During the breakdown of the Soviet Union, she moved to Lebanon with her parents in 1994, at a time when the country was coming out of the Civil War, and has been working and residing in Lebanon since.

She graduated in Communication Arts with an emphasis on Radio/TV/Film from the Lebanese American University (LAU) in 2005.

Stepanyan made a number of films while in university including The Needle (2004) and The Last Station (2005), and participated in film workshops in Armenia, South Korea and Denmark.

Her works include “My Beirut”, a video/photo/audio installation that was part of Badguer I in 2009, and recently “Little Stones”, a documentary shot in Denmark in 2010 that was shown in Nee a Beyrouth, in The Cinema Days of Beirut and in CPH DOX in Denmark.

Tamara Stepanyan: Director of “Little Stones” and other movies