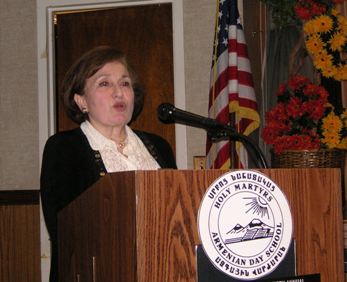 Mrs. Zarminé Boghosian is a devoted member of New York- New Jersey Metropolitan area community. She moved to USA from Aleppo in 1978 with her husband Missak and two sons Ara & Garen.

Boghosian's first love is education. However her leadership skills encompass Education, Literature and Arts.  She served The Holy Martyrs Armenian Day School of Bayside, NY 14 years (Sept.1987 -2001).  After five years of semi- retirement she was invited to return and continue her role as the HMADS Principal.

Boghosian besides teaching serves her community on the East Coast in various capacities as a guest speaker, program coordinator, prepares programs for the Armenian Radio of New Jersey, serves as a member of various cultural committees and an MC for special events.

Boghosian is respected for her charismatic leadership, for her dignity, confidence, intelligence and good humor, She knows very well how to balance intellectual rigor with warmth and compassion.

Boghosian was awarded for her services as an 'Educator par Excellence' on many occasions.

To name a few:
Primate's Renaissance Medal
June 2000
In recognition of selfless devotion in the field of Education for more than One-decade -Received from His Eminence Archbishop Khajag Barsamian, Primate of Diocese of the Armenian Church of Eastern North America

Citation of Honor
March 2000
Presented by Honorable Claire Shulman, President of the Borough of Queens In grateful recognition of outstanding work in the field of education and for providing excellence in
education, pride in the Armenian heritage, and strong community values. (Same day among the distinguished recipients was Dr. Raymond Damadian, Inventor of MRI)