Over 20,000 people voted in this year's BBC's Audience Award, selecting the Armenian Navy Band as their favourite performer of the year.

is a nation that invokes many descriptions: landlocked, ancient, nestled in the foothills of the and bearer of many tragic events. Yet is also celebrated for its music, especially the duduk, a flute carved from apricot wood with a cane reed whose range is barely one octave. When played by a master such as Djivan Gasparyan the duduk creates one of the loneliest, most moving sounds ever heard.

Yet is not land locked in the past; instead, it has maintained a connection with Western thought and culture – this has been helped by a huge Armenian diaspora, many of whom live in the – and The Armenian Navy Band are the most brilliant example yet of how an ancient culture can comfortably blend with a contemporary one.

The Armenian Navy Band was founded by the percussionist/vocalist of Armenian descent, Arto Tun?boyaciyan. Arto likes to describe The Armenian Navy Band as “avant garde music from which suggests something of the band but is a little limiting. The band have a strong jazz influence and to this they bring in all manner of folkloric instrumentation so building an organic creation that, well, swings.

Along with others of the Armenian diaspora, Arto Tuncboyaciyan grew up on the outskirts of . Arto turned to music to celebrate his culture and here he managed to keep alive the spirit of . The sorrow and loneliness, also to be found in African-American jazz and blues, are mixed here with the melancholy Armenian spirit. Yet there is also joy, love and solace.

The Navy Band is composed of twelve Armenian musicians and the compositions are all Arto originals which – using his words – “have the sound of my life“. The instruments vary from traditional: duduk, zurna, kemanche, kanun to contemporary: trombone, alto sax, tenor, soprano sax, trumpet, bass, drums, keyboard and piano. The Armenian Navy Band have released 3 CDs: 1999's Bzdik Zinvor, 2001's New Apricot and 2004's Natural Seed.

“I don't give direction to anybody,” says Arto. “I let you imagine for yourself but what I try to give you is Love, Respect, Truth. I believe this is the path for trust. Trust is one of the simplest forms of wealth in this world. This is what we need.”?

More about the band

The Armenian Navy Band was formed in 1988 in . The founder Arto Tuncboyaciyan was born in 1957 in from a family of Armenian descent. At the age of 11 he started his musical carrier with his brother Onno. In 1981 Arto moved to .

The band?s first European tour in February / March 2000 was successfully received in , , and .

Their next tour, later that year, included , , Bruxelles and , ending with a stop in for the recording of the album “New Apricot”under the Turkish label “Imaj M?zik”. 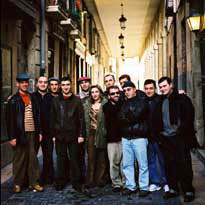 The members of the band are:

Official Web Site of the Band: