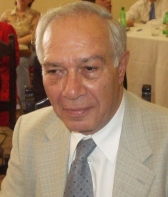 AZAD-HYE (): In April 1997, on his way to the Far East, Aram I Catholicos of Cilicia, visited the Armenians of the and laid the foundation of the Saint Gregory the Illuminator (Sourp Krikor Lousavorich) Church in Sharjah.

At that time Bedros Aslanian was member of the ?Central Committee for the Construction of the ? and served as one of the 16 Godfathers of the newly built Church. He was also a major donor, including funding the construction of the baptistery inside the Church. In November 1998 the Church was ready for the first Holy Mass.

Before getting involved with the construction of the Church, Bedros Aslanian, an Ethiopian-Armenian based in the UAE for more than three decades, has been an active member since the very beginning of the UAE Armenian Community?s organized life. In 1980 he was appointed as Chairman of the National Administration (Azkayin Varchoutyoun) of Sharjah and the Northern Emirates, a position that he kept until 1994.

In December 1994 the first elections of the newly formed Prelacy of the Armenians of Kuwait and the Gulf Region took place in , Sharjah and simultaneously. Bedros Aslanian was elected to the 5-member body in Sharjah and subsequently was appointed as Vice-Chairman for a period of two years (1994-1996).

During that time Karekin II, Catholicos of Cilicia visited the UAE and had a round of meetings with high ranking personalities in the country, including the late President Sheikh Zayed Bin Sultan Al Nahyan, Crown Prince of Dubai Sheikh Mohammad Bin Rashed Al Maktoum and the Ruler of Sharjah Dr. Sheikh Sultan Bin Mohammad Al Qasimi. The later donated a piece of land in Sharjah?s Yarmouk area for the construction of the Armenian Church.

As Vice-Chairman, Bedros Aslanian was instrumental, together with his colleagues (Chairman Varoujan Narguizian, Haigaz Tahmazian, Hrayr Soghomonian and Neshan Basmadjian) in preparing for the above critical meetings that had immense importance for the future of the Armenians in the UAE.

As appreciation for his efforts he was bestowed with the coveted ?Cilician Knight? (Asbed) medal.

In 19th October 2005, during a special ceremony that took place in Etchmiadzin, Karekin II, Catholicos of All Armenians, awarded Bedros Aslanian with “Saint Nerses the Gracious” (Sourp Nerses Shnorhali) medal, one of the highest medals of the , as acknowledgment for his services to the Armenian Church and Nation. On this occasion the Catholicos of All Armenians mentioned that the service of Aslanian to will never be forgotten.

Combining the gratitude and the medals of both Armenian Catholicosal Sees (All Armenians See in , and the Cilician See in )  Bedros Aslanian has become a symbol of reunion. He continues to serve his Community.

His son Sebouh Aslanian who is Political Sciences graduate from the , contributes his articles (including those devoted to the Armenian subjects) to reputed international publications.

On private business level he and his wife Rita are the founders of ?Technochem Services Establishment?, a family business since 1978, based in Sharjah. With Aslanian's extensive knowledge in the printing industry, the company?s product line grew to printing inks, press chemicals, printing machinery and all other auxiliaries concerned with the printing industry, covering the whole Gulf market, with branch offices in and .

Photo: Bedros Aslanian participates in the 2nd Armenia-Diaspora Conference in Yerevan 2002, as part of the UAE delegation.