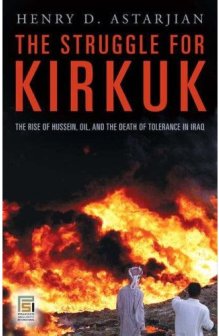 “The Struggle for Kirkuk: The Rise of Hussein, Oil, and the Death of Tolerance in Iraq”

Book description by Amazon.com:
Seldom in history has a nation engaged in war without knowing the enemy, as the United States has in Iraq.

This book explores, through real life stories, the social and political dynamics at play in Iraq and Iraqi Kurdistan before the rise of Saddam Hussein.

Kirkuk is a hotly contested oil city — a time bomb with the potential to shatter the fragile hope for unity in Iraq.

In this book-half memoir, half-history, Iraqi-American physician Henry Astarjian reveals the turmoil of life under Communism then as a political prisoner in a death row cell in Iraq and a military prison in Baghdad.

Told from an eyewitness perspective, his book gives the history of Iraq through the life of one of its most volatile towns, through the eyes of a citizen who witnessed death, kidnapping, corruption, political indoctrination, and open murder in the streets.

Originally a Jewish enclave, Kirkuk was home to Jews, Kurds, Armenians, Turks, and Communists — diverse peoples whose uncommon experiences contributed to the broader political tensions of the 1958 Revolution that brought Saddam Hussein to power.

This book is the story of the demographic diversity of this city, its political currents leading to the demise of the Royal regime of Iraq. It is the story of colonial Britains, Kurds, Turkomans, Assyrians, pre-emigration Jews, and post-genocidal Armenians, all living together in peace but with deep-seated animosities.

Directly or indirectly they all were involved in surreptitious battles for control over Baba Gurgur, the oil fields of Kirkuk.

Henry Astarjian was both a witness to and a victim of most events of this period.

The book also explores the influences that the British, through the Iraq Petroleum Company (IPC), had in shaping Iraqi society. This book goes beyond the obvious in detailing the Soviet attempts to gain access to Baba Gurgur through its surrogates, the Communists, and their efforts to recruit the budding youth. It also tells the story of the author's incarceration and torture in a death row cell, at the hands of his childhood friend Adnaan Al-Azzawi, an avowed Communist.

The demise of the Hashimite Dynasty in Iraq in 1958, which led to Communist takeover of the country, touched Astarjian's life personally. His incarceration with the Ba'th leaders in Al-Rasheed Military Base, gave him a special look at their psyche and a negative sense for the future of Iraq; that, influenced his decision to leave the country.
Finally, the book pursues the psychological effects the Iraqi defeat in Palestine (1948) had on the Iraqi person and the Armed forces. It details the on-the-spot formation of the Iraqi “Free Officers” movement (whose founders later became the author's prison mates) who, a decade later, waged a coup against the Hashimite regime.

About the Author
Henry D. Astarjian is a neurologist who grew up in Iraq. He has lived in the United States since 1966. He attended the Royal College of Medicine in Baghdad and was in the Iraqi Army during the 1950s. He is the author of several articles on Iraqi Kurds and Armenian issues.