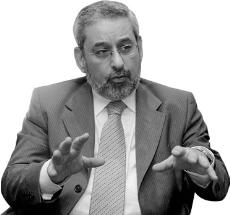 Lebanese-Armenian Member of Parliament Hagop Pakradouni (member of Tashnaktsoutyoun Party) visited Kuwait, Abu Dhabi and Sharjah in week long tour, during which he attended May 28 celebrations of the 89th anniversary of the First Republic of Armenia in all these locations.

On 27 May 2007 Kuwaiti daily “Al Qabas” conducted an interview with Hagop Pakradouni. The general political situation in Lebanon and the developments of the last few months were discussed during the interview.

“We consider the current Lebanese government not legitimate”, said Pakradouni adding that “this is the reason that everything has been brought to a near halt in Lebanon”. He accused almost all political parties for allowing foreign interference in Lebanese affairs. “Many Arab and Islamic countries, US and France try to intervene in Lebanon” he admitted.

Pakradouni said that the Lebanese agree Hizbullah was the power behind the resistance (against Israel in the summer of 2006). He argued that disarming Hizbullah should not be made by force. About the International Court on Hariri's assassination he said that all Lebanese parties agree on the necessity of such Court, but he underlined the need for not violating the sovereignty of Lebanon.

Regarding the current conflict in Nahr al-Bared in Tripoli between the Fath al-Islam radical Palestinian group and the Lebanese Army, Pakradouni noted that this group, though carries an Islamic name, nevertheless it is not related to Islam. “Islam does not believe in the rightness of beheading Lebanese Army soldiers”, commented Pakradouni.

“We say with regret that it is uncertain into what direction the situation in Lebanon is heading. It is obvious that the current situation is creating opportunities for many, including terrorist organizations, to develop activity in the country”, underlined Pakradouni. “We have to tune down our verbal attack against the Syrians, because Syria is our only land passage and we need to develop mutual respect between both sides”, added.

Pakradouni mentioned that his visit was for the purpose of meeting the Armenian Community in Kuwait. Personally, he had been in Kuwait for the first time in 1997. During this visit he witnessed the remarkable developments taking place in the country, in which the Armenians also are taking part as long-time residents.

Pakradouni was a guest-lecturer at the Armenian Community's traditional May 28 celebration day, which took place in Hilton Resort and attracted about 600 Armenians, some from locations as far as Abu Dhabi and Qatar. In his speech he referred to the heroic battle of Sartarabad (1918) in which the Armenians defeated the advancing Turkish troops and announced the formation of the Armenian authority on part of the historical Armenian land after 600 years of foreign domination. “There were some who blamed us for keeping the national flag intact for complete 70 years during the Soviet rule, but we were sure one day freedom will return back to Armenia. We were the creators of the first Armenian Republic and this is why we knew that our people was capable of re-establishing its independence once again in 1991”, said Pakradouni.

Revolutionary songs performer Karnig Sarkissian from USA and Hovsep Kasbarian from Syria created a very elevated atmosphere in the party. Munir Tarpinian was the master of the ceremony.

In the following days Pakradouni visited Abu Dhabi and Dubai (31 May and 1 June 2007 respectively), where he repeated his highly inspiring speeches, taking the public back to the time of our heroic struggle for statehood and independence.

It is worth mentioning that Karning Sarkissian performed last year (2006) in Dubai, in an equally memorable occasion. The DVDs of that party (the 88th anniversary of the First Republic of Armenia), are ready for public purchase. Each set contains 2 DVDs (total 4 hours). The price of the set is 75 dirhams (US$ 20). To have your own copy kindly visit the Armenian Church in Sharjah (administrative office) any day from 8:00am – 1:00pm, except Fridays. 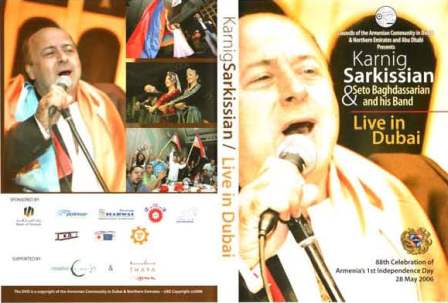