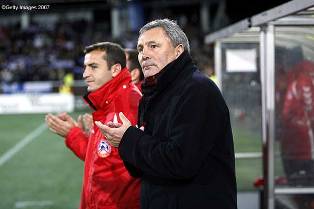 by Khachik Chakhoyan from Yerevan

Victory dance
Hamlet Mkhitaryan's second-half free-kick earned Armenia a second successive qualifying win and struck the Group A leaders a major blow as they look to reach UEFA EURO 2008?. Prime minister Serzh Sargsyan caught the mood of the moment in the VIP area at the Republican Stadium last night, performing a dance of joy at the final whistle before heading for the dressing room to congratulate the players.

'Winning mentality'
“Our lads finally showed what we expected of them which is willpower, character and a desire for victory,” said Football Federation of Armenia vice-president Ashot Manukyan. “Despite missing a number of players Ian Porterfield managed to find appropriate replacements and instilled a winning mentality in the team in a short period of time. Now we hope that football will blossom in Armenia.”

Battling underdogs
Scottish coach Porterfield was thrilled with his side's performance. The 61-year-old former Chelsea FC manager said: “We played like a united squad, like an iron fist against Poland. That is why we achieved what we wanted so much. Poland have a much stronger squad but our commitment helped Armenia to achieve the best possible result in this game.”

Armenian heroes
He gave special praise to goalscorer Mkhitaryan while goalkeeper Gevorg Kasparov, who made a string of vital saves to deny Leo Beenhakker's Poland, also emerged as a hero. “I am especially grateful to Hamlet Mkhitaryan and Gevorg Kasparov,” he said. “Mkhitaryan was unstoppable and proved to be the real leader of the moment while Kasparov was flawless in goal.”

Everyone's celebration
Mkhitaryan, meanwhile, was eager to share his moment of glory with his team-mates as they celebrated after the final whistle, even if their seven points from seven matches is not form that will ultimately take them to the finals. He said: “We need wins like this to believe in ourselves, to take confidence into other matches. I'm very happy I scored the winner but this victory belongs to us all – my team-mates and our fans who were behind us for the whole 90 minutes.”