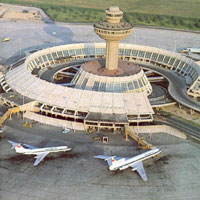 Armenia is one of the top emerging economies in the Caucasus. With its strategic geographical location, this country is the historical gateway between Asia and Europe, a bridge between the East and West. In the last few years, Armenian economy has grown spectacularly, along with the number of business opportunities. Moreover, thanks to its rich historical and cultural heritage, the country has become a popular tourist destination with a higher growth potential within the region.

In 2002 Armenia International Airports decided to start the renovation and extension works of Zvartnots International Airport, in Yerevan, the country?s capital. After less than 40 months, the new terminal has just been opened, with the intention of becoming a link for tourism and commerce between Asia and Europe.

Armenia International Airports, the company in charge of the management, aim to turn Zvartnots into an international centre connecting Armenia with the world and opening the country to foreign visitors. Road infrastructure in Armenia is currently being surpassed by the ever-increasing trade traffic within this region of the Caucasus. In spite of the efforts made by the Armenian government to improve their national road network, the country?s short-term business goals will depend mainly on air transport.

Improvements at Zvartnots will involve a total investment of ?164 million for the next 30 years. Now, the first phase is complete, the airport boasts a 54,000 sq m runway and 45,000 sq m of building. In addition, a new terminal was created that occupies a 25,000 sq m area. After completing the project, the company expects that the airport will achieve a passenger-traffic of over 2 million people in its first year. In order to adapt to the forthcoming increase in visitors, new parking has been created, with capacity for 1,000 vehicles. In terms of freight transport, Armenia International Airports has fitted-out a new cargo terminal, which can house a variety of cargo and has capacity for 100,000 tons per year.

34 international airlines will now operate from Zvartnots, connecting Yerevan and Armenia to the world?s most important cities, including London. Altogether around 60 routes will be scheduled to fly from Zvartnots.

High security, technology, and comfort
In order to comply with the international air regulations, Armenia International Airports has made a great effort to improve security at Zvartnots. Among other measures, 150 surveillance cameras have been installed in the premises, both inside the buildings and in open spaces.

The modernisation effort has been significant, including the implementation of an innovative flight information display system (FIDS) as well as new automated and biometric-identification systems for baggage check-in and passenger control. Also all buildings are now equipped with Wi-Fi Internet connection.

In addition, the company has focused attention on improving visitors? comfort within the premises. Arrivals hall capacity has been doubled to reach a volume over 1,000 passengers per hour, and passenger management will be streamlined between three and four-fold thanks to a substantial extension of the customs points.

Finally, the renovation of the airport?s relax areas and restaurants has been extensive, together with the enhancement of the Duty Free shops? product offering.