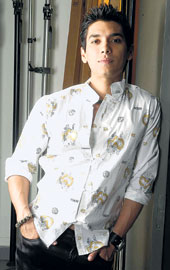 KUWAIT CITY: He promised the audience dollops of music, fun and excitement before the show and indeed he lived up to his word until the very end. Shayne Hyrapiet, a well-known Indi-pop singer, with his sublime performance on Friday enchanted music aficionados at India Day organized in the Doha Entertainment City. The show was a resounding success with as many as 14,000 people attending the event. The singer churned out an array of popular Hindi and English numbers that had the crowd doing an ant in the pants jig.

Shayne kicked off the mega-event on a rather steady note but soon shifted the gear by turning to some bouncy numbers that magnetized the crowd to the floor as old and young alike rocked the evening away. Shayne?s near-perfect rendition of Peter Andre?s number ?Mysterious Girl? brought the house down. Spurred by the positive response, the singer then sang the song: ?It?s Time to Disco? with equal gusto. Young members of the audience formed a group and began dancing in circles and when the song came to an end the crowd shouted in unison: ?Once more. Keep going, Shayne.?

The show, an annual feature, has the distinction of hosting noted Indian artistes including Sukhbir, Bali Brambhatt, Shaan, K.K. among others, and is easily the biggest Indian event in the country. The event passed off incident-free as elaborate security measures were in place. As the evening progressed, Shayne built camaraderie with the crowd and constantly probed pulse of the audience even as he sung a few songs requested by his fans.

Local artistes, young and old, came up with sizzling dance performances and won the admiration of the crowd. The special lighting effects coupled with the high-decibel sound system added punch to the show. Shayne was assisted by the DJ Anik whose good sense of music proved instant hit with the crowd. The show was compered by Nita and Lloyd.

Music
Speaking to the Arab Times on Saturday, Shayne said: ?I have performed in a number of foreign countries and my music was well-received by the audiences in those countries. I not only perform at the Indian community functions abroad but other communities also rope me in largely because of my diction and accentuation.? Shayne will perform in Canada and in the US in August, 2007.
Born in 1980, Shayne is an exceptional track performer the city of Kolkata has produced over the last decade. An Armenian born in India, the singer has been roped in by international tours and travel agency SOTC to perform in destinations across Switzerland in addition to world-wide audiences.

?I represented my country in Switzerland last year and my work was appreciated by the people there. I travelled to different cities and sang for people who had only a faint idea about India and its culture,? says Shayne. The Minus-1 performer has his hands full with a string of corporate and private shows at the moment. ?The major shows that I did in the past one-year were for Hope Foundation and Jet Airways. In December, I did more than 20 shows in 30 days. I was travelling almost every day. It was hectic but very satisfying,? smiles Shayne.

The star has shared stage with everyone from Usha Uthup to Shaan and Bombay Vikings. Shayne sings in Hindi, Punjabi and English and even in Bengali, Spanish and Italian if an occasion calls for it. He is ever ready to sing for religious events as well as charitable causes. His repertoire extends from hits of the 60?s, 70?s and 80?s to the latest English hits, Hindi film songs and remixes (old and new) and the very best of Punjabi Bhangra, covering a wide range of music genres such as rock, funk, ballads, gospel, hip hop, blues etc.

Asked whether he has any plans to release a music album, Shayne said:? I have a lot of original music in my kitty but I do not plan to release it in India simply because my main forte is English. I plan to take all my music to London where I plan to visit in July and give it a shot there. I hope things work out for me soon.?

Universal
He recently sung in an English film which will hit the streets soon.The indi-pop star has also the distinction of sharing the stage with numerous Calcutta bands and has large fan base in Bangladesh. According to Shayne, music is a universal language which brings smile on people?s faces and has no downside to it. Shayne has a large fan following among the college-going crowd. Explains the singer: ?I do a lot of peppy Hindi and English songs and the students seem to love them.?

?I am happy with the way things are going on for me. I do about six or seven shows a month in India. I have not performed in other Gulf countries but would love to stage a show in Dubai.? So far, the singer has performed in countries such as Thailand, Switzerland, Bangladesh, America and Bhutan. Shayne is of the view that there is a cut-throat competition prevailing in the music industry in India, but everyone gets their share of pie, and that there is amity among singers.

Hailing from a musical family, Shayne?s father was a member of the well-known band that ruled the roost across the country. ?My uncle used to be a good singer but sadly could not continue because of physical disability. All my cousins are also into music,? he added. Shayne went on to explain that the music scene in India is too electronic-oriented and that people are fast losing their respect for old songs because a large number of new songs are being regularly released.

In the same vein he added: ?There is no more creativity involved in the industry and music scene has reached a saturation point wherein after a couple of years each and every song will have a striking resemblance.? Replying to a question, he said he sings a lot of songs of Bryan Adams and George Michael etc. and that this was one of the reasons his music found acceptance among people of different spectrum. ?Kuwait is beautiful place?-and the people are very friendly.?

To a question whether he would like to carve a career in Bollywood, the young star said: ?Yes, I would like to sing in Bollywood movies. I hope I will get a break soon.? Recounting his most memorable experience in his career, the singer observed that he was invited to perform at a school in Jamshedpur, India and that when he arrived at the venue he saw rows of students and teachers waiting to welcome him. ?I am not that big of a singer to receive such a reception. This experience is etched in my memory like a serial number,? he added.

“On a shifting stage”

From being a beloved on the local stage, Shayne Hyrapiet is fast becoming a favourite for corporate shows in India and abroad. And he sure is not complaining.

Last year saw Shayne going on a four-month-long whirlwind tour of Switzerland, playing for tourists from all over the world. This year too, SOTC (the company that signed him on last) is taking him on a five-month tour of Switzerland. ?I am quite excited about the upcoming tour. I represented my country last year and my work was appreciated by the people. I travelled to different cities and sang for people who had only a faint idea about India and its culture. I hope this time too I live up to my reputation of being a popular Indi-pop singer,? says Shayne.

The singer from Chandni Chowk is also being kept busy by a string of corporate and private shows. ?The major shows that I did in the past one year were for Hope Foundation and Jet Airways. In December I did more than 20 shows in 30 days. I was travelling almost every day. It was hectic but very satisfying,? smiles Shayne.

The young Armenian is also planning to produce a Christmas carol album at the end of the year, to be circulated among schools, colleges, churches and members of the Christian community.

Born on May 21st 1980, he has been singing since the year 2001 and has now become one of the most recognized  faces in the entertainment circuit in India with an equally large international market to  compliment his growing popularity.

Thanks for Boghos Mardirossian for compiling the article

Newer PostThe washing of the feet service in Antelias and Etchmiadzin
Older Post'Sosi' by Linda Ghan, reading and discussion in Otawa