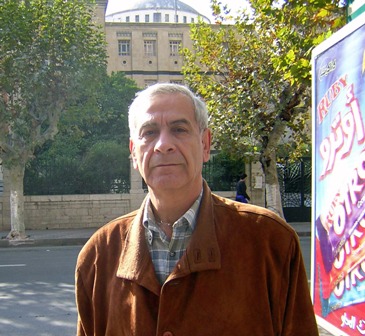 AZAD-HYE (11 December 2005, : , the capital of is one of the oldest continuously inhabited cities in the world. It is situated in the South-East corner of , on the bank of a river called Barada, surrounded by a constantly shrinking oasis. is very much known in the Christian history as the place where was converted to the new religion.

It is estimated that some 80 thousand Armenians live now in , out of which 6 thousands live in and the surroundings areas (total number of families is 1200). After a period of emigration in the sixties and seventies in the last century, the number of the Armenians in the city achieved a kind of stability in the two decades. New businesses managed to stop the flow of the emigrants and at some point Armenians from troubled Middle East countries such as and took temporary refuge in the city. Recently a number of Iraqi Armenians have been settled in .

The Armenian Apostolic Church of Damascus (Saint Sarkiss) is situated at the end of the famous ?Street Called Straight? just next to the Eastern Gate (Bab Sharqi), while the Armenian Catholic Church of Notre-Dame of the Universe is close to historical Bab Touma (The Gates of Apostle Thomas). Not far from this location is the Evangelical National Church of Syria, where Evangelical Armenians (very limited in number) do their worships.

For a long time Damascus Armenians had internal disputes, with the result that there was no elected Armenian National Council under the auspices of the Church for more than four decades. Being in the middle of the influence of both Etchmiadzin and Antelias (with a pre WWI history linking the Damascus to the Armenian Patriarchate of Jerusalem), Armenians of Damascus were used to live in the shadow of larger communities such as Aleppo and Beirut. In the recent elections (2004) slightly more than half of the votes went to the coalition of Ramgavar and Henchak forces. Opposition Dashnaktsoutyoun forces believe that the followers of the former two parties had been controlling the Registry and the supporting Archives of the Church, familiarizing themselves with the voting mechanism and using it for their advantage through calculated methods. This, they say, helped them to access many Armenians who were no longer speaking the language or involved in Community affairs, gaining their voting power.

Facing high rents, a large proportion of Damascus Armenians, especially large families or newly married couples, are shifting now to a new neighborhood in called Jaramana, populated with a majority of Druze and Christian minorities. Almost One third of the Armenians of Damascus (2000 persons) are estimated to be in this new quarter, located on the way to .

In order to cater to the needs of this newly formed community, Archbishop Shahan Sarkissian of neighboring Aleppo Prelacy was invited in 2004 to inaugurate a new complex that would consist of a school (replacing the old Union / Miatsial School in downtown Damascus, functional since 1927), an old people?s house and a club (with adjacent athletic infrastructure).

We met Mr. Parsegh Kevorkian, Chairman of the committee overlooking the construction of the new educational, social and athletic complex, who provided us with important details about the course of this vital mission.

Before the inauguration, a group of five Armenian engineers were assigned to do several field surveys for the purpose of selecting the land. The total surface of the purchased land was 17.000 square meters.

Mr. Kevorkian informed us that the Syrian local authorities have agreed in October 2005 to allow the building of the above complex on 25% of the total land surface (leaving the rest of the plot to greenery). A total of three years period is needed to complete the construction of the buildings. It is believed that many Armenians, especially the old graduates from (some of them successful in and abroad) will contribute to the fund raising campaign. The old school building would be eventually demolished and replaced with offices in the heart of just 300 meters far from the Syrian Parliament.

For land survey, power maintenance and fencing of the new project about US$ 400.000 has been spent up to this point. It is obvious that additional funds are required for the whole project.

We think that the Armenian Community in has a unique opportunity to show its willingness to achieve a better future, with the alliance of all its fractions. The upcoming facilities should be used by all Armenians.