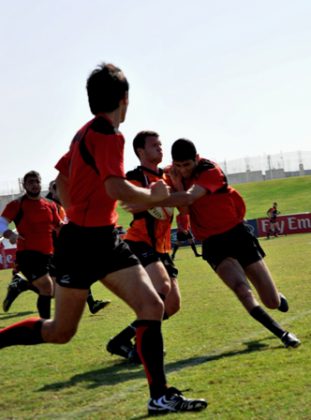 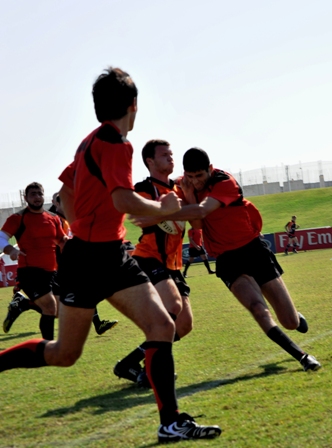 The idea of establishing Ureni rugby club was born in Dubai

Robert Melkonyan, 69, is one of the outstanding veterans of Armenian sport. He has been playing rugby since 1963 and was one of the founders of that sport in Armenia. In 60-70s he played as captain and then was coach of several teams including rugby national team of Armenia.

Since 2000, as a prominent rugby veteran he played a key role in reviving the interest towards that sport in Armenia by organizing teams in several cities and villages of Armenia and introduced it as a part of military training in the army. In 2009 Rugby Sport School for Juniors was set up by Ureni Rugby Club and named after Robert Melkonyan for his merits and services.

During a recent tournament in UAE we had the following interview with Robert Melkonyan:

Mr. Melkonyan, you are one of the first in the ex-Soviet Union that has started the Rugby sports. Can you tell us the history of rugby in Armenia and how this was developed? Was there any interval?

Rugby was introduced in Armenia back in 1963, but get official recognition in 1965. By 1967 rugby teams had been formed in all the major sport clubs of Armenia ? Spartak, Dinamo, Burevestnik and Ashxatanq. Rugby was also played in several university clubs. The leading team had been Dinamo, and based on that the national team of Armenia was formed. The national team of Armenia was rated 9th amongst 29 rugby teams of ex-Soviet Union. However, unfortunately by the end of the 1980s and first years of independence in 1990s, due to transitional processes and general hardship rugby teams were dismantled and that sport was not developing. By 2000 a new Rugby Federation has been formed, then thanks to the efforts of some veteran players interest towards rugby was revived. Several teams were formed in Yerevan and Ashtarak cities, Khor Virap, Marmarik and Sos villages, as well as in several military academies, formations and units. I also founded ?Ruby -7? Club and Association of the Rugby Veteran Players.

What can we say about the current situation of rugby in Armenia? Do you believe that the game can have future? What is required in order to create some interest in the ranks of children as future players and the adults?

Currently, there are 3 rugby teams in Armenia called Ureni, Ararat and Artashat. Since its establishment in 2009 Ureni is the leading team. It is affiliated also with the Melkonyan Rugby Sport School for Juniors where children and youngsters are trained on complimentary (free) basis. Well, in Armenia we are not that successful in the sport types that requires intensive and effective interaction in a group, most of our achievements are in those types were individual performance is the key to success. Fortunately this is changing now. Rugby does have the future and has a special importance for Armenian youth as it promotes teamwork, motivation towards common goals, sense of belonging, respect and support to others and adherence to rules in stressful environment etc.. Rugby also combines in itself elements of athletics, wrestling, situational strategy decisions and a fun of a collective game. Worldwide rugby becomes so developed in its forms, relevant rules and its popularity that now it is played in small groups, at all ages and genders – one of its most entertaining forms Rugby 7 is included in the coming Olympic games.

Now, rugby is developed in Armenia based only on the enthusiasm of few individuals ? mainly former veterans. There is almost no involvement at the state/government level, nor is rugby yet at the status to create commercial incentives for the business from investments or advertising aspect in Armenia. However, we can see on the example of few alike countries that with wise inputs rugby could become one of the flagship sports of the nation making it represented in the world arena, e.g. neighboring Georgia, not to mention some tiny countries in the Pacific e.g. Samoa and Fiji known to the world mostly due to their achievements in rugby.

The appearance of Ureni Armenian rugby team in Dubai during a recent tournament was a surprise for us. Can you inform us how the idea of this participation started and materialized? Was it easy to come to Dubai and how it was possible to cover the financial expenses? What did the team gain from this exposure?

Well, in fact the very idea of establishing Ureni Club was born in Dubai. Me and my former trainee, now businessman Gegham Harutyunyan, one of the owners of landmark restaurant Ureni in Armenia, were watching games at Rugby Sevens World Cup in Dubai in 2009, then inspired decided to spur a new phase in development of rugby in Armenia. ?Rugby -7? was reorganized into Ureni Rugby Club, then a fully sponsored Melkonyan Rugby Sport School for Juniors was set-up to support the club with resources.

Though Ureni?s youngster team had couple of games with teams from other countries, this was the first time we had the team participating in such a tournament. In fact, due to some formalities the team has to be registered for Dubai Rugby 7s into the category that assume facing very competitive clubs with over 20-25 years of history and much more experienced and senior players.

Having Ureni team to participate in a competition of this calibre was not easy as it involves many organizational, logistical and financial issues to be resolved. The participation has been mainly sponsored by Gegham Harutyunyan and his friends who are committed to support the Club and its facilities and activities since its start-up. Organizational issues have been managed by my son (Artak Melkonyan), who lives in Dubai and had supported the club and the school from its set-up by providing equipment, outfit and 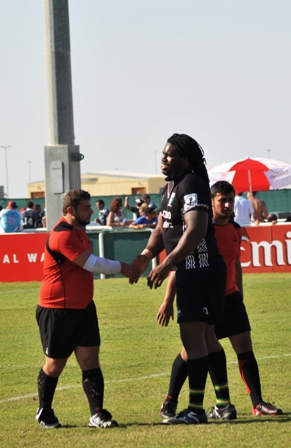 Games were tough, as we were facing very experienced and strong competitors. But experience gained and inspiration from participating in the event has been extremely beneficial not only for encouraging development of the Ureni team; we see now that those impressions have been shared back home in Armenia and motivation is spurred amongst all the other teams, players and amongst even those who are just start following it. Definitely this excitement will inspire more young people to join rugby, stimulate further development of rugby in Armenia.

Did the team have the chance to meet with the Armenian community in UAE? Do you think there is prospect to create a small rugby team here since we know that your son Artak lives in UAE and you visit UAE frequently?

Yes, in fact the team was hosted at the dinner organized by the Council of the Armenian Community in the Northern Emirates. My special thanks to Hagop and Nshteh ? it was most encouraging to see Armenian tricolor and young people with orange-blue-red make-up, shirts and scarves here in Dubai cheering for us.

It would be awesome if we could organize and compile a rugby team in UAE. There seems to be football games happening regularly and why not rugby. I know that there are some Armenians playing in the rugby clubs here in UAE. One of them – Mossine Koulakzian helped us a lot both with his participation and readiness to support at the games and with organizational and fundraising efforts. If organized properly and seriously supported, with all the facilities available in UAE, which now became one of the world centers for Rugby 7, such a team could be quite successful. We all heared of the prominent successes of Armenian youngsters rugby team from Kolkata, India (By the way, some of those guys playing there are back to Armenia and amongst the leading players in Ureni Club). Not to mention about strong rugby traditions in the Armenian Diaspora in France thanks to which we have quite strong Armenian national rugby union team that plays in the European Nations Cups.

Newer PostPilgrimage to Chinsurah
Older PostManga Messiah available for the first time in Armenian and in Cyprus!