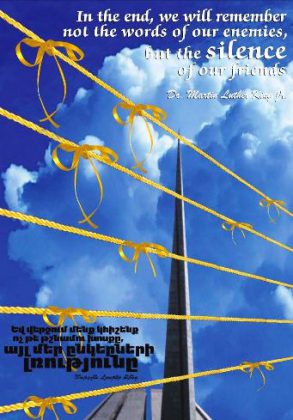 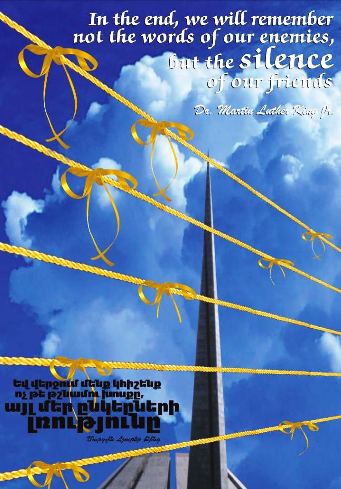 To support John Marshall Evans, the recalled United States Ambassador to Armenia and to protest against official denial of the Armenian Genocide, a group of American Armenians and friends organized the “Yellow Ribbon Campaign”? (see press release below), in which hundreds of thousands of marchers on 24 April 2006 in Yerevan, will be tying yellow ribbons on ropes stretched along the walking path leading to the Genocide Monument in Tsitsernakaberd.

This campaign adopted Martin Luther King's quote when he said: “At the end, we will remember not the words of our enemies, but the silence of our friends.”

For more clarifications and explanations about the ?Yellow Ribbon Campaign?, Maral Der Ohanesian of ?The Armenian Affairs? asked Harut Sassounian, the Publisher of the ?California Courier?, few questions, and he kindly answered as follows:

Who are the organizers of this campaign, we know that they call themselves “Armenian Americans”, what are their names?

– In terms of the organizers, they are a small group of Armenian Americans who live in and their friends in .

– Ambassador Evans was officially notified by the State Department that he is being recalled.

What is going to happen next to Ambassador Evans? Will he be retired, or degraded?

– Ambassador Evans is losing his job.

How would the messages of Yellow Ribbons be communicated to US State Department? Is there a plan to photograph or video tape the action?

– The Armenian press and TV will cover the yellow ribbon campaign on Monday, April 24.

Do you expect a positive reaction from the State Department, or this campaign is mainly about solidarity and support to the brave stance of Ambassador Evans?

– I do not expect a change of position from the State Department. However, I believe that we need to put pressure on them so that they would think twice in the future before taking an anti-Armenian decision.

Is there an organization in that will help in spreading the Ribbons?

Is there any significance for the “Yellow” color? Is it a symbol or a sign for something?

Yellow ribbon is a well known symbol in the . Every American, especially American officials at the State Department would understand very well the meaning of this yellow ribbon campaign. It is a tribute for a fallen soldier or missing person. It is a tribute and a silent protest on behalf of Ambassador Evans.

So dear friend, if you are going to march on Monday April 24, 2006, make sure you won't forget tying the Yellow Ribbon in Support of this campaign.

Below is the Press-Release of the Campaign.

?In the end, we will remember not the words of our enemies, but the silence of our friends? Dr. Martin Luther King Jr.

Organized by Armenian-Americans in and Friends, a newly created, ad-hoc group based in the , the grassroots campaign will take place at the Tsitsernakaberd Memorial to the Armenian Genocide in . The monument is dedicated to the 1.5 million victims of the Genocide of the Armenians perpetrated by the Ottoman Turkish Empire between 1915 and 1923.

On April 24, 2006, when hundreds of thousands of marchers will converge on the Tsitsernakaberd Memorial in commemoration of the victims of the Genocide, the Yellow Ribbon Campaign will commence by participants tying yellow ribbons on 100-meter long ropes stretched along the walking path leading to the .

?During the last number of years, we have witnessed public denials of the Armenian Genocide by several diplomats,? said Paula Devejian, a member of the group. ?Such politically motivated actions are offensive and insulting. By attempting to dismiss the indisputable fact of the Armenian Genocide, those engaged in denial insult the memory of the victims, their descendents and the Armenian nation as a whole. In our present-day reality of a free and independent , Armenians throughout the world feel the pain of denial even more when it?s perpetrated by representatives or leaders of countries that are otherwise acknowledged as friends and allies of .?

According to Devejian, the Yellow Ribbon Campaign was put into motion following what is widely regarded as the Bush Administration?s retribution against Ambassador Evans for publicly labeling the events in Ottoman Turkey at the beginning of the 20th century as ?genocide?. Soon after the Ambassador?s comments, (made in statements to Armenian-American leaders in February 2005), the U.S. State Department forced Evans to publicly retract his statements and apologize, then coerced the American Foreign Service Association into an unprecedented move of rescinding the prestigious ?Constructive Dissent? award he was granted, and now subsequently, the Ambassador is being recalled from his post and forced into early ?retirement?.

?It is difficult to see a great ally and friend of Armenia like the U.S. as an objective and unbiased mediator in the Nagorno-Karabagh peace process and Armenian-Turkish relations when our government is subject to Turkish pressure and blackmail, and resorts to censorship. We are amazed that the would allow a third country to affect the bilateral relations between itself and Armenia.? said Devejian.

?We believe that the American Government must be the standard bearer of free speech and human rights, and we are concerned that its actions against Ambassador Evans amount to less than an adequate commitment to these principles.?

The newly formed group also cited examples of foreign diplomats denying the Armenian Genocide while holding posts in Armenia, including Israeli Ambassador Rivka Cohen, who in 2002 dissociated the Armenian Genocide from the Jewish Holocaust, thereby questioning the fact of the Genocide; and U.K. Ambassador Thorda Abbott-Watt, who in 2004 denied the Genocide, causing outrage in Armenia and Armenian communities throughout the world.

?Such disrespectful acts against the Armenian people and nation will continue if we do not put an end to the complacent acceptance of such politically motivated diplomatic denial by these countries. States have an obligation to understand that the promotion of democratic values, principles and true freedom come through their own actions and examples,? Devejian explained. ?The Yellow Ribbon Campaign is an expression of protest against Genocide denial and punishment of free speech. It is an impassioned, peaceful call by Armenians from all walks of life for fairness and justice, in both political and humanitarian terms.?

Armenian Americans in and Friends