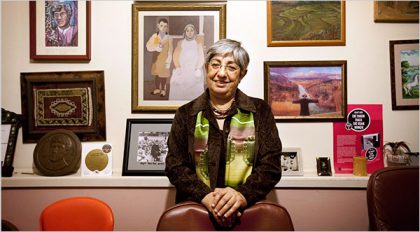 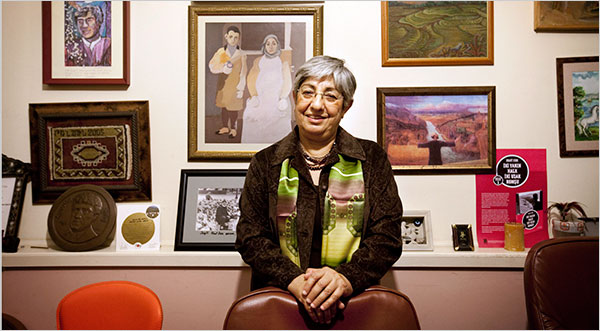 She was a young law student when her beloved maternal grandmother, Seher, took her aside and told her a secret she had hidden for 60 years: that Seher was born a Christian Armenian with the name Heranus [Hranoush] and had been saved from a death march by a Turkish officer, who snatched her from her mother?s arms in 1915 and raised her as Turkish and Muslim.

Ms. Cetin?s grandmother, whose parents later turned out to have escaped to New York, was just one of many Armenian children who were kidnapped and adopted by Turkish families during the Armenian genocide, the mass killing of more than a million Armenians by the Ottoman Turks between 1915 and 1918. These survivors were sometimes called ?the leftovers of the sword.?

?I was in a state of shock for a long time ? I suddenly saw the world through different eyes,? said Ms. Cetin, now 60. ?I had grown up thinking of myself as a Turkish Muslim, not an Armenian. There had been nothing in the history books about the massacre of a people that had been erased from Turkey?s collective memory. Like my grandmother, many had buried their identity ? and the horrors they had seen ? deep inside of them.?

Now, however, Ms. Cetin, a prominent advocate for the estimated 50,000-member Armenian-Turkish community here and one of the country?s leading human rights lawyers, believes a seminal moment has arrived in which Turkey and Armenia can finally confront the ghosts of history and possibly even overcome one of the world?s most enduring and bitter rivalries.

She already has confronted her divided self, which led her from Istanbul to a 10th Street grocery store in New York, where her Armenian relatives had rebuilt their broken lives after fleeing Turkey. (Many of the Armenians who survive in Turkey today do so because their ancestors lived in western provinces during the killings, which took place mostly in the east.)

The latest tentative step toward healing generations of acrimony between the countries took place in October on a soccer field in the northwestern Turkish city of Bursa, when President Serzh Sargsyan became the first Armenian head of state to travel to Turkey to attend a soccer game between the national teams. In this latest round of soccer diplomacy, Mr. Sargsyan was joined at the match by President Abdullah Gul of Turkey, who had traveled to a soccer match in Armenia the year before.

?We do not write history here,? Mr. Gul told his Armenian counterpart in Bursa. ?We are making history.?

The Bursa encounter came just days after Turkey and Armenia signed a historic series of protocols to establish diplomatic relations and to reopen the Turkish-Armenian border, which has been closed since 1993. The agreement, strongly backed by the United States, the European Union and Russia, has come under vociferous opposition from nationalists in both Turkey and Armenia.

Armenia?s sizable diaspora ? estimated at more than seven million ? in the United States, France and elsewhere is alarmed that the new warmth may be misused as an excuse to forgive and forget in Turkey, where even uttering the words Armenian genocide can be grounds for prosecution.

Also threatening the deal is Armenia?s lingering fight with Azerbaijan, its neighbor and a close ally of Turkey, over a breakaway Armenian enclave in Azerbaijan.

The agreement, which has yet to be ratified in the Turkish or Armenian Parliaments, could have broad consequences, helping to end landlocked Armenia?s economic isolation, while lifting Turkey?s chances for admission into the European Union, where the genocide issue remains a crucial obstacle.

But Ms. Cetin argued that the most enduring consequence could be helping to overcome mutual recriminations. She said Armenians had been battling a powerful and collective denial in Turkish society about the killings.

?Most people in Turkish society have no idea what happened in 1915, and the Armenians they meet are introduced as monsters or villains or enemies in their history books,? she said. ?Turkey has to confront the past, but before this confrontation can happen, people must know who they are confronting. So we need the borders to come down in order to have dialogue.?

Ms. Cetin, who was raised by her maternal grandmother, said the borders in her own Muslim Turkish heart came down irrevocably when her grandmother revealed her Armenian past.

Heranus, she said, was only a child in 1915 when Turkish soldiers arrived in her ethnically Armenian Turkish village of Maden, rounding up the men and sequestering women and girls in a church courtyard with high walls. When they climbed on each others? shoulders, Heranus told her, they saw men?s throats being cut and bodies being thrown in the Tigris River, which ran red for days.

During the forced march toward exile that followed, Heranus said, she saw her own grandmother drown two of her grandchildren before she herself jumped into the water and disappeared.

Heranus?s mother, Isguhi, survived the march, which ended in Aleppo, Syria, and went to join her husband, Hovannes, who had left the village for New York in 1913, opening a grocery store. They started a new family.

?My grandmother was trembling as she told me her story,? Ms. Cetin said. ?She would always say, ?May those days vanish, never to return.? ?

Ms. Cetin, a rebellious left-wing student activist at the time of her grandmother?s revelation, recalled how confronting Armenian identity, then as now, had been taboo. ?The same people who spoke the loudest about injustices and screamed that the world could be a better place would only whisper when it came to the Armenian issue,? she said. ?It really hurt me.?

Ms. Cetin, who was imprisoned for three years in the 1980s for opposing the military regime in Turkey at the time, said her newfound Armenian identity inspired her to become a human rights lawyer. When Hrant Dink, editor of the Turkish-Armenian newspaper Agos, was prosecuted in 2006 for insulting Turkishness by referring to the genocide, she became his lawyer. On Jan. 19, 2007, Mr. Dink was killed outside his office by a young ultranationalist.

Ms. Cetin published a memoir about her grandmother in 2004. She said she purposely omitted the word ?genocide? from her book because using the word erected a roadblock to reconciliation.

?I wanted to concentrate on the human dimension,? she said. ?I wanted to question the silence of people like my grandmother who kept their stories hidden for years, while going through the pain.?

When her grandmother died in 2000 at age 95, Ms. Cetin honored her last wish, publishing a death notice in Agos, in the hope of tracking down her long-lost Armenian family, including her grandmother?s sister Margaret, whom she had never seen.

At her emotional reunion with her Armenian family in New York, several months later, Margaret, or ?Auntie Marge,? told Ms. Cetin that when her father had died in 1965, she had found a piece of paper carefully folded in his wallet that he had been keeping for years. It was a letter Heranus had written to him shortly after he had left for the United States.

?We all keep hoping and praying that you are well,? the note said.

Photo: Johan Spanner for The International Herald Tribune. Caption: Fethiye Cetin, a prominent member of the estimated 50,000-strong Armenian-Turkish community and one of Turkey?s leading human rights lawyers, believes a seminal moment has arrived in which Turkey and Armenia can finally confront the ghosts of history and possibly even overcome one of the world?s most enduring and bitter rivalries.