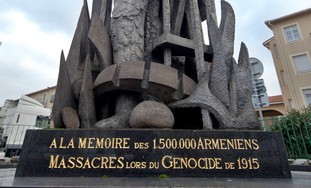 Israel must put an end to this charade and fully recognize the Armenian genocide.

In a recent article in The Jerusalem Post called ?Armenian Genocide: Israel must maintain its moral compass,? (see article below) the arguments set forth by Hakan Yavuz and Tal Buenos are a thin veneer for nothing less than a pro-Turkish government position of maintaining denial of the Armenian genocide.

What is their argument? For Israel to now to break its silence and recognize the Armenian genocide, it would be tantamount to confessing,  retroactively, that its been playing politics all along by remaining silent and, with crocodile tears, admitting that those of us who care about Israel cannot allow that to happen.

Wrong enough, but their basic argument is extended by a manipulative and factually irresponsible debate of the very concept of ?genocide.?

Suddenly the historic Polish attorney Raphael Lemkin, a Jew with a high post in the Polish government legal system who we recognize as having virtually given his life to bring into international law the concept of ?genocide? that he created, is characterized as ?an employee of the US Government? who he was serving to gain a moral advantage over the Germans after WWII.

There is not a word of recognition that Lemkin first submitted a resolution about the mass killing of religious and national entities to the League of Nations long before WWII. Lemkin was an employee of the US occupational Army in Germany very briefly after surviving the Holocaust in which he lost virtually all of his family. After giving up law positions at Duke University as well as Yale, he devoted himself full time to the passage of the Genocide Convention in the newly founded United Nations. The authors should be reprimanded severely for their distorted presentation of
Lemkin?s identity.

The key issue that emerges is the question of whether, after years of a realpolitik denial of the Armenian genocide, in disheartening obsequiousness to Turkey in an attempt to gain their favor at the expense of the basic moral principles that are intrinsic to recognition to another people?s genocide or holocaust, Israel?s recognition of the Armenian genocide would constitute another politicized move rather than a moral correction.

Finally, the authors seek to stall with a disingenuous promise, 70 years after the Holocaust, that further study of the concept of ?genocide? will bring us to an understanding we do not have, as if we do not know that genocide is the mass murder of a significant part of a targeted people, executed by a government or any other entity, such as a religious or ideological group or a terrorist organization.

The facts are well known: The Turkish government executed the Armenian genocide ? in which one to one-and-a-half million Armenians were murdered.

And for us Jews and Israelis, there are added meanings: One Israeli Professor at Bar Ilan University once characterized the Armenian genocide as a ?dress rehearsal for the Holocaust.? We also know that Hitler explicitly built on the precedent of the Armenian genocide when he went after us
Jews.

* The writer is executive director of the Institute on the Holocaust and Genocide in Jerusalem, editor of the Web Magazine GPN GENOCIDE PREVENTI0N NOW, a co-founder and former president of the International Association of Genocide Scholars and editor of the Encyclopedia of Genocide. He was awarded the Armenian Presidential Prize ?similar to the Israel Prize ? in Yerevan in June 2011 for his contributions to the study of denials of genocides?of course including the Armenian Genocide and the Holocaust.

Keeping silent on a moral issue for the sake of maintaining political ties with Turkey would be a declaration of moral bankruptcy.

Was the recent surfacing of the Armenian tragedy in the Israeli Knesset rooted in political or moral ground? Fully aware that the timing of the public debate on the Armenian tragedy recently held by the Knesset?s Education Committee is political to an embarrassing degree, Knesset Speaker Reuven Rivlin set out to negate this immediate perception by stating, more than once, that the reopening of the debate on the issue was not a matter of political or diplomatic considerations, but a moral duty.

Such rhetoric aims to establish a narrative according to which the Israel-Turkey political relationship held Israel?s moral position hostage. Now that Israel is free from its political commitments to Turkey, the argument goes, Israel may officially declare that what happened to the Armenians during WWI was genocide.

However, to argue that Israel did in fact keep silent on this issue for the sake of maintaining political ties with Turkey is tantamount to declaring Israel?s moral bankruptcy.

A state that prides itself on earnestly trying to do the right thing despite endless and tremendous challenges and unprecedented moral trials cannot afford to abandon its moral compass in this manner.

Is Israel prepared to sacrifice the integrity of its current president, whose position symbolizes Israeli consensus, and say that when Shimon Peres announced unequivocally in April 2001 that what happened to the Armenians was tragic but not genocide, he sold morality for political gain? Tragically, by blurring the differences between the Holocaust and the massacre of Armenians, Israel is harming itself by lending a hand to the continued practice of irresponsible use of the term genocide in other arenas of conflict, such as the conflict Israel itself has with the Palestinians. In a growing number of forums, campaigns against Israel?s position in its conflict with the Palestinians are armed with the term genocide as a weapon of mass political pressure.

This has already had a detrimental effect on Israel?s international relations, but will surely haunt it to a greater extent in days to come, especially should the United States reduce the level of its commitment to warding off accusations against Israel in the international system. Such a scenario may eventually lead to united international opposition against Israel, and perhaps even to outside interference with Israeli actions through international courts of law. Is it hard to imagine a possible law somewhere in Europe that would make it illegal to deny the ?genocide? of the Palestinians? Instead of letting politicians add more fuel to the fire of misuse of the term genocide, careful scholarly work must be done to investigate the transition from Holocaust to the modern-day use of the term genocide and put its politicization in proper academic perspective.

Scholars are invited to examine the historical context of post-World War II interests in Germany, and see how the American-led efforts to ?de-Nazify? and reeducate Germany introduced the term genocide via Raphael Lemkin, an employee of the US government, to cement the moral advantage they had over the Germans through international law, out of political interest, and not simply out of the goodness of their hearts.

Accordingly, the universal condemnation of the Nazi crimes in the Holocaust provided the necessary impact for the introduction of the Genocide Convention in the United Nations. Then, once the term was taking on a life of its own, its promoters sought to convince states to ratify genocide, the practice of universalizing the singularity of the Holocaust had begun, and the systematic extermination of Jews was now to be equated with many dissimilar events.

For instance, it is reported that while looking to persuade the Irish to ratify genocide and bring the term closer to their hearts, Raphael Lemkin told John Costello, the Prime Minister of Ireland, that the potato famine from which they suffered was a type of genocide.

In a world where a potato famine resulting from a careless shipping management is described by the same word as the deliberate attempt to exterminate all of Europe?s Jews, the Holocaust will surely be confused with cases of civil war. The Deutchtum (German character) of German Jews will be mixed up with acts of rebellion, and Nazi Germany?s irrational hatred and greed will be indistinguishable from a nation?s reasonable desire to survive a conflict.

The loose and superficial definition of genocide proved to be sufficient for promoting US interests in Germany post WWII, but not tight enough to save the term from becoming rich ground for interest groups that are seeking political momentum. While the well-being of the weak must be advocated, it cannot be done at the expense of a nation?s natural right to defend itself when threatened by other groups, be they strong or weak.

Every nation has the right to employ whatever means it has to fight for its survival, and should not have to do so at the expense of its moral standing in the eyes of other nations. This is a belief both Israel and Turkey share.

Turkey is uniquely positioned at the gateway between East and West, and as such, it holds the key for the long-awaited accommodation of the State of Israel in the region.

A common denominator for both might be found in the attempt to rescue the term genocide from further politicization. With this short essay, we intend to encourage increased scholarly dialogue on the concept of genocide: morally, philosophically, historically and legally. It is our hope that such activity would advance the field of genocide studies in both countries, and weather the storm between the two governments until the relations between the two nations know better days.