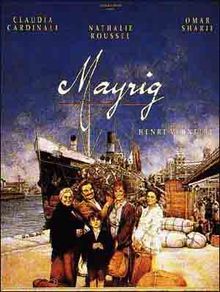 By Virginie Mikaelian from Canada

I am Armenian. Well? my father is Armenian and he was born and raised in France. He then decided to move to Quebec (Canada) to study but ended up staying here and bringing his parents. My mom is French-Canadian. I went to Armenian school and so I speak, write and read it. My grand-mother was one of the survivors of the genocide. She passed away a few months ago at the age of 98.

What does this have to do with the movie you ask? Everything. It has everything to do.

This movie made a lot of sense to me. Yes, the parts about the genocide were heartbreaking but I'm also speaking about the alienation the family feels after moving to France and how they try to adjust their values with the ones from this country they now live in.

Being Armenian and French-Canadian has caused me many headaches. And though today I am very proud of both cultures, the major differences between them sometimes still leaves me in a place of no man's land.

And the love we feel between the family members in the movie is VERY realistic.

After the genocide, it is love that saved the survivors from a life full of resentment. Sticking together and loving each other with all of their hearts and souls was the only way to move on.

Not forget. We can never forget.

But in order to put those dark days behind us and be happy again, we needed this love.

The way the parents genuinely sacrifice themselves for the happiness of their son is something I am very familiar with. My father did the SAME thing for me and for my brother. Armenian parents are like that.

But with this great generosity and unconditional love comes great expectations.

Of how we should live our lives. About what we need in order to be truly happy. And they care SO much. They literally live and breathe through us in a way. If we succeed, they succeed. If we are happy, they are happy. If we are sick, they are sick.

I'm not saying that if we fail, they fail. They are very supportive and as long as you do your best, they are always proud of you. And trust me when I say that we love our parents with all our hearts and are grateful for all that they did and all that they still do.

I am so proud to be Armenian. I am so proud of the strength of my people who not only lost everything and had to build from scratch but did it in the best possible way to give the children of tomorrow the chance to hope for something better.

But being Armenian gives you a responsibility. In memory of those who died but mostly, of those that survived and made it possible for YOU to be alive today. We have a responsibility to never give up on ourselves and on those who brought us into this world. And this feel of responsibility will be passed on to our children and so on. And as a child of the third generation, I find it sometimes hard to know what part of me wants what it wants because I really want it or because I know that this is what my family wants for me.

So I guess this movie helped me in a way… It helped me understand myself. Understand where I come from. And where I'm going…

From Wikipedia: Mayrig (Mother) is a 1991 semi-autobiographical film written and directed by French-Armenian filmmaker Henri Verneuil. The film's principal cast includes Claudia Cardinale and Omar Sharif. It is about the struggles of an Armenian family that emigrates to France from Turkey after the Armenian genocide of 1915.

Following the film's success, Verneuil edited the movie into a television series. He followed that up with 588 rue paradis, a sequel to the original movie.