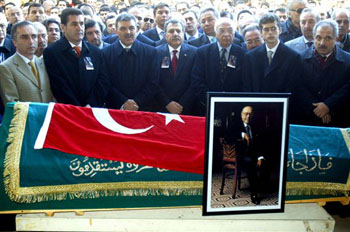 Ahmet Ertegun, the Founder and CEO of Atlantic Records passed away on Dec. 14, 2006 at the age of 83. He was the most famous Turkish American. His death was announced in newspapers and TV networks throughout the world. He was the son of Mehmet Ertegun, the former Turkish Ambassador to the who had played a key role in pressuring the State Department in the 1930?s to prevent MGM from making into a movie Franz Werfel?s classic novel, “The Forty Days of Musa Dagh.”

Ahmet Ertegun was a music magnate who launched the careers of many great singers and groups, such as Ray Charles, Led Zeppelin and the Rolling Stones.

Ertegun arrived in with his wife a couple of days later. He invited me to have lunch with him at the Peninsula Hotel in . For more than two hours, we discussed various Armenian-Turkish issues. It was a fascinating conversation. He was a gracious man who spoke with great charm, self-confidence and sincerity. He surprised me by saying that he could not understand why Turkish officials denied the Armenian Genocide — a fact known to the entire world. He made it clear that he was not acknowledging the Genocide in order to appease the Armenians. He believed that it was, first of all, in ?s interest to acknowledge the Genocide, because doing so would help ?s application for membership in the European Union and get rid of the stigma that had haunted his native land for so many years.

Ertegun said he had read about the Armenian Genocide in many Western books, but had not seen a single reputable book that denied its occurrence. He referred to Turkish officials who denied the Genocide as being “Turk ghafali,” implying that they had a stubborn Turkish mentality. We explored various ideas on how to encourage the Turkish government to acknowledge the Genocide. He suggested that he and I fly to on a private jet and meet with high-ranking Turkish government officials. I declined by saying that Turkish officials were not yet ready to acknowledge the Genocide. Instead, I proposed a number of steps that would prepare the ground for its acknowledgment by the Turkish government in the future. I told him that if prominent Turks such as himself, who enjoyed the confidence of the highest echelons of the Turkish state, would speak out on the Genocide, that would pave the way for its eventual recognition. He agreed to consider the possibility of issuing a public statement recognizing the Genocide.

Before leaving, he asked me again to fly to with him. I declined again his invitation and promised to stay in touch with him. He said he would return to in a few months and expressed the hope that we could go together at a later date. We parted very amicably. Due to his advanced age and ill health, we could not meet again, although we spoke several times by phone.

It is a shame that the public statement we had discussed regarding the Armenian Genocide never materialized. I was aware that he was a very influential man both in the and . He had contributed funds to many Turkish causes and had invited influential officials to attend Turkish events in and I knew that Ertegun was not contacting me because he was pro-Armenian, but because he sincerely wanted to help erase the stigma of the Genocide from ?s name. He firmly believed that once put the issue of the Genocide behind it, the country would attain the respect of the international community and would not waste its efforts and resources to counter Armenian efforts for Genocide recognition.

I could not write this column while he was alive since I did not want to make him the target of hate mails and threats from Turkish extremists by alerting them that he was considering the possibility of issuing a public statement on the Armenian Genocide. Alas, he passed away without being able to do so which is a loss for both Armenians and Turks. I hasten to add that it was a greater loss for . Ahmet Ertegun believed that by acknowledging the Genocide, would earn many political dividends and lose practically nothing!

Ahmet Ertegun, the music magnate who founded Atlantic Records and shaped the careers of John Coltrane, Ray Charles, the Rolling Stones, Led Zeppelin and many others, died today in Manhattan. He was 83.

A spokesman for Atlantic Records said the death was the result of a brain injury suffered when Mr. Ertegun fell backstage at the Beacon Theater in on Oct. 29 as the Rolling Stones prepared to play a concert to mark former President Bill Clinton?s 60th birthday. He had been in a coma since then.

“Few people have had a bigger impact on the record industry than Ahmet,” David Geffen, the entertainment mogul, said today in a telephone interview from , “and no one loved American music more than he did.”

Mr. Geffen said that Mr. Ertegun “started me in the record business” in 1970 by helping to finance his own record company, Asylum, “just as he gave many independent entrepreneurs the chance to start their own companies.”

Mr. Ertegun was the dapper son of a Turkish diplomatic family. He was equally at home at a high-society soiree or a rhythm and blues club, the kind of place where, in the 1950s, he found the performers who went on to make hits for Atlantic Records, one of the most successful American independent music labels.

He was an astute judge of both musical talent and business potential, surrounding himself with skillful producers and remaking rhythm and blues for the pop mainstream. As Atlantic Records grew from a small independent label into a major national music company, it became a stronghold both of soul, with Aretha Franklin and Otis Redding, and of rock, with the Stones, Led Zeppelin and Yes.

Ever conscious of the music?s roots, Mr. Ertegun was also a prime mover in starting the Rock and Roll Hall of Fame and Museum in .

Mr. Ertegun said he fell in love with music when he was 9. In 1932, his older brother, Nesuhi, took him to see the Duke Ellington and Cab Calloway orchestras at the Palladium Theater in . The beauty of the jazz, the power of the beat and the elegance of the musicians made a lasting impression.

His instincts were not impeccable. He lost out on chances to sign the Beatles and Elvis Presley. But in an industry in which backstabbing is commonplace, Mr. Ertegun was admired as a shrewd businessman with a passion for the creative artists and the music he nurtured.

Along with a partner, Herb Abramson, Mr. Ertegun founded Atlantic Records in 1947 in an office in a derelict hotel on in . His initial investment of $10,000 was borrowed from his family dentist.

By the 1950s, ?s records had developed a unique sound, best described as the mixed and polygamous marriage of Mr. Ertegun?s musical loves. He and his producers mingled blues and jazz with the mambo of , the urban blues of , the swing of and the sophisticated rhythms and arrangements of .

Mr. Ertegun often signed musicians who had been seasoned on the R&B circuit, and pushed them toward perfecting their performances in the recording studio. Every so often, with his name spelled in reverse as Nugetre, Mr. Ertegun appeared as the songwriter on R&B hits like “Chains of Love” and “Sweet Sixteen.”

After his brother Nesuhi joined in 1956, the label attracted many of the most inventive jazz musicians of the era, including Coltrane, Charles Mingus, the Modern Jazz Quartet and Ornette Coleman. In 1957, Atlantic was among the first labels to record in stereo.

By the 1960s, often in partnerships with local labels like Stax in Memphis, Mr. Ertegun was selling millions of recordings by the leading soul musicians of the day, among them Ms. Franklin and Mr. Redding. Ms. Franklin had recorded previously for Columbia Records, but her hits for ? which merged her gospel roots with an earthy strength and sensuality ? were the ones that made her the Queen of Soul.

Mr. Ertegun?s music partnerships, he sometimes pointed out, were often culturally triangular. He was Turkish and a Muslim by birth. Many of his fellow executives, like the producer Jerry Wexler, were Jewish. The artists they produced, particularly when the label began, were black. Together they helped move rhythm and blues to the center of American popular music.

Mr. Ertegun and Ioana Maria Banu were married on April 6, 1961. Known as Mica, she became a prominent interior designer. She survives him, as does a sister.

The Ertegun brothers and their partner, Mr. Wexler, sold the Atlantic label to Warner Brothers-Seven Arts in 1967 for $17 million in stock. Four years later, the brothers took some of the money and founded the New York Cosmos soccer team.

But Mr. Ertegun kept making records. When the Kinney Corporation ? a conglomerate of parking lots, funeral parlors, rental cars and other unmusical enterprises ? completed the acquisition of Warner Brothers-Seven Arts in 1969, he and his label kept going.

Mr. Ertegun was now a rock mogul. Atlantic Records signed the Stones, Led Zeppelin and Crosby, Stills and Nash, who became , Stills, Nash and Young after Mr. Ertegun persuaded Neil Young to join the group. The corporations changed ? Kinney turned into Warner Communications, which became Time Warner ? but and its founder still flourished.

It remained one of the only record labels of the 1940s to survive the multibillion-dollar mergers and acquisitions of the 1990s in more than name only, with its founder still in charge. Mr. Ertegun reduced his daily corporate duties in 1996 but remained an inveterate night-clubber, avid concertgoer and insatiable music maven well into his 80s.

Ahmet Ertegun was born in on July 31, 1923. His father, Mehmet Munir, was the legal counselor to Kemal Ataturk, the founder of modern .

In 1925, Ataturk sent the elder Ertegun to serve as the Turkish representative to the . Over the next 20 years, he was the Turkish ambassador to , to , to the Court of St. James under King George V and finally to the during the administration. The young Ahmet Ertegun grew up in that worldly realm. His father, then the dean of the diplomatic corps in , died in 1944.

That year, at 21, having earned a bachelor?s degree at in , , Mr. Ertegun was taking graduate courses in medieval philosophy at .

“In between, I spent hours in a rhythm and blues record shop in the black ghetto in ,” he told the graduates of Berklee College of Music in on receiving an honorary degree in May 1991. “And almost every night, I went to the and to various jazz and blues clubs.”

“I had to decide whether I would go into a scholastic life or go back to in the diplomatic service, or do something else,” he said. “What I really loved was music, jazz, blues, and hanging out.” And so, he told the students, he did what he loved.