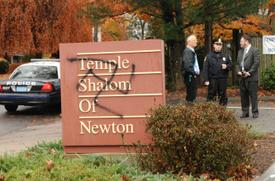 Newton ? Who has done more harm: the scoundrel who committed the senseless, criminal act of spray-painting a swastika on a Newton synagogue; or the national Anti-Defamation League, which has long diminished and denied the Armenian genocide and lobbied alongside Turkey to stop the U.S. from recognizing that genocide? I suggest the latter.

Last year the Newton Human Rights Commission and Mayor David Cohen courageously severed ties with the No Place for Hate (NPFH) program of the ADL due to the latter?s actions against Armenians.

The ADL hopes we?ve all forgotten about that. Summoning up the ghost of NPFH, the ADL has declared that Newton is ?not a place for hate? and used other rhetoric to try to recoup its lost standing.

Though the vandalism incident was atrocious, the ADL lacks the credibility to lecture anyone about hate. The ADL maintains that denial, diminishment, or any questioning of the Holocaust constitutes anti-Semitism and ?hate.? By its own standards, therefore, the ADL is guilty of hate regarding the Armenian genocide. It?s also guilty of major hypocrisy.

Arlington, Bedford, Belmont, Lexington, Medford, Needham, Newburyport, Northampton, Peabody, Somerville, Westwood, and Watertown have, like Newton, castigated the national ADL and dropped NPFH. So did the Massachusetts Municipal Association, which represents every city and town. Human rights advocates, many of them Jewish, have also condemned the ADL?s stance against Armenians.

And Watertown has now demanded that Blue Cross Blue Shield stop sponsoring NPFH. Top ADL officers inside the company had persuaded it several years ago to fund the program.

And, no, the national ADL and director Abraham Foxman have not unambiguously acknowledged the Armenian genocide. Quite the opposite.

Pressed by human rights advocates and Armenians, the national ADL issued a statement on August 21, 2007 that, while it mentioned the word genocide, implied that the Armenian murders were simply a ?consequence? of war and, therefore, not intentional. The ADL knows that ?consequential? deaths are not genocide. The official definition of genocide in Article 2 of the U.N. Genocide Treaty specifically requires ?intent? by the perpetrator. Imagine the ferocious ADL reaction if an Armenian group implied that the Holocaust was simply a ?consequence? of WWII.

The ADL?s slickly worded genocide denial was a blatant demonstration of bad faith. And it didn?t fool the MMA and the dozen cities that subsequently cut ties to NPFH. The ADL statement has never ? never ? been retracted.

The powerful ADL has long lobbied against Armenian genocide resolutions in Congress.   Imagine how the ADL would have screamed bloody murder if an Armenian organization had lobbied against any of the innumerable pieces of Holocaust legislation.

The ADL?s seemingly inexplicable opposition to Armenians is part of a widely acknowledged deal between Turkey and Israel.

?The Jewish lobby has quite actively supported Turkey,? notes Yola Habif Johnston of the Jewish Institute for National Security Affairs, ?to prevent the so-called Armenian genocide resolution from passing.?

The American Jewish Committee is one of the groups she cited. Grilled earlier this year about the Armenian issue, AJC?s Strategic Studies Director, Barry Jacobs, blurted out, ?We are not historians, which is a polite [expletive] way of saying we?re not going to take responsibility [or] make a decision on 1915.? Added Jacobs, ?The position of all the Jewish organizations, including the ADL, was not to have a position on the facts ? we do not think that the Congress is the place to settle this ? that?s the real world and that?s the position of the U.S. and Israel.?

Jacobs once appeared in a nasty, Turkish-sponsored genocide denial film and has pledged to ?champion to the best of our ability Turkish interests in the U.S. Congress.?

But not the ADL. Foxman is loath to back out of his deal with Turkey.
It?s clear that the main ADL agenda is political wheeling and dealing and not, as claimed, universal human rights. The public and ADL?s principled grassroots members have been misled.

The national ADL?s stance against Armenians lends credence to those who accuse it and groups like AJC of exploiting the Holocaust for political purposes and of being insincere about others? human rights. That is a far greater disservice to Jews and humanity than any spray-painted swastika.

*The author is a Newton resident and freelance writer.

Letters to the Editor

Boyajian and the ADL

Concerning Mr. Larry Epstein?s recent letters to both the Watertown and Newton papers [see link for letters below], I feel he is way out of line suggesting that David Boyajian is an anti-Semite.

Mr. Boyajian is not complaining about different views among historians regarding the question of the Armenian Genocide. His beef is with the ADL that lobbys Congress to suppress public information about this atrocity and for not labeling it for what it was ? a genocide.

How does this make Boyajian an anti-Semite, especially when there are many Jewish people and groups that agree with him? Or is Mr. Epstein?s real gripe the fact that a Jewish group (ADL) is being publicly spanked and when that happens it is anti-Semitic for Epstein because nothing Jewish should ever be criticized?

It is unfortunate that Mr. Epstein confuses legitimate criticism of the ADL with anti-Semitism. The ADL leadership has demonstrated its lack of integrity and its hypocrisy not only by refusing to acknowledge the genocide of the Armenians by Turkey, but by actively lobbying for the Turkish government on this issue. Recognition of the Armenian Genocide, like the Holocaust and other genocides, is not a historical issue.

Armenian Genocide recognition is a political issue, and the ADL has demonstrated it does not have the political will or ability to confront this issue head on. And Mr. Epstein should read his history a bit more closely. Turkey was not at war with Armenia; Turkey committed a genocide against its own civilian Armenian citizens.

Genocide belongs to all people have suffered

I wish to comment on the opinion piece by David Boyajian (no relation to me) in the Dec. 24 TAB (?Newton is No Place for Swastikas or ADL Hypocrisy?).

As scholars, countries, public officials and recently even many Turks, have repeatedly recognized the Armenian Genocide of 1915-1923, it?s troubling that national ADL Director Abraham Foxman, and now the American Jewish Committee, would oppose U.S. recognition of my ancestors? genocide.

Jews suffered unfathomable death and suffering in the Holocaust. That should never be forgotten. But genocide cannot be considered the sole domain of the Jewish nation. I hope the ADL and AJC are not suggesting that, because the Armenian Genocide preceded the Jewish one, forthrightly acknowledging it would somehow diminish the Holocaust.

I am an American-born Armenian and served over 33 years in the U.S. Army. I continue to serve my birth country to this day, but

I cannot ignore the firsthand stories I have heard over the years from my parents and grandparents, as Mr. Foxman has undoubtedly heard from his people, that absolutely support the history of the cruel genocide they suffered before making the long journey to this wonderful country.

Genocide does not belong to Jews or Armenians. It belongs to every people who has suffered at the hands of maniacal despots. Genocides in Darfur, Rwanda and Cambodia quickly come to mind.

I ask that Mr. Foxman and the national AJC office reassess their positions and stop blindly supporting Turkey?s denial of the planned and systematic extermination of Armenians on their ancestral homeland.

Photo by Randy Goodman: Newton Police talk with Rabbi Gurvis, right, after the discovery of a spray-painted swastika on the sign in front of Temple Shalom on Temple Street in West Newton, Saturday morning, Nov. 15, 2008.

Newer PostThe ARF: Building a legacy of service to the nation
Older PostՈտնամանները