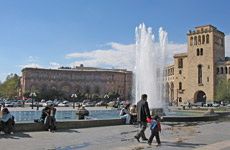 Travelling often means riding the waves of the unexpected and when you are responsible for 14 other people as well, keeping the good ship Itinerary afloat can sometimes feel like one is lashed to the mast in a heavy sea.

But thankfully, travel can also mean serendipitous happenings. So for example when we arrived in the Armenian capital of Yerevan to find our hotel rooms were not ready, it was time to roll out Plan B. So, we drove to the spiritual heart of Armenia, Echmiadzin.

We were several hours ahead of schedule so it was by happy coincidence that the head of the Armenian church, the Catholicus, was just leaving his palace to process to his third century cathedral. I'm sure he didn't realise he was making a tour leader very happy but I was grateful nonetheless.

While bells pealed, the black hooded Catholicus, followed by a procession of clerics, some dressed in purple robes, swept past us, under a porch adorned with watching angels and into the church.

By the time we stepped inside he was now clad in red and cream robes richly embroidered in gold thread and two acolytes were wafting incense around the altar. The choir was singing – magnificent unaccompanied hymns spiralled upwards into the high dome, intertwined in the ethereal blue smoke of the burning incense.

The cathedral was packed with worshippers and onlookers. While the service continued people lit tapers, planted candles in long troughs of sand, crossed themselves, prayed and took photographs.

The next day the guardian angel of tour guides was at work again, this time at the 800 year-old Geghard monastery that is perched on the side of a mountain in a narrow gorge about an hour's drive from Yerevan.

There was no grand service here but a single priest in a white gown, who was also swinging an incense burner – but his was complete with small bells which jangled sleigh-like as he moved from church to rock-hewn chapel.

We ate lunch in the garden of an enterprising local who had turned his property into a restaurant for tourists. Our long table was set under a weeping elm and was crammed with plates of paper-thin bread, tomato and cucumber salads, eggplant coated with walnut paste, fresh goat's cheese and mounds of fresh herbs. Two sweating men toiled over an oven into which they were feeding beef kebabs at high speed. Somehow or another 150 people had turned up for lunch at the same time and the staff were working overtime.

“Why has everyone come at once?” the owner cried in despair, looking around his orchard and its feasting Kiwis, Italians and Germans. But he wasn't too busy to bring our table a large earthenware jug of his homemade wine.

That was something of a mixed blessing as our next stop was to be back in Yerevan at the Ararat Brandy Factory. Last year the factory produced six million bottles of brandy, most of which were exported to Russia. The factory once produced the cognac preferred by Winston Churchill who, it is said, had it sent by the case-load, courtesy of Josef Stalin.

We stood in the giant warehouse in which the barrels are stored before bottling. Among them are barrels presented to leaders and ex-leaders of former USSR republics and one given to one of Armenia's favourite sons, singer-actor Charles Aznavour. The late Boris Yeltsin's barrel is still there but there is a joke that he may have drunk the contents during a visit and it is, in fact, empty.

The factory offers tastings of three vintages, which their guide told us, are always best drunk with good dark chocolate. We obliged.

On leaving the factory, Mt Ararat, symbol of Armenia, although now firmly on the Turkish side of the border, stood bathed in sunlight, dominating the city skyline.

One tour member was contemplating it thoughtfully. “I think it is taller than it was earlier,” she said.

It could have been worse – at least she wasn't seeing two Mt Ararats.

ADDITIONAL READING BY THE SAME WRITER

A spotlit view in Yerevan