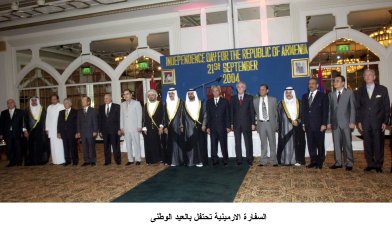 Embassy of marked the Independence Day of Armenia this year by a reception held in the Sheraton Abu Dhabi Hotel on 25th September 2004, from 7:30-9:30 p.m.

Emirates News Agency reports that the UAE Minister of Justice, Islamic Affairs and Awqaf, Mohammed Nakhira Al Dhahiri, attended the reception and was warmly welcomed by Ambassador Dr. Arshak Poladian. The reception was also attended by the Director of Foreign Ministry's Department of Protocol, Obeid Salim Al Za'abi, a number of officials and heads of diplomatic missions (more than the last year).

Some Armenians from Sharjah and came all the way to the capital to pay tribute to this special day.

Ambassador Poladian delivered his welcome note in Arabic and Armenian. Foreign visitors who did not speak those languages (including Ambassadors) were left without any clue about the message. Instead they were offered to follow a video tape about tourism aspects of (in case they missed to see the same video a year ago during the same occasion). A grammatical mistake was noticed on the giant signboard behind the celebrants. Outside the celebration hall, people were struggling to find proper parking, in an area that is undergoing extensive construction works.