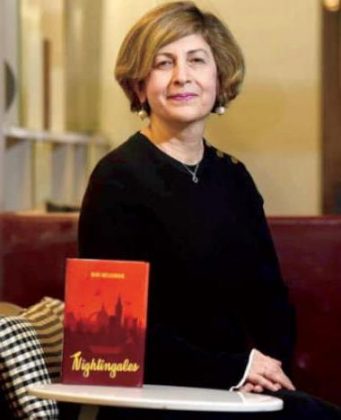 Melkonian expressed her views during a language workshop organized in Cairo on the occasion of the International Day of the Arabic Language, which falls on December 18th of each year, and also in the context of the centennial celebrations of the American University in Cairo.

In a report published in the “Asharq Al-Awsat” London based Arabic daily (19 December 2019) by journalist Dalia Assem, Mimi Melkonian says: “My students are Americans interested in learning Arabic. We have three schools that teach Arabic in the State of Connecticut. Many private schools in Washington DC and elsewhere teach Arabic besides other languages”.

Mimi Melkonian is a Lebanese Armenian currently living in the USA. She published her first book in November 2018, under the title: “Nightingales, True Stories of Escape, Hope, and Resilience,” about Syrian migrants, highlighting their significant contributions in the countries where they are now residing.

Melkonian says students are traveling to Jordan, Morocco, Tunisia and Lebanon for summer programs of the Arabic language. She usually accompanies her students in tours to the Arab world, to acquaint them with the people. “We travel to know about the different Arabic dialects and to understand the people,” she elaborates.

Melkonian believes that the students’ passion for Arabic literature may come in the future after mastering the language. “Western societies have a big demand for learning the Arabic language. This is necessary, especially with the arrival of tens of thousands of displaced peoples in Europe and North America. It helps in creating greater understanding and facilitates their integration”.