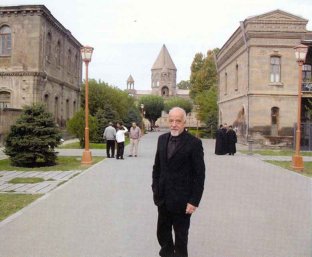 AZAD-HYE (7 November 2004): They used to say that has changed and reading a book is not any more a favored hobby. New media and entertainment sources have occupied the minds and the hearts of the new generation.

But his proved false when, a month ago, internationally famed Brazilian writer Paulo Coelho visited . Suddenly he conquered the headline news. The Public TV, which is also viewed abroad, covered extensive parts of his trip to Armenia and the meetings he had with ordinary fans and with prominent personalities as well.

Hovhannes Yeranian of “Yerkir” daily (8th October 2004) describes the meeting in the Writers Union with warm words: “The hall of the Writers was packed on 6 October 2004. I can?t remember any other recent occasion when so many people came to the Writers Union ? Coelho, one of the most widely-read writers in the world, was impressed by such a warm reception by the Armenian readers“.

During that meeting two translations (in Western and Eastern Armenian) of Coelho's famous book “Alchemist” were presented to the public, published by Van Arian and Vahe Satian publishing companies in .

The president of the Brazilian International Union of Journalists was also visiting together with Paulo Coelho, with the purpose of publishing series of articles on and the Armenians.

Coelho said that there is something mystical when a writer meets with his readers. He disclosed that he had planned a long time ago to visit . He noted that he considers as a “mystic” country and a place for pilgrimage, especially that it is the homeland of so many Armenians who live around the world. He expressed hope that one day Armenians will return to their homeland.

Azad-Hye.com recommends its readers to buy a copy of the Armenian translation of Coelho's book “Alchemist” in the language of their choice (Western and Eastern languages).