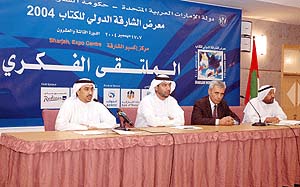 AZAD-HYE (10 December 2004): During the year 2004, the Embassy of Armenian in Abu Dhabi established active contacts with the local UAE press, publicizing and promoting Armenian subjects. As a result of this informative campaign the Arab reader became aware of and its people and culture. It was interesting to find some journalists writing on Armenian subjects out of their own experience and reflections.

One of these writers was Ammar Al Sanjari of Sharjah Arabic-language daily “Al Khaleej”, who visited during the Summer of 2004 and wrote lengthy articles about his memories and encounters there. In one of his latest writing he confesses that the Arab press depicts the Caucasus as a trouble spot and a war scene, but he himself was surprised to see as a peaceful and extremely safe city. “It is unbelievable, until you witness everything yourself and understand how friendly and peace-loving is the Armenian character. Tourists are not chased, people do not look at them suspiciously. In contrary to many other Eastern European or ex-Soviet capitals, foreign visitors are not potential victims. Everything in is lovely, even the nature has granted the special stone with which the traditional buildings and monuments are erected” (“Al Khaleej”, 7 December 2004).

Since January 2004 the “Centre for Documentation and Research” of the UAE Presidential Court started publishing a monthly periodical called “Liwa” (after a famous oasis in the UAE). Ambassador Dr. Arshak Poladian published the following articles in five different issues of this periodical:

-Issue no (1), January 2004: “Pages from the history of the Armenian-Arab relations”

-Issue no (11), November 2004: “The status of Arabic language and its role in the Arab and Islamic Civilization”.

-Issue no (12), December 2004: an article dedicated to the late President of the UAE Sheikh Zayed bin Sultan Al Nahyan, who passed away on 2nd November 2004 and was a friend of the Armenians.

The Armenian Cultural Week in Sharjah (11-17 December 2004), will be another occasion for close contacts between Armenian and UAE officials, artists, intellectuals, ordinary citizens, etc. See the program of this cultural week in separate correspondence.

During a press conference on 8th December 2004 the officials of the Department of Culture and Information in the Government of Sharjah announced the details of the program of the “Armenian Cultural Week”. Abdallah Al Oweis, General Director of the Department underlined that this event shows how deep are the relations between and the UAE “reflecting the historical ties between the Arabic and Armenian cultures“. He said that there is an urgent need to strengthen the relations between nations, especially in recent times. “the Armenian Cultural Week is taking place within this wider framework“, he underlined.

The Director of Arts in the Department Hisham Mazloum described the main features of the upcoming cultural week and confirmed that a three year executive program will be signed during the visit of the Armenian Minister of Cultural and Youth Affairs (“Al Bayan” Arabic-language daily, 9 December 2004).

During the Armenian Cultural Week in Sharjah a booklet will be published called “ today”, written by Ambassador Poladian.

It was interesting to read a comment by journalist Ayyash Yahyawi in the daily “Al Khaleej”, on 9th December 2004, titled “The Aroma of Armenia in Sharjah”, in which, after giving a brief account on the visit of UAE artists to Armenia two months ago, he notes that now it is the turn of the Armenian artists to visit Sharjah and present their country's folklore and different aspects of art and classical music. He stresses that this cultural festival (the Armenian Cultural Week in Sharjah) is the result of the determination of Sharjah “to revive the historical and cultural ties with nations that had close cultural ties with Arabs, in its wider socio-economic context also, such us the Armenian nation, whose institutes are rich with manuscripts of Arabic and Islamic Heritage and whose traditions are immersed in the spirit and the beauties of the East“. He concludes that “the return of the Arabs to their historical roots, which could be seen in this urge to contact neighbouring nations of Eastern Europe and is an utmost need in both political and cultural aspects“. He ends his comments saying “for all these reasons, welcome to our brothers in history and culture, welcome to the Armenian Cultural Days in the bosom of Sharjah, these days that we already smell their magical aroma before even they are taking place” (“Al Khaleej”, 9 December 2004).

Upper-Left Photo: Sharjah offiials and Ambassador Poladian during the press conference of 8th December 2004, briefing about the “Armenian Cultural Week”.